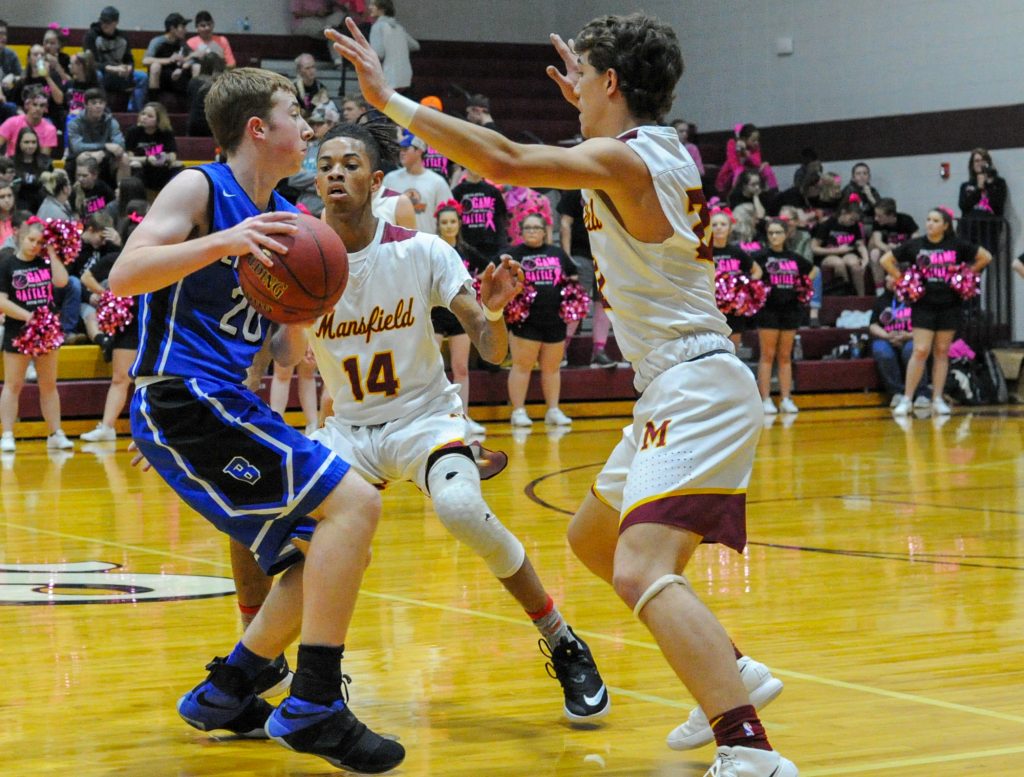 MANSFIELD – The Bradleyville Eagles are a team that is still growing and gaining the experience to fill the bench with seasoned athletes.

Since their 95-70 losing run-in with the Ava Bears on Dec. 11, the Eagles have since matured and become better ball players who have pulled seven wins this season.

Earning turnovers and managing the game’s pace, the Eagles were able to hold a near-tied game through the first quarter.

The Eagles kept pace with the Lions, matching 10 of 11 points to start the game.

Ethan Todd and Brady Rogers would both have a big night with a combined 36 points against the Mansfield defense, but those points wouldn’t hold up as Mansfield got their gears going and started outscoring the Eagles in second quarter.

Going into the second, the Lions would open up and tack-on 20 points before the half to lead Bradleyville 31-23.

Payton Watterson, who lead the Lions with 21 points, sunk a three and chipped in twos for eight points. Backed by another 12 combined from Jay’lan Williams, Dylan Caruso and Hesston Gray.

Watterson would continue to be an unwearied force through the remainder of the game.

The Lions had an 8-point run in the second to add to Bradleyville fouled for a bonus situation at 2:37 left in the half for seven points before the break.

“The foul trouble… Well, Mansfield’s offense is good,” said Hume. “They are athletic and talented, they can beat you inside and out. Our kids don’t match up well with them and it puts them in a position to where we are vulnerable to fouls. We play the more seasoned kids on our team and they put a lot of minutes for us, especially in a game like this.”

Down by eight at the half, the Eagles returned from the locker room looking to somehow calm the pressure put on the team by the Lions’ aggressive style of play.

The Eagles were able to cool off some of Mansfield’s offensive players, but there was no stopping Watterson who would come back from the break and sink 9 of 15 points for the Lions in the third quarter.

The Eagles would also have a better quarter, scoring ten with twos from Todd and Caleb Blair, plus two free points from a fouls drawn by Rogers.

The Mansfield defense was matching well against players on the Eagles bench, but Hume had a plan for his players to keep Mansfield from running too far ahead with the game.

“They played man-to-man, and we anticipated that,” said Hume. “Our goal was to stretch them out and eat a lot of clock. Spend a lot of time controlling the tempo, our kids did a pretty good job doing that this game.”

As the Eagles tugged the Lions’ defense out to the perimeter, Brady Rogers would go ahead on the paint for ten points in the fourth quarter, ending the game with a high of 19 points.

Ethan Todd also racked-up double digit points with 17 with five of those made from the charity stripe thanks to a bonus at 4:36 and a double bonus with 2:21 left in regulation.

The Eagles would shoot at a collective 65-percent from the free-throw line, earning 11 points courtesy of the Lions.

However, the Lions would shoot a bit better at 73-percent, making those 11 points back in 15 attempts at the steel hoop on fouls, leading 74-51 at the sound of the final buzzer.

Mansfield’s Watterson would score 21 on the Eagle defense with 7 twos and 2 threes with three rebounds.

Aided by 13 a-piece by Caruso and Gray, the trio made up about 64-percent of the game-total scoring by the Lions.

The Eagles’ performance appears to have improved with more turnovers and rebounds in a game against an already impressive Mansfield team.

“Big part of it is getting in the flow of the season,” said Hume. “It takes a few games, a learning curve kind of thing.”