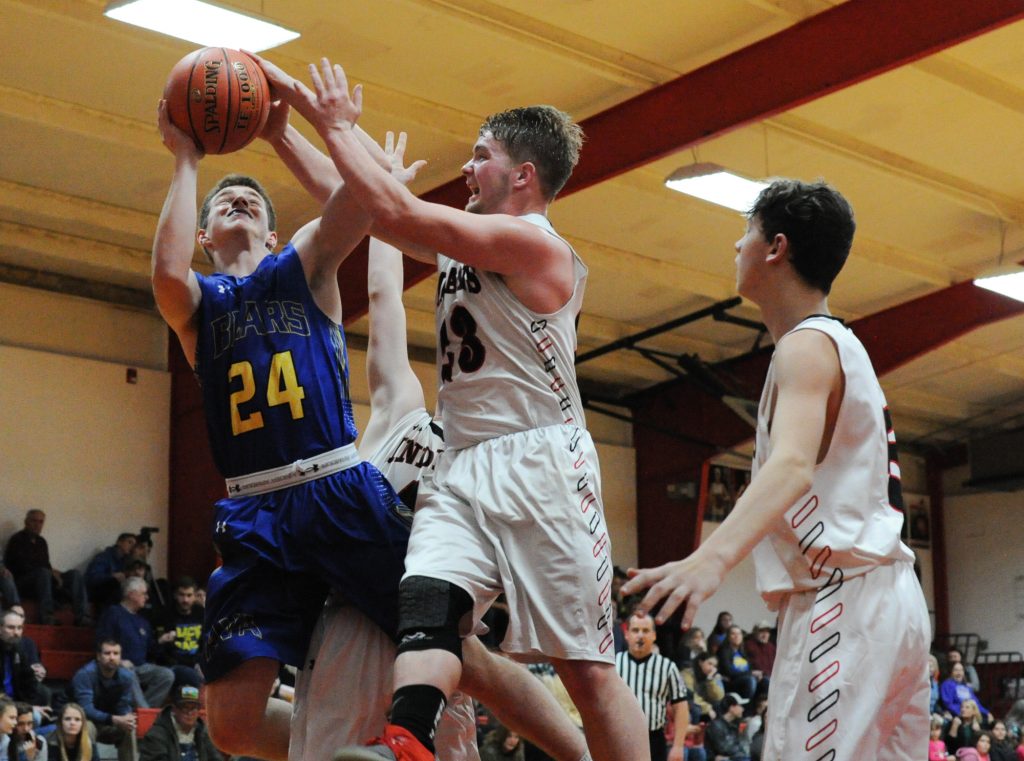 THEODOSIA – Out for two game, Nate Swofford made an in-game appearance for 13 points before taking time to continue recovering from an ankle injury sustained against Hollister on Jan. 4.

“I think physically he’s close to 100 percent,” said coach Mike Mallow. “It kind of takes you time to get back in the rhythm and the feel of the game.”

It was the perfect game for Swofford to try-out the ankle and brace he put on before warming up with his teammates before having a great second quarter for the Bears.

“Everything said, I thought I thought he had a nice game and he played some point for us,” said Mallow. “I thought about putting him in late just to run the point and tell him not to shoot. With the ankle being a little tender, we don’t want to twist it in a 50-point game. So we kept him out.”

The ankle would not keep him from dominating in the lane during the second quarter for 11 points as Ava forced turnover-after-turnover in an all-out offensive effort against Lutie.

The Bears set the tone early with 26 points in the first quarter. Blake King, who’s point average is usually in the teens, had a season-high 20 points on the road, sinking a three and chipping in twos for seven to start the game.

Andrew Dalton would capitalize on mistakes by the Lutie offense, tossing-in 8 points on top of King’s seven.

Twos from Tom Emerich, Caleb Johnson, and Drake King would make up the other 11 points for the Ava offense.

Racking up an 18-point lead in the first, the Ava defense held Lutie to just 8 points while steals and intercepted passes led to a run of nine for the Bears.

The pressure wouldn’t let up as the Bears continued to run away with game, adding another 24 to the board in the second while Lutie was held to just a single three by Andrew Ault.

The second was Swofford’s game, with 11 points from 4 two and a three on the Lutie defense.

Blake King and Emerich each added four along with twos from Mason Cole and Blayne Mendel.

At this point, Blake King had already tallied 11 points in his name, largely in thanks to the high volume of turnovers made mid-court.

“Well, I think a lot of it was turnovers,” said Mallow. “He had the ball in the open court.”

Even with the points stacking up for Blake, he didn’t forget to make points as a team and left an impression on Mallow.

The Bears were in high spirit as they left the court with a dominant 50-11 lead.

With the gears turning and team working as well as they were, one could believe it was all orchestrated by the coaching staff and the bench. This wasn’t the case for Ava since Mallow decided to let the boys play ball and figure things out for themselves on the court.

“I didn’t call maybe three or four plays all night,” said Mallow. “We have some motion type offenses that you might have heard me call. But in terms of set plays designed for a certain kid… (I called) maybe three or four all night. The rest of it was just them playing basketball.”

Playing loose and in good spirits, the Bears came back from the locker room  to add another 19 to the visitor’s side of the scoreboard with numerous turnovers and steals to add to the damage done in the first half.

“You just keep working at it and work on it every day,” said Mallow. “Some (games) you don’t match up and so-forth, but we were able to turn it over a lot a. So did a pretty good job at that.”

Blake King delivered another big performance in the third with 9 points backed by a combined ten from Emerich, Swofford, Johnson, and Zack Miller.

With turnovers and the game playing out at mid-court, many able players found themselves in easy or uncontested layup situations.

“I feel bad about the score,” said Mallow. “But know we went back with the press and just played well and executed well, especially in the open court.”

Lutie would only make-up six of those points before getting silenced in a fourth-quarter shutout by some of the younger Ava players. With nothing to show for several attempts at the steel hoop, Lutie High would end the game at just 17 points.

Meanwhile, the younger Ava Bears had some court time to keep working on the skills needed to develop into seasoned players in the coming year, or two.

Mason Cole would chip-in 4 points, aided by twos from Dylan King, Blayne Mendel, and a three from Quinton Donley.

It was the final nail in the coffin for Lutie which made the biggest statement for the Bears.

To conclude the night with four points, Jacob Gillies would find himself open with nobody between him and fulfilling the urge to make a mark.

Dribbling to the hoop after a long-court pass, Gillies would dunk the final bucket to seal-the-deal at 84 points for the Bears.

“You know, you’ve got a chance to dunk it, kids dream for that,” said Mallow. “I’m fine with it.”

In addition to the 20 from Blake King and 13 from Swofford, the Bears would feast on points with Tom Emerich and Caleb Johnson each scoring 9 points, Andrew Dalton with eight, Mason Cole with six, and another 17 from across the Ava bench.

The Bears are now on a two-win streak and will face Sparta at home on Jan. 18. with an 8-5 overall record. 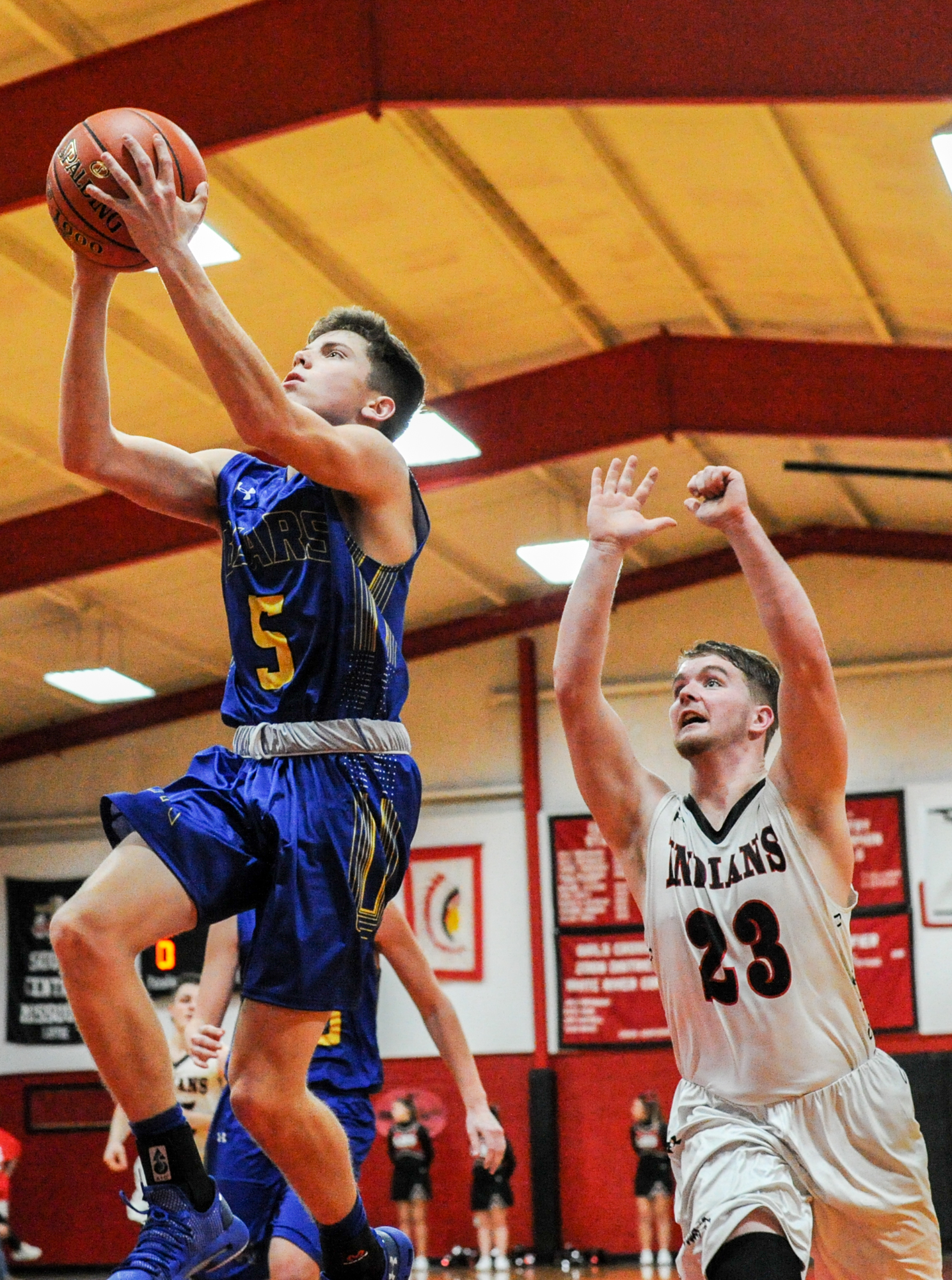