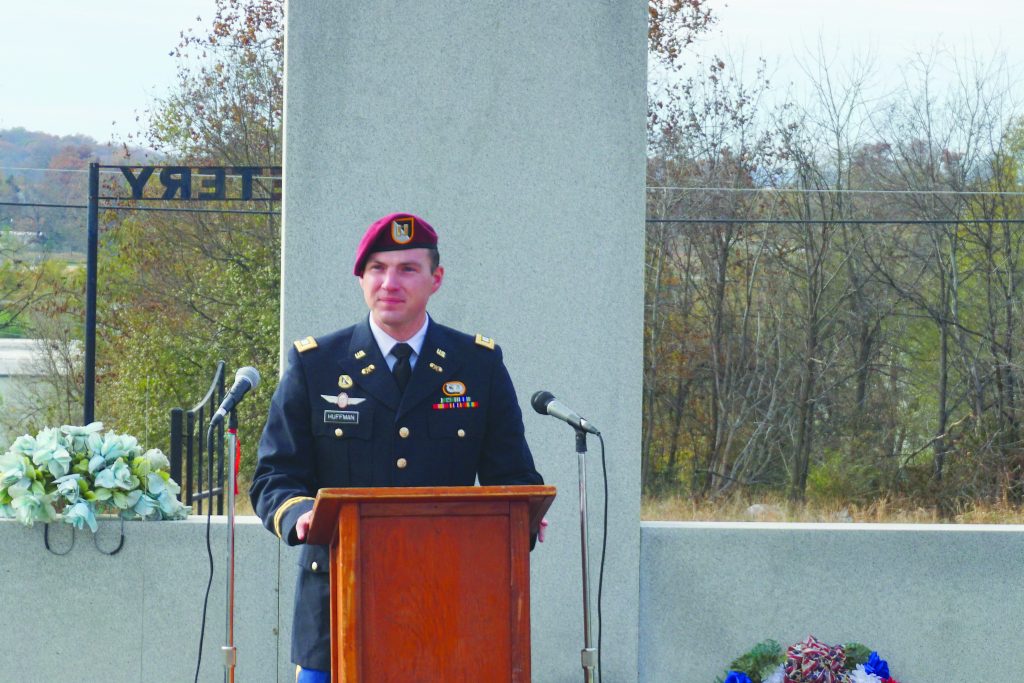 Captain Ben Huffman, an Army chemical warfare specialist, was guest speaker during the annual Veterans Day ceremony held at the Ava Cemetery on Sunday, Nov. 11.  Captain Huffman, who is stationed at Fort Bragg, North Carolina, is the son of Gail and Scott Huffman, of Ava.

(AVA-MO) – Veterans Day was originally created as “Armistice Day” in the year 1919, on Nov. 11; this action occurred upon the first anniversary of the end of World War I.

In 1926, Congress passed a resolution for an annual observance, and in 1938, Nov. 11 became a national holiday.

Today, Veterans Day pays tribute to all American military veterans, whether living or dead, whether service was during war or in time of peace.  The day also honors and gives thanks to those currently in military service to our country.

This past Sunday at 2:00 p.m., the American Legion Troy Herd Post 112 and Veterans of Foreign War Post 5993 Russell T. Scott, were hosts to the annual Veterans Day ceremony at the Ava Cemetery.  The event was emceed by American Legion Commander Danny Letsinger and VFW Commander Scott Huffman.

Mayor David Norman provided a welcome, with opening remarks acknowledging the Ava Cemetery as one of the most beautiful places in town, a peaceful place to visit.  The Mayor briefly touched upon the Vietnam War era, and how public attitudes have changed toward Vietnam and Korean veterans.  And that today, all military veterans are excepted and honored for service to the United States.

Guest speaker Captain Benjamin Huffman, an Army chemical warfare specialist, noted most families have military stories that have been passed down through the generations, and it is likely many trace back to the Civil War.  Speaking personally, of his own family members, Captain Huffman mentioned several who served, including his grandfather Dorsey Huffman, great-uncle Kelly Huffman, and great-uncle Buddy Burdue, who served in the Navy fighting Japanese in the South Pacific.

Huffman noted as Americans we can watch war documentaries in movie theaters and on television, but talking to those who serve gives a much different perspective, and important insight.  He advised everyone to thank a veteran for their service, but also take time to ask important questions, such as what was their favorite experience or maybe, what they hated the most.  Start a dialogue, for history.

First Lieutenant Elizabeth Huffman, Captain Huffman’s wife, placed a patriotic wreath at the foot of the Veteran monument memorial which stands in the lower segment of the cemetery.  Elizabeth is a combat engineer officer who also serves at Fort Bragg, in North Carolina.

The ceremony closed with taps and a gun salute, and remarks from American Legion Commander Danny Letsinger who fondly remembered Ava resident Etcyl E. “Cokey” Burchell who served in WWII.  Letsinger applauded Burchell, who as a prisoner of war survived the Bataan Death March of 1943. The Bataan march is recognized as one of the greatest inhumanities of WWII.  Letsinger said Cokey was able to endure the trial, returning to Ava whereupon he lived a full life.  According to the grave site, Cokey Burchell died in 1979.

The American Legion and VFW also hosted a pie supper and ice cream social at the American Legion building following the cemetery ceremony.  Several artifacts, a gas mask, and other war mementos were on display, all from local families or the Douglas County Historical Museum.

In recognition of Veterans Day and the 100th anniversary of Armistice Day, Adjutant Tommy Roberts and Senior Vice Commander Josh Swainston performed a POW/MIA Remembrance Table Service, in recognition of those lost in war.  The ritual was facilitated by the VFW.

In addition to these ceremonies, veterans were also recognized throughout Douglas County as many churches, families and community members took the opportunity to honor and acknowledge the many sacrifices of military personnel. 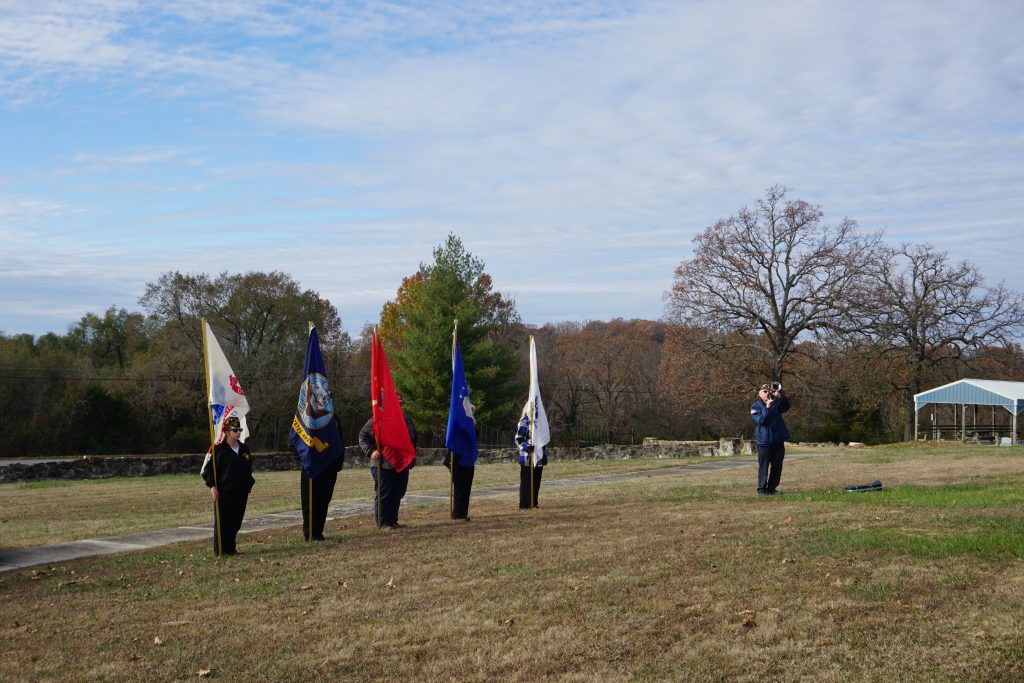 On Veterans Day, during the closing segment of the ceremony at the Ava Cemetery, the color guard is shown above standing at attention, while taps is played. The flags represent different branches of military service. 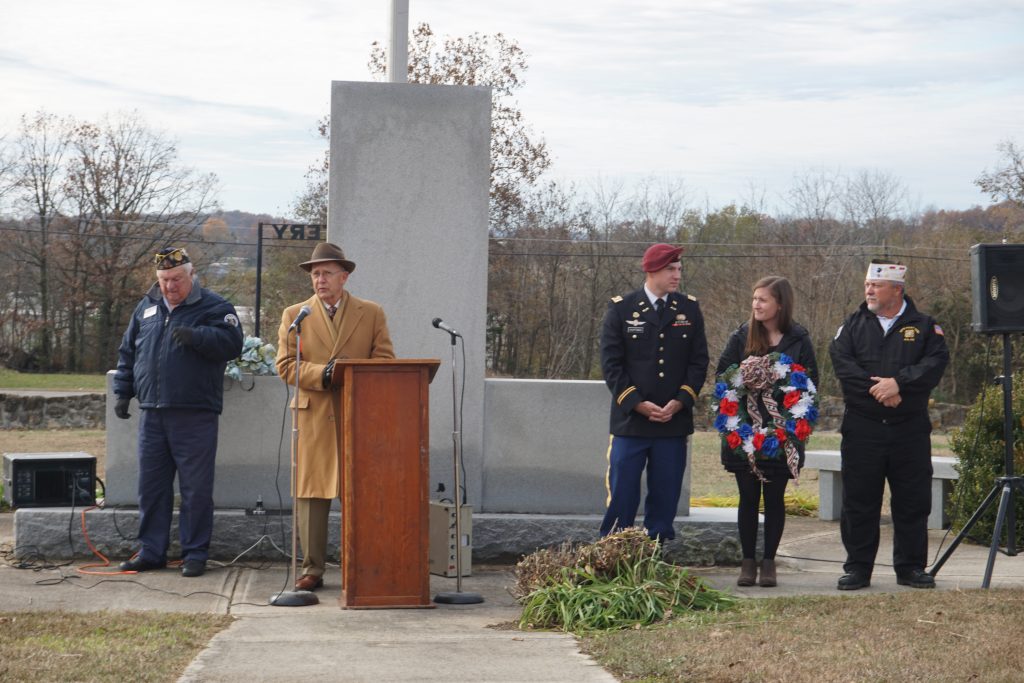