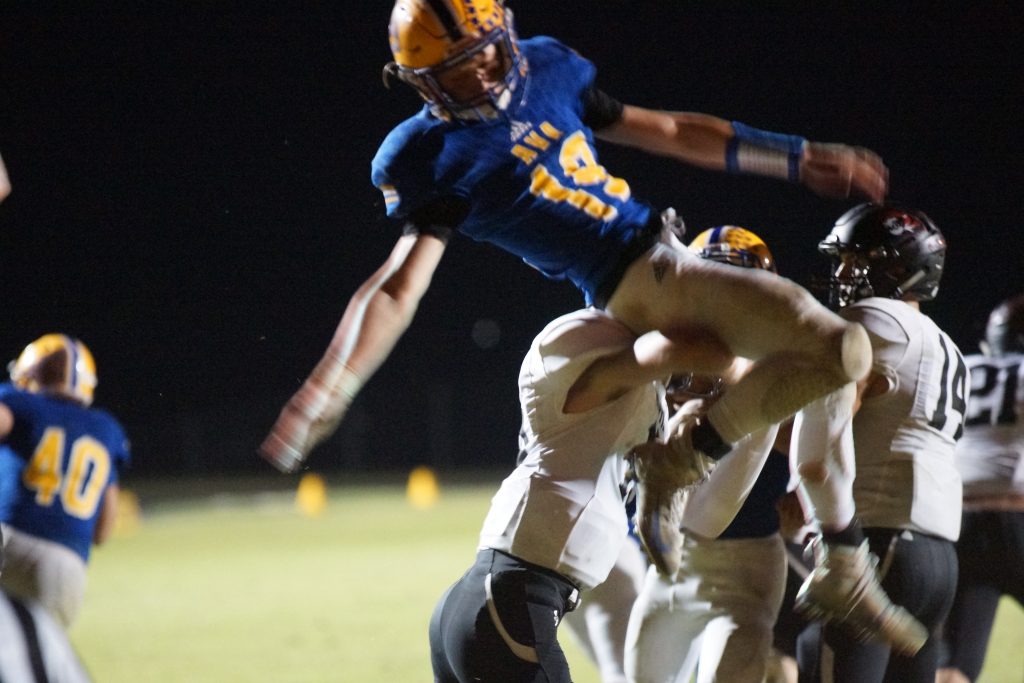 The Ava Bears were flying high again this week as they shut out the Houston Tigers 29-0.

An early sunset, with lights on and the stadium full, it was time for another SCA conference game. The Bears, hosted the Houston Tigers, for what might end up being the championship game for the SCA conference this year.  With Houston beating Thayer last week, if Ava covered the Tigers this week it would put Ava undefeated in conference play with a great chance to win the conference, if they continue to play as well as they have the previous two games.

Ava started the night out with the ball, but had trouble moving it down the field due to penalties, forcing them to punt the first possession.

We know from past weeks our defense has been able to shut teams down, and that’s exactly what they did. Houston’s offense is not able to get any room, with the play calling of Coach Swofford. The Tigers had a tough time getting any yards early in the game, despite having a very large front line and fullback.

The Bears, on their second possession of the ball, are able to make something happen. Using their workhorse, Kayden Myers, the Bears are able to get great field advantage. Some misdirection, a fake handoff, and a big block on the corner, Nate Swofford was able to get the ball in the end zone at the 7:08 mark of the first quarter. Caleb Johnson’s pass to Zach Mendle, for the two point conversion was also good, putting Ava up over Houston 8-0.

Again in the first quarter of play, a great pass from Caleb Johnson to Steven Copeland starts a drive for Nate Swofford to run the ball in once again. Kaden Myers in for two, putting Ava over Houston 16-0, at the 3:20 mark of the first quarter.

The defense of the Bears, able to hold the Tigers on a big third down, early in the second quarter as the Tigers threatened.

A big run by Caleb Johnson, on a play action fake, took the ball across midfield, setting up Steven Copeland to get the ball in the end zone. Caleb Johnson’s point after kick was good, putting the Bears up on the Tigers 23-0 at the 8:49 mark of the second quarter.

The battle of the third quarter, the defense of the Tigers seem to pick it up a notch, making it difficult for the Bears to move the ball down the field. The Bears defense was able to keep on doing what they have been doing the past couple of games, shutting out the opposing offense. They were able to continue right through the fourth quarter.

Caleb Johnson’s pass to Kayden Myers sets up an outstanding drive, in the latter part of the fourth quarter. With less than 5 minutes left in the ball game, Nate Swofford scores from 11 yards out, sealing the game for a 29-0 win over the Houston Tigers.

Ava will travel to Thayer Friday night.  With a win over Thayer, Ava will more than likely have the conference title this year.

I want to thank the fans of the Ava Bears, as they showed love to the Houston community. A former Houston Tiger passed away this week and the fans took up an offering, raising over $2,000 in sixty seconds to help this family. I am grateful to live in a community that works together to help others.