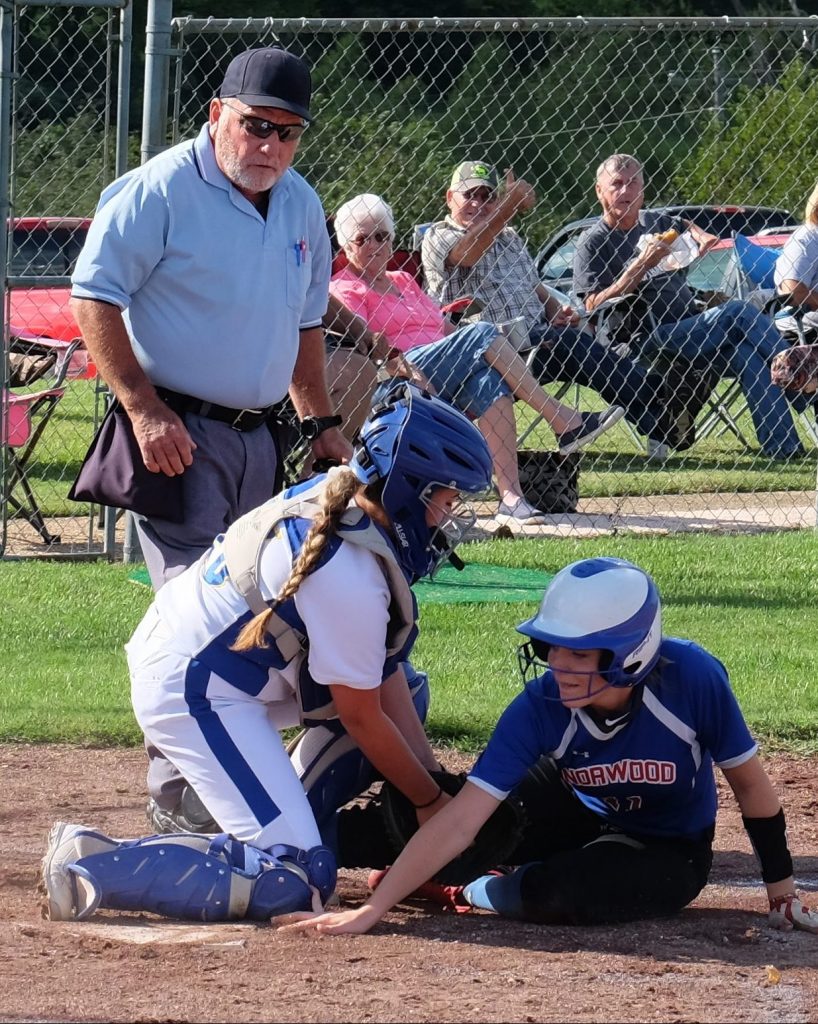 Miquia Heinlein applies a tag on the runner, for a second time, after dropping the ball on the initial tag. The runner was called out by the home plate umpire, holding Norwood scoreless in the 1st inning Monday in Ava.

With Gracie Heinlein pitching all three games this past week, the Lady Bears travelled to Hillcrest High School to take on the Hornets last Thursday afternoon.  After finding themselves down early on single runs in the 1st and 2nd innings by the Hornets the Bears clawed their way to a 5th inning lead only to see it evaporate during a 4 run outburst by Hillcrest in the bottom of the 6th. Ava was unable to muster a 7th inning comeback as they fell to Hillcrest 6-3.

Ava scored all their runs in the 5th with 2 outs, highlighted by a two run single by Jada Gunter scoring Ashton Bewley and Miquia Heinlein.

Gunter, Bewley and Julia Henry each ended the game with 2 hits. Macey Phillips and Regan Koop accounted for a hit apiece as Hillcrest held the Bears to 8 hits over the 7 innings while striking out the Bears 5 times against 4 walks.

Monday afternoon the undefeated Norwood Pirates came to town to face the Lady Bears. Norwood was unable to capitalize on early scoring opportunities as the Bears slipped into and out of trouble in the first 3 innings, including a play at the plate, in the 1st, that drew the ire of the assembled Norwood crowd and coaches as Miquia Heinlein blocked the sliding Norwood runner, but dropped the ball on the initial tag before reapplying the tag on the runner just before she touched home plate with her right hand. As the game progressed from that point Norwood’s coaching staff had plenty to say about the play, and the home plate umpire’s strike zone, until a mid-inning meeting with the home plate umpire late in the game, seemed to quiet the building tension.

The Bears finally broke open the scoreless tie in the bottom of the 4th. Miquia Heinlein led off the inning with a single to center field then was lifted for courtesy runner Hailey Nelson. After Hailey stole 2nd, Jada Gunter was able to draw a walk. Devin Rowe then came in for Gunter standing at 1st. Taylor George bunted on the first pitch, but an error by the Norwood pitcher allowed Nelson to come around and score as George was thrown out advancing to 2nd on the play. Julia Henry drove in the second run of the inning as she ground out to 2nd allowing Rowe to score, putting the Lady Bears up 2-0.

The lead would prove to be more than enough as Heinlein shut the Pirates down in the remaining three innings and, after Ava tacked on an insurance run in the 5th, thanks to a Miquia Heinlein RBI single, the Bears would finish with the win 3-0. Gracie Heinlein struck out 3 while only giving up one free pass to the Pirates to go with 4 hits. Ava collected 7 hits, striking out 6 times and only walking once.

Tuesday afternoon offense was on the menu as the Lady Bears and the Glendale Falcons scored a combined 28 runs. Ava behind Gracie Heinlein’s strong start, giving up only 3 earned runs, pulled ahead 12-4 by the end of the 5th, enroute to a 18-10 victory.

With 20 hits, the Bears hitters all enjoyed at least one hit with Macey Phillips and Ashton Bewley each collecting a team high of 4. With plenty of Bears on the bases Bewley paced the team in RBIs with 6. Ava committed 5 errors leading to 7 unearned runs for the Falcons while Ava was able to score their 18 runs on only 1 Glendale error.

The Lady Bears travel next to Gainesville to battle the Bulldogs this afternoon, then on to the Bakersville Tournament Sept. 15 followed by a home game with Hartville Sept. 18 at 4:30 p.m.