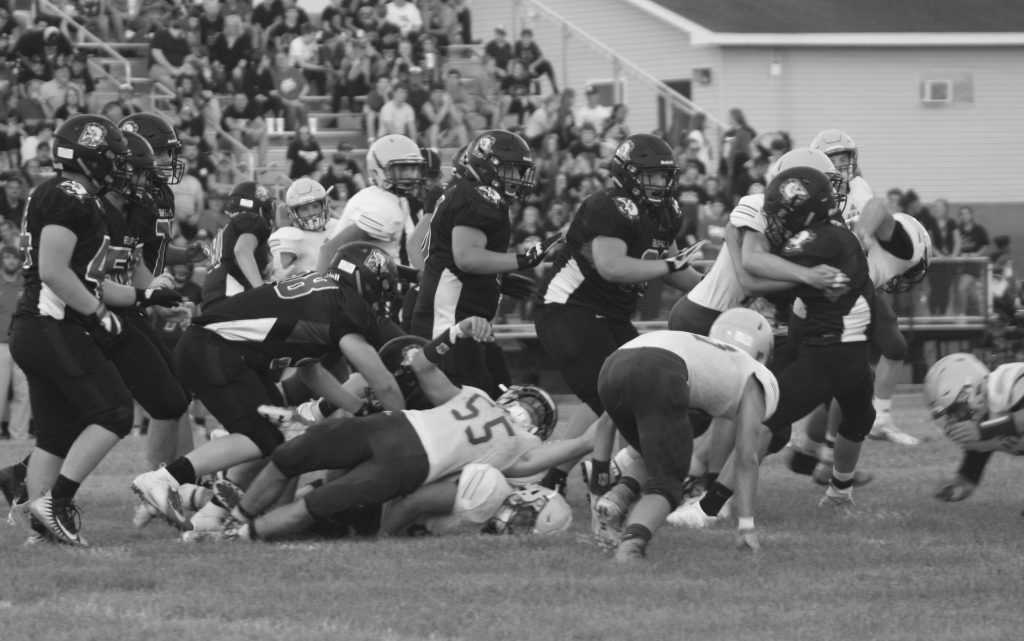 There were high hopes from the fans of Ava Bears football Friday night, as they faced the Buffalo Bison, in the season opener.

“You have got to watch that quarterback, he is one of the fastest kids in the state” was the talk from Bears fans, in attendance. With a big line and a speedy quarterback, Ava knew they would have to come out and play clean, aggressive, football, and thats just what they did, early on.

Ava won the toss and deferred receiving to the second half. With Buffalo on offense first ,a big defensive stand by the Ava line held Buffalo and got Ava the ball, on offense.

In a fashion that Ava fans are getting used to seeing, the Bears offense, behind Ivek Chittendon, Tanner Murray, Anthony Merriet and Cody Prock marched down the field using Kayden Myers’ power and Josh Bray’s speed, at the 5:28 mark of the first quarter Caleb Johnson scored from one yard out, behind Chittendon and Myers, to put the first 6 points on the board. With a pitch from Johnson to Swofford, Ava sealed the two point conversion, giving the Bears an 8-0 lead.

The Bears had a rough time bringing down Cody Smith, the Buffalo quarterback, with his slick misdirection and lightning quick speed, but still Ava made Buffalo punt twice in the first quarter, holding their ground defensively with Mendel and Skiles playing on the corners and Bray and Myers up the middle.

Opening the 2nd quarter with Buffalo still deep in Bear’s territory, Ava was called for a pass interference penalty, which moved Buffalo down to the 24 yard line. Although Ava was making a great stand on defense, pushing the Bison to 4th down, Smith was able to score on 4th and goal from the 1 yard line. An incomplete pass on the two point conversion attempt, kept Ava in the lead at the 8:09 mark of the second quarter, 8-6.

With Buffalo back on defense, they were able to show great pursuit on the corners and stopped Ava on fourth down, with a nine yard loss, which, once again, gave Buffalo great field position to work with. Cody Smith and Buffalo wasted no time scoring on a quarterback sneak, from one yard out. The point after kick put the Bison up 13-8, to end the first half of play.

The Bears got the ball starting the second half, with Myers continuing to move his legs and Swofford getting some big blocks on the corners. Ava moved the ball inside the 25 yard line but a ‘man in motion’ penalty helped stall the drive, with the Bison stopping the Bears on 4th and 3 inside the 20.

Ava’s defense wouldn’t break, forcing Buffalo to line up for a punt on the ensuing possession, which allowed the Bears speed, on special teams, to bust the play and gave the Bears the ball on the 20 yard line, with a short field to work with. The Bears were able to quickly capitalize and Johnson ran it in for a touchdown, putting the Bears back on top. Bray ran in the 2 point conversion making it Ava 16 Buffalo 13 at the 1:31 mark of the 3rd quarter.

Ava’s defense struggled to keep Smith from the big play, in the fourth quarter, with a very debatable pass interference penalty called on Ava once again, early in the 4th quarter. The Bison threatened with the ball inside the 20 yard line, but several hard hits from Ava, including one that caused a Bison fumble, Ava was able to recover the ball and go back on offense.

On the drive, Buffalo was able to hold the Bears to 4 downs, forcing Ava to punt. Johnson, with a stellar kick to the Bison’s 30 yard line, left Ava fans praying that their defense could hold Buffalo for the next 8 minutes.

Josh Bray and Cody Prock made some big defensive stops, to drag the Bison to 4th and 2, but Ava wasn’t able to hold Buffalo from getting the first down.

Keaton Rackley got to the outside of the Bears defense with a 25 yard run, to get the Bison back to great field advantage again. Then, Smith finished off a 72 yard drive from the 20 yard line, putting the Bison back in the lead. With the point after attempt good, making it Ava 16 Buffalo 20, with less than 4 minutes left in the game, Ava couldn’t get through the line of the strong Buffalo Bison defense, with the game ending and Ava coming up just short.

Ava will take the long drive to Hallsville, Missouri, Friday night, to face an unfamiliar team, that’s reportedly comparable to Buffalo, in skill.