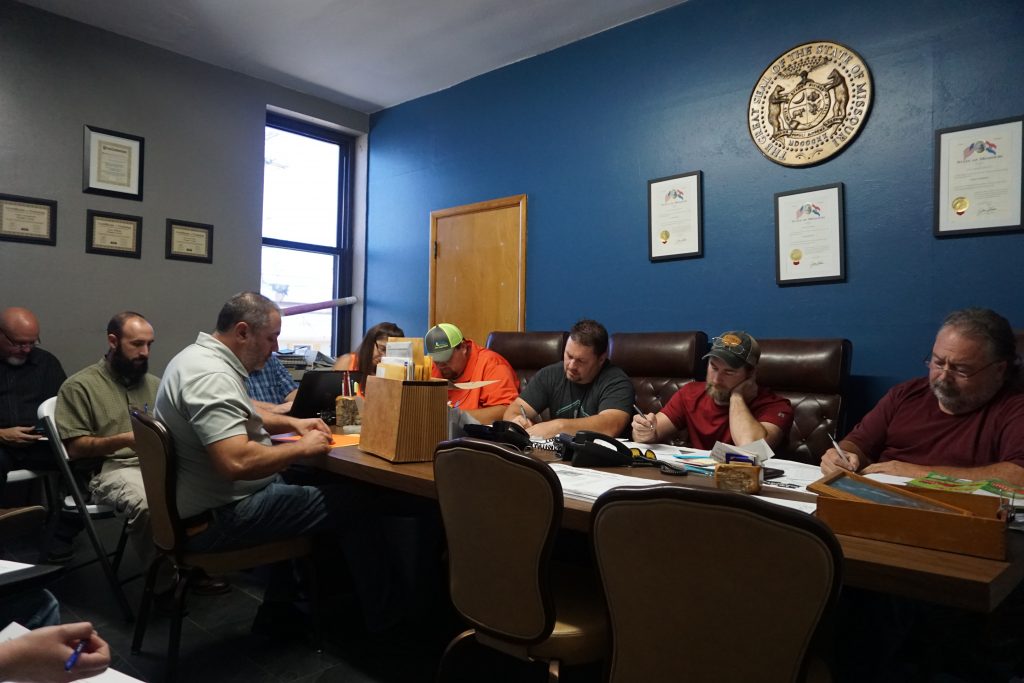 Presiding Commissioner Lance Stillings, along with District No. 1 Commissioner Lawson Curtis, District No. 2 Commissioner Craig Cunningham, Sheriff Chris Degase, and Karry Davis, County Clerk were present for a meeting on Wednesday, August 29 in the Douglas County Courthouse, to facilitate the bid opening process for construction of the new Douglas County Jail facility. After the bids were opened and recorded, officials noted that a decision will be forthcoming in about two weeks.

After soliciting bids for the construction of the new jail facility, county commissioners held a public bid opening session August 29 with three construction management companies submitting proposals on the project.

With the goal to restructure and rebuild the Douglas County road system, Presiding Commissioner Lance Stillings and commissioners Craig Cunningham and Lawson Curtis, are asking voters for help.  The commissioners have decided to place a one-half of one percent sales tax question on the November ballot for consideration by voters, as the county road system is in need of major improvements.

At present, county funds are limited and only allow Douglas County crews to make minor repairs, improvements which most generally entail patching areas to maintain passable conditions.  Since county monies are limited, Stillings says road crews can only do what is deemed necessary.  Commissioners acknowledge funds are not available to adequately improve the county road system and make structural changes as presently needed.

If the sales tax question should pass, the action will not go into effect until April 1, 2019.  The sales tax is projected to provide approximately $450,000 – $480,000 annually, and once the sales tax option is applied in April 2019, funds will be available for immediate use.

Stillings said some county roads have become a public safety issue as areas are difficult for emergency vehicles to travel.  He noted if the tax is supported by the community, commissioners will create a 10-year strategy for overseeing improvements, as well as a plan to  include a chip and seal application for heavily trafficked roadways, but that will only occur once all other issues are addressed.

The commissioners said monies from the sales tax are earmarked solely for road improvements and maintenance.  The money cannot be used for salaries, new equipment purchases, or any other items.

Initially, Lance said the plan would be to tackle roads in desperate shape and in need of structural attention, such as old Highway 5.  He noted having the extra money would also allow another layer of surface material to be distributed throughout, and drainage issues to be corrected.

The sales tax question, which will appear on the Nov. 6 General Election ballot, will read as follows:

Shall the county of Douglas impose a countywide sales tax at the rate of one-half of one percent (1/2 of 1%) for the purpose of maintenance and improvements to the county roads and bridges, including the purchase of stone, gravel, culverts, fuel, asphalt, concrete and other materials? This tax shall not be used for employee salaries or new equipment.

Currently, Douglas County is one of the few counties in this area that does not have a road tax, but most nearby counties, such as Ozark County, have had one for several years.

The City of Ava has also placed a sales tax question on the Nov. 6 ballot to acquire more revenue.  City officials are asking Ava residents to support a transportation tax with the monies earmarked for improving roads within the city limits.

In addition to the road tax, commissioners were busy this week overseeing the bid opening process for the proposed Douglas County Sheriff’s Office and Jail complex in Ava.   On Wednesday, bid proposals were received from Branco Enterprises of Springfield, Wright Construction Services of St. Peters, Mo., and DeWitt Construction of Springfield, Mo.

All of the submitted proposals will be evaluated by Septagon Construction Management, Inc., of Sedalia, Mo., the firm overseeing the jail construction project.  Officials hope to make an announcement on the bid offerings in approximately two weeks.