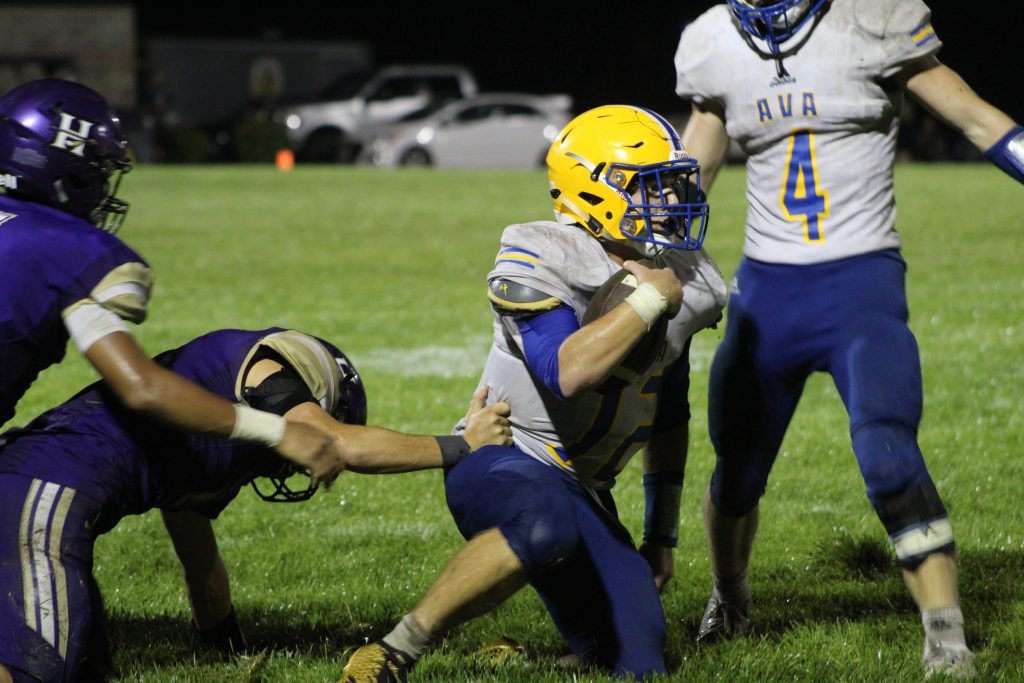 The Bears and their fans were treated to a well played game as Ava cruised to a win in Hallsville Friday night.

Adversity. That is what the Ava Bears football team had to overcome Friday night, against the Hallsville Indians. From a three plus hour bus ride, an hour lightning delay, on the game, and a wet, wet, tall grass field, the Ava Bears beat the odds and brought home the win.

“Take care of the football!” rang out from the sidelines as the coaches remind the players. The first two possessions, on offense, by both teams, proved the importance of those reminders. Both Ava and Hallsville let the ball hit the ground, but both were able to recover their own fumbles. Early on, it appeared it was going to be a defensive game, as both teams showed they were there to play football, and the defenses were there to make a stand.

With Steven Copeland off the injured list, and back on the field, we knew he would make a difference in this ball game, with his lightning quick speed, in the backfield, and his preventive play, at defensive back.

The Hallsville Indians got first possession of the football, but they were no match for Waylon Moon and the line of the Ava Bears, as they are held to four downs and forced to punt.

Caleb Johnson’s pitch, to Josh Bray, started the Bears on their first drive, and showed that this combination is going to work good for the Bears, as Bray worked hard, up the field, getting the yards for a first down.  The Bears showed how wet the field was and fumbled the ball, but were able to recover. Fighting the big lineman, of Hallsville, they were forced to punt. Caleb Johnson, a kid that works about every position, on the field, kicked a stellar punt, putting the Indians back deep, in their own territory.

Mason Husky, a strong runner, for the Indians, and one they really rely on to get the ball down the field, is quickly stopped by Ivect Chittenden, who, Friday night, saw a lot of time, on defense, at nose guard. Chittenden, with his powerful upper body strength, held the Indians’ Mason Husky to fourth down.

Kayden Myers, showing he can run the ball effectively, on this wet field, gets Ava points on the board, late in the first quarter, with a 15 yard run. A successful two-point conversion gives Ava an 8-0 lead over Hallsville, on a 45 yard drive.

Ava’s defense is able to hold off the Indians, in the second quarter, despite the speed of the Indians’, Cooper Crain, breaking a 50 yard run.

Ava is once again able to put some more points, on the board, here, in the second quarter, after a pass from Caleb Johnson to Steven Copeland, gets them deep into Buffalo’s territory. Kayden Myers is able to capitalize, from the 7 yard line and the two-point conversion was good, making it 16-0, in favor of Ava, going into halftime.

Ava starts the second half with an impressive run by Nate Swofford, on the kick off return, taking it all the way down to the 23 yard line. Despite having great field advantage, Hallsville is able to keep Ava out of the end zone, with a penalty flag for holding, and great pursuit on the corners.

Hallsville, with the ball back on offense, isn’t able to make any progress with Copeland and Swofford back to cover the pass, and are forced to punt, once again.

Spencer Skyles, a name we will be hearing a lot, in the next four years, getting some play time in, at full back, gets Ava into position for Caleb Johnson to find the seam, fake the pitch and run the ball in, from 24 yards out, to cap a 64 yard drive. This puts the Bears up to a 24 point lead, after a completed two-point conversion, in the third quarter.

The fourth quarter seemed to prove just how good these Ava Bears are. The defensive stands, being made on the front lines, were showing just how tough these boys really are, facing a huge Hallsville team and forcing them to punt the ball, early in the fourth quarter.

Once again, with Steven Copeland showing his speed, he moves the ball into the red zone, and Caleb Johnson scores from one yard out, behind the impressive block, from Ivect Chittenden . The point-after attempt is good, putting Ava up, 31 to 0, early in the fourth quarter.

Ava’s defense is able to hold Cooper Crain, and his offense, to a no score game and Ava comes home with the first win, of the season. Ava will be playing at home this week, for their first conference game against the Mtn. Grove Panthers. This, “good vs. evil”, game is always a showdown. Ava will be defending their last year’s conference title, Friday night, and you can bet they will be firing on all cylinders.