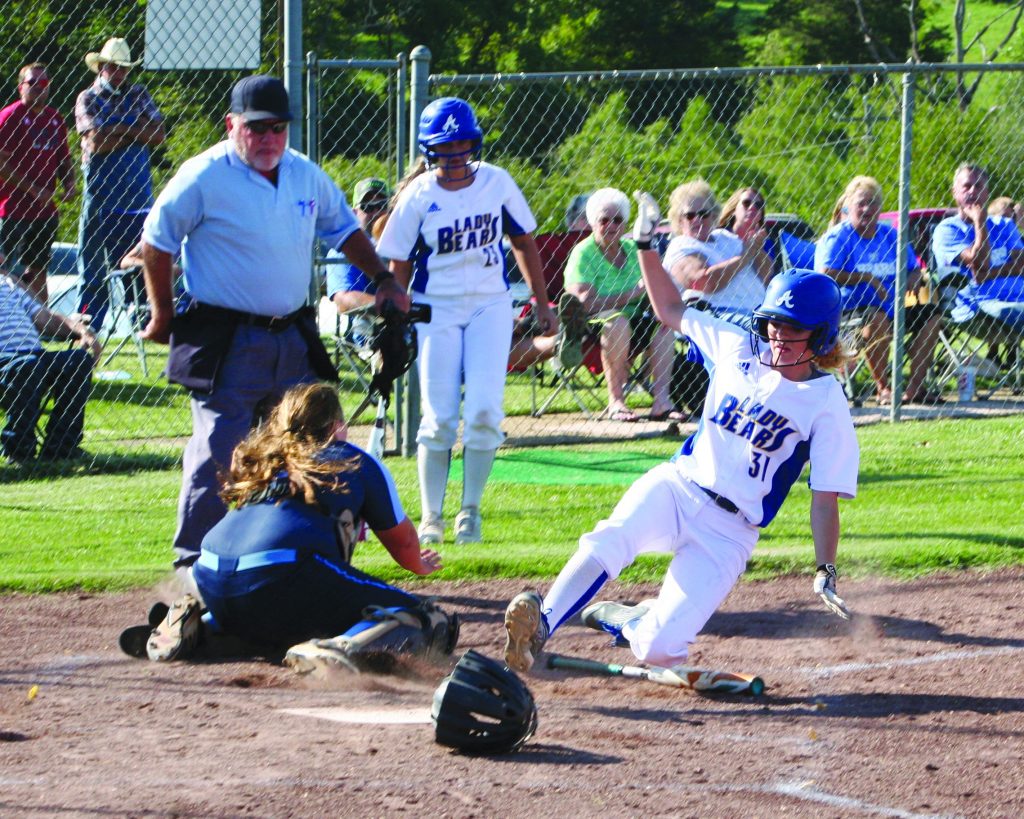 Kiuanna Snow slides in before the tag in the 1st inning Tuesday evening in Ava against the Salem Tigers. Ava would go on to win the game 3-1

It was the perfect evening for a ballgame Tuesday as the Lady Bears took on the Salem Tigers here in Ava. Macey Phillips and the Bears found themselves in trouble often with Salem advancing a runner to 3rd base in every frame but the Bears came up with an answer time and time again to escape unscathed through the first 6 innings with Salem scoring their lone run in the 7th as Ava used some timely two out hitting to score 3 of their own and emerge victorious 3-1.

Phillips, roughed up in her first game in the Reeds Spring tournament, found her footing early on as she registered the first two outs quickly before giving up a hard hit double to center field. The runner, who advanced to 3rd on a wild pitch, was left stranded there as Kiuanna Snow cleanly picked a ground ball and fired to first for the third out.

The Bears immediately went to work as Snow walked on four pitches. After outs by Phillips and Ashton Bewley, Snow stole 2nd and scored on a Reagan Koop single to left field, sliding in as the tag was too late by the catcher.

Ava and Salem traded zeros in the 2nd as Phillips sandwiched a pair of strikeouts around two singles and a ground out, stranding Salem’s baserunners at 2nd and 3rd. Ava would keep the Salem defense busy in the bottom half of the inning but came out empty handed as only Macee Cutbirth managed to reach base safely on a single. 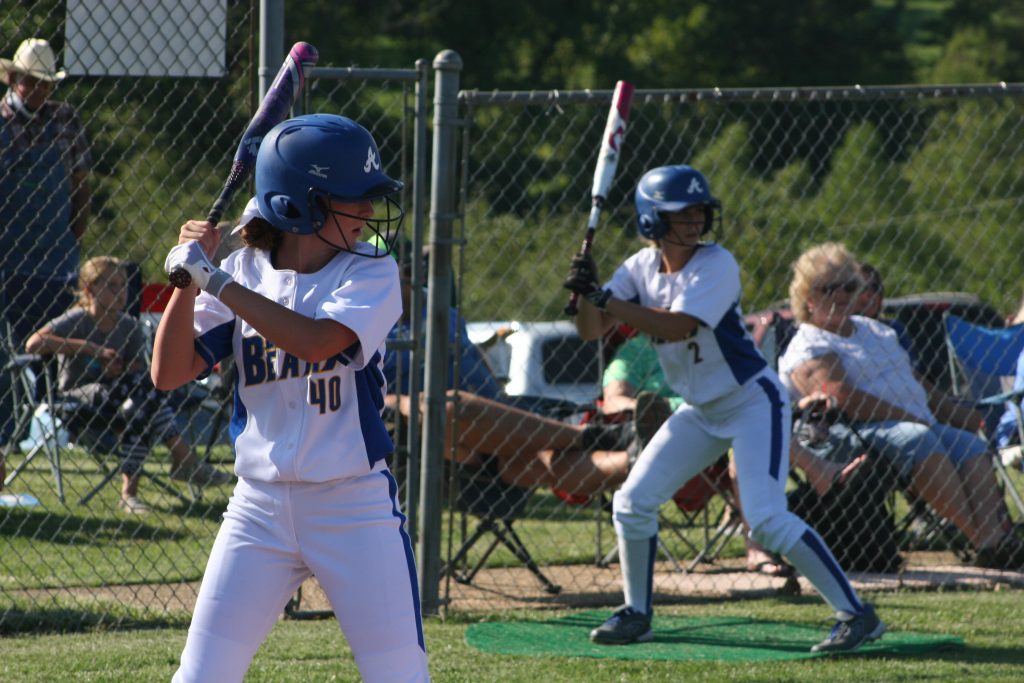 Macey Phillips bat Tuesday evening against the Lady Tigers from Salem. Ashton Bewley waits behind her in the on deck circle. Ava would emerge victorious 3-1.

Ava once again would bend but not break in the 3rd as Phillips finally punched out the leadoff batter, after four straight foul balls with a swinging 3rd strike. A single to the next batter, who then advanced to 3rd after an error and a ground out, left Ava in familiar territory, a runner on 3rd with 2 outs. Phillips stood her ground and the Lady Bear defense held as she induced a ground ball to Snow, playing at shortstop, and was easily thrown out at 1st base, stranding the runner.

Ava would break through with what proved to be the winning runs in the bottom of the 3rd with a very nice 2 out rally. After a pair of outs, by Phillips and Bewley, Ava’s offense went to work. A walk by Koop, a single to center by Miquia Heinlein and a hit by pitch to Jada Gunter loaded the bases for Taylor George. On a 1-0 pitch George hit a ground ball to the Salem 3rd baseman but an error allowed 2 to score pushing Ava’s lead to 3-0. Julia Henry would then ground into a fielder choice as Gunter was out advancing to 3rd to end the inning.

Ava fell into a dangerous pattern the next three innings. Salem would threaten with runners each time finding their way to 3rd base and Ava would answer every time with a big out and leave Salem empty handed.

Salem finally pushed their lone run across in the 7th. After a leadoff fly out followed by a base hit and then a double put runners on 2nd and 3rd with only 1 out. Gracie Heinlein came in to relieve Phillips and secured the final two outs on a pair of ground balls allowing only one of the inherited runners to score and left Ava victorious 3-1.

Sparta would end up outhitting Ava 9-4 and each team left a pair of errors on the scoreboard. Macey would end the evening with a six strikeouts to her credit and allowed only one walk on 106 pitches. The Lady Bears only managed 4 hits, with 2 of them credited to Miquia Heinlein and Koop along with Cutbirth accounting for the remaining 2. Kiaunna Snow worked 2 walks with Koop and Gunter providing one more each. The most damaging number, and one that the Lady Bear team can hang their hat on, is 10, the number of runners Sparta was forced to leave on the basepaths as Ava refused to allow Sparta to break out and enjoy a big inning.