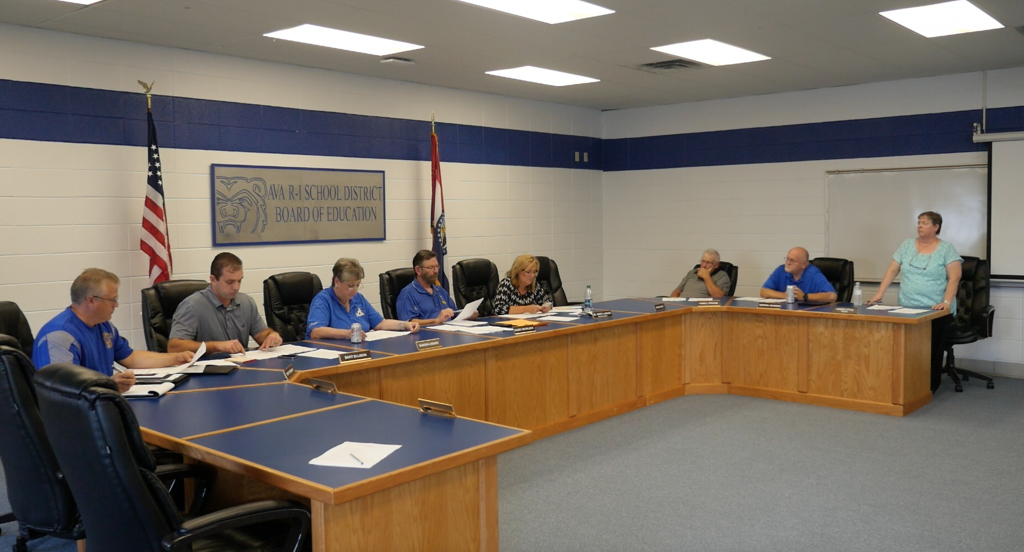 The Ava R-I School Board held a special meeting on Friday, July 15, at 5:30 p.m.   Student transportation was the only topic on the agenda.

The purpose of the meeting was to move forward with the board’s recent decision to simplify the student transportation contract for 2016-17 and re-establish an amicable working relationship with the current group of route owners.

The session was a follow-up to the June meeting wherein Attorney Karen Bates-Crouch was asked to formulate new contract wording and add specific items to the agreement, as directed by the board of education.

The Agreement for Right to Contract for Servicing of Bus Routes defines the route to be serviced, and the date service commences.  It also records the fee the contractor or bus route owner pays for the right to contract the route.   This document allows the contractor or bus route owner to assign, transfer or sell their Right to Contract to another party, with board approval.

The second agreement entitled Contract for Servicing of Bus Route(s) states the contract is for the duration of one year, and may be renewed in perpetuity.  It also defines general provisions of the agreement, such as start / end date, compensation for contractors, base pay rate, mileage reimbursement rate, driver and sub training requirements.  The contract also details the additional obligations of the district school board, contractors, vehicle require-ments, and driver obligations.

Ellison expressed several concerns noting there were no consequences written into the contract for mileage fraud.  He also noted the $1-million insurance requirement does not cover the district.  Bates-Crouch advised there may be a need for an indemnity clause, or a hold harmless agreement.

Board member Lowell Strong also recommended an umbrella policy for the group, which would provide added coverage.

Dr. Nancy Lawler commented the proposed contract does not have a morality clause for the contractors, and it is important for the group to be held to the same standards as staff members.

In response, Bates-Crouch noted the contract can easily reflect staff policy standards, by adding a clause noting guidelines for the current school year also apply to contractors and drivers.  Bates-Crouch advised “this is a morals clause.”

With several details still needing to be defined and concluded, the board gave each route owner or contractor a copy of the proposed documents.

The route owners and members of the board will meet again on Tuesday, July 19, at 9:00 a.m. in the board of education meeting room.  During the session they will discuss pay rates for dirt and paved routes, and options for the consolidation of routes.