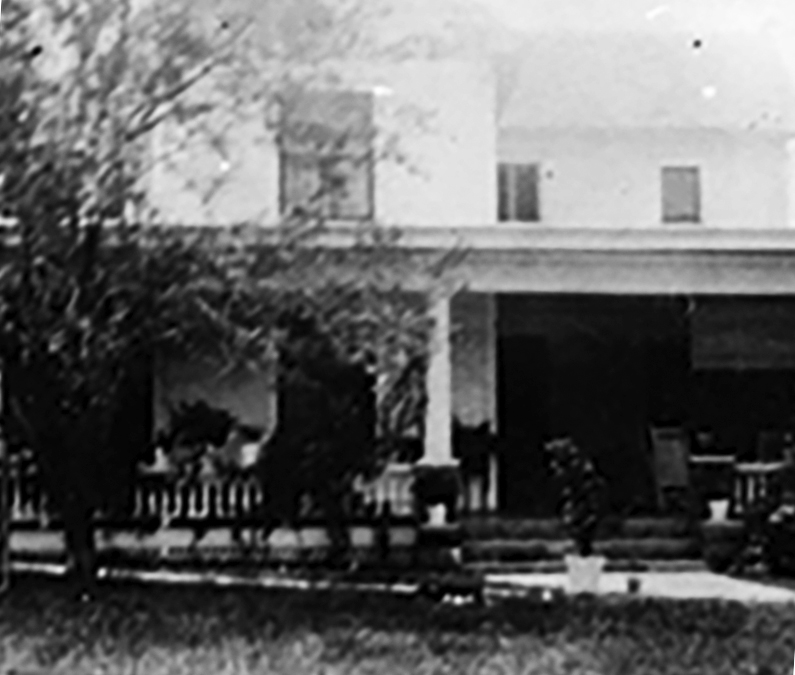 Photo provided by Jay Kavanaugh Whitehall, the home of Sally and Josiah Adams.

Sally Joe Turner was born in 1874, one of nine children of Samuel Edward and Sarah Jane (Lyon) Turner of the Arno, Missouri community, the second county seat of Douglas County.

Samuel’s parents, William & Hannah Turner came to Missouri from Indiana and settled in 1841 at the site of an old Indian village at the junction of Cowskin and Beaver Creeks. Sarah’s parents were Joseph and Sallie (Page) Lyon married in 1860.   Joseph was a miller on Beaver Creek and his mill was later known as Jackson’s Mill.

The Turner home was the showplace of the region and Samuel’s store and post office was next door. Samuel served as postmaster until his death in 1892, then his daughter Sally Joe was appointed to fill out the term.

In 1897 Sally Joe Turner married Josiah Morgan Adams, who, along with his brother, Finis, had established the Bank of Ava. The marriage ceremony took place at the home of the bride’s mother at Arno. After the ceremony they boarded the KCOS train at Mansfield for a honeymoon to New Orleans.  Their two daughters were Elinor and Florence. Early plats of Ava show Adams’ property-holdings in southeastern part of Ava. They built a fine home known as Whitehall. Their home was a center of social life in Ava, hosting many weddings, club meetings and entertainments. J. Morgan Adams died in 1909. His obituary stated his “worth safely estimated at $60,000 and he owned more land than any other man in Douglas County”. Mr. Adams was buried at the Ava city cemetery. In 1920, Sally Joe platted a section in the cemetery titled as the Adams Cemetery. There is a prominent Adams headstone with family graves in the “Adams Circle”.

Sadly, the fine home burned on December 28, 1928 while Sally Joe was in Illinois visiting her daughter Elinor. Florence was in the front part of the house and was made aware of the flames by neighbors. It was believed to have been caused by an oil stove in a bedroom. A strong west wind drove the flames rapidly. According to an account in the Douglas County Herald, “J.E. Reeves, city water superintendent, was on scene with chemical equipment. The chemicals were quickly spent and a hose connected to city water. For a time it was hoped the fire could be contained, but with the wind, attention was given to nearby residences, as fires were reported at residences and buildings several blocks away. Few articles were saved from the home.” Sally Joe Adams left Ava after the close of the bank and moved to Jefferson City to live with Elinor and Jay. She died there in 1961 and is buried in the Adams family plot in Ava Cemetery.

Some of the items saved from the fire have been donated to the Douglas County Museum. Jay Kavanaugh, Elinor’s son (Sally Joe’s grandson) donated a guest book from Whitehall that listed guests attending various social functions at the home and a rocking chair that he says he can remember being rocked in that chair by his grandmother. Sally Joe’s niece was Florence Garrison, daughter of Sally’s sister Lois Edna (Turner) and Moses Silvey.   Florence was a well-known and highly regarded English teacher at Ava High School. She had in her household a mirror from Whitehall that was donated to the museum from the Garrison estate.

Information for this article has been taken from family papers donated by Jay Kavanaugh and articles in the Summer 2009 issue of the Historical Society Journal. The Journals are printed twice a year by the Society.

The Douglas County Museum is owned and operated by the Douglas County Historical and Genealogical Society, a 501 (c) 3 non-profit charitable organization. It is of the people and for the people of Douglas County, Missouri. The museum is located at 401 East Washington Avenue, one and one/half blocks east of the Public Square on Missouri Highway 14. We are open every Saturday from 10 a.m. to 2 p.m. and tours by special arrangement. Monthly meetings are held at the museum the third Monday of each month at 6:30 p.m. The public is invited to attend.     Join us on Facebook for the latest historical picture postings.