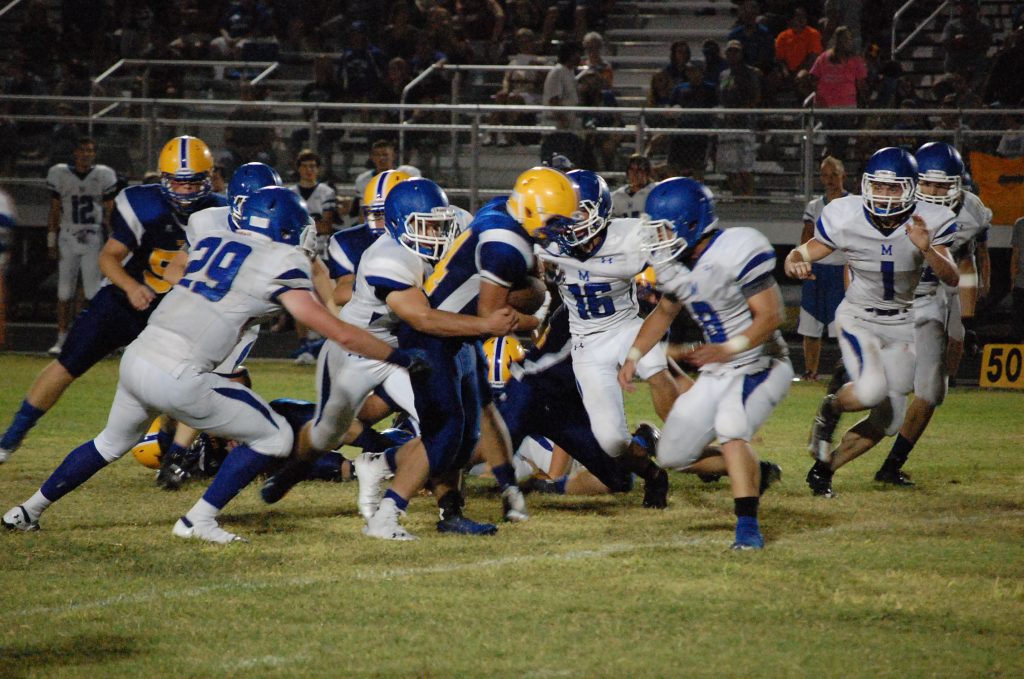 The Ava Bears had over 500 yards total offense in the football season opener here last Friday night. Five different players scored a total of eight touchdowns as the Bears took a 58-22 non-conference win from the Marshfield Bluejays.
Ava had 481 yards rushing, led by senior Kane Thompson who had 147 yards on just seven carries. Quarterback Cody Huff was 2-for-2 passing for 73 yards and one touchdown, and ran for three touchdowns and a 2-point conversion.
This week the Bears will make a long road trip for a first-ever meeting with El Dorado Springs. Ava coach Dan Swofford says the Bulldogs have a huge front line and a small, but fast, runningback who is a constant scoring threat.
The Bulldogs lost to Stockton 28-14 last Friday night.
At Ava last Friday night, Marshfield received the opening kickoff but turned the ball over to the Bears on downs on an incomplete pass on 4th and 12.
An exchange of fumbles gave the Bears the ball on the Marshfield 43-yard line. On the next play, Thompson ran 43 yards for the touchdown. Gerald Smith ran for the 2-point conversion and Ava had an 8-0 lead at 9:12 in the first quarter.
Another Marshfield fumble set up Ava’s second score of the evening. After the Bluejays fumbled to Ava at the Bears’ 34-yard line, Smith ran to the 10 for a first-and-goal. Huff would score from one yard out. Colton Akers came up short on 2-point attempt but a flag on Marshfield gave Ava another chance and Smith scored the conversion to put Ava up 16-0 with 6:01 left in the first quarter.
Marshfield would get on the board before the first quarter ended, however.
Following a 43-yard pass play from quarterback Jordan Dean to Wyatt Mitchell for a 1st-and-10 at the Ava 12, Dean ran the ball in from the 12 with 3:48 left. The 2-point conversion attempt failed and the score stood 16-6 after one quarter of play.
The two teams exchanged punts early in the second quarter and the Bears were backed up deep in their own territory before picking up a first down at the Ava 34.
That situation changed quickly, however, when Huff connected with Colton Akers for a 66-yard touchdown pass play. Huff then pitched to Akers on the option for the 2-point conversion, putting the Bears up 24-6 at 5:51 in the second quarter, and Ava’s lead at the half would remain 24-6.
Thompson scored on a 27-yard run at 6:45 in the third period and Huff ran for the conversion to put the Bears up 32-6.
The Bluejays wasted no time in  reducing the lead, however, as Dean connected with Aaron Livingston for a 64-yard touchdown. Dean added the conversion to make it 32-14 at the 6:27 mark in the third quarter. 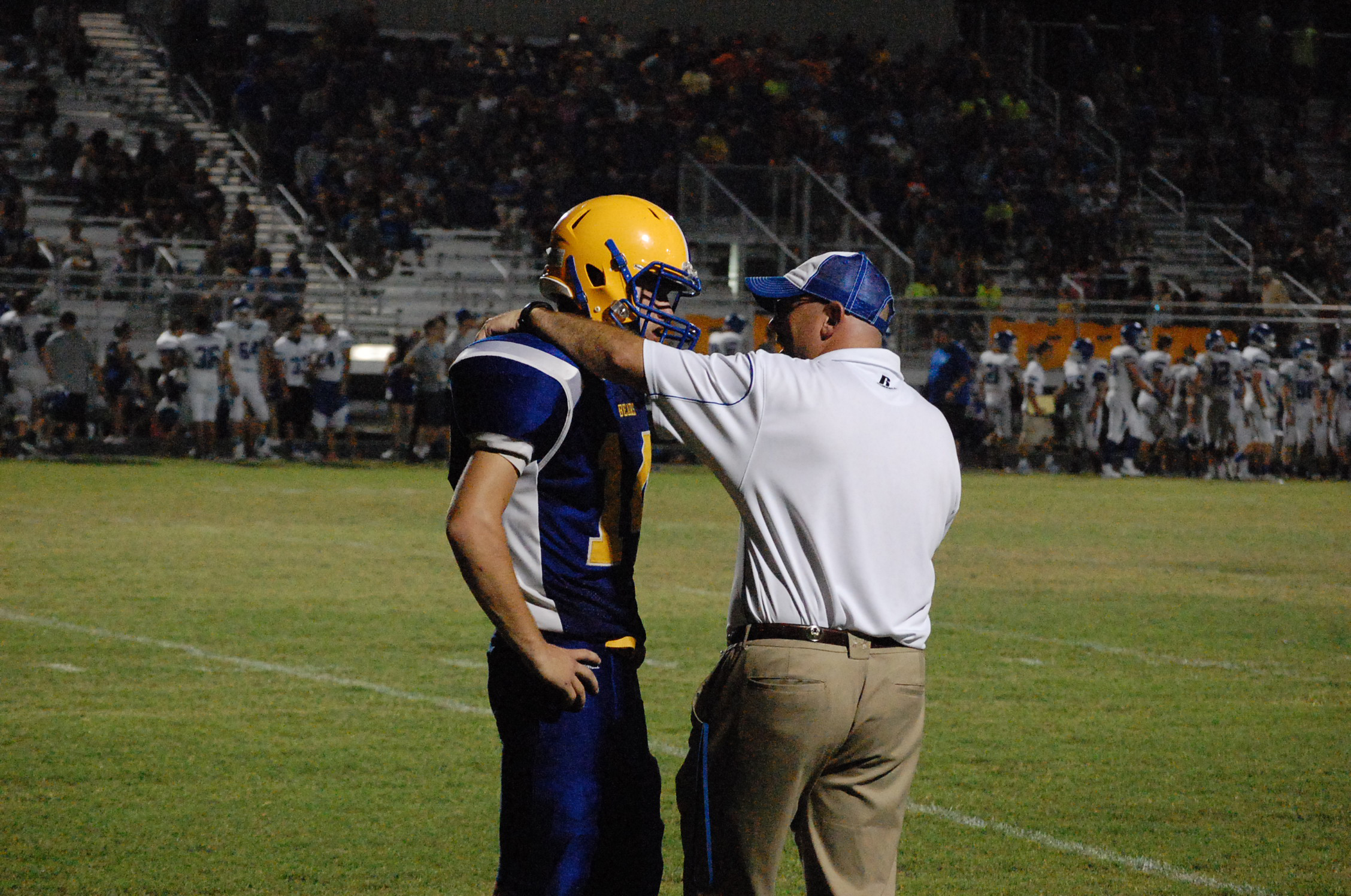 After picking up one first down, the Bears were forced to punt, and junior Caleb McFarlin nailed a beauty, backing the Bluejays up to their own 16-yard line. Ava’s defense held the Jays, and the Bears took over at the 18 with 3:15 left in the quarter.
Smith scored for Ava on a 16-yard run and sophomore Chase Dodson kicked the extra point to make it 39-14.
The fourth quarter began with Marshfield facing a 4th & 10 at the Bluejays’ 40. A Dean pass was tipped by an Ava defender and intercepted by Akers to give the Bears the ball at the Marshfield 43. Huff then scored on a 29-yard run with 9:40 left in the game. Dodson’s kick was no good and the score stood at 45-14.
Huff would score again on a 4-yard run following a long run by Thompson that gave the Bears a 1st-and-goal at the 9-yard line. Dodson’s kick was no good and Ava’s lead was 52-14 at 6:55 in the fourth.
Marshfield had the ball at midfield when Dean completed a pass to Mitchell for a 46-yard gain. Dean would then score on a 1-yard run at 3:04 and passed for the 2-point conversion, reducing Ava’s lead to 30 points, 52-22, with 3:04 left on the clock.
Ava’s junior varsity entered the game on the next series with McFarlin at quarterback.
The junior read the defense well on the option and shot through the line and was off for a 70-yard touchdown run to set the final score at 58-22.
Defensively, Ava junior Nate Bray had 12 tackles, including two for a loss, and a forced fumble.
Seniors Tristan Haltom and John Luebbering each had eight tackles with two for loss yardage, and Akers had the one interception and one quarterback sack.
After the trip to El Dorado Springs this Friday, the Bears will return home on Sept. 5 to open South Central Association conference play with the Mtn. Grove Panthers.