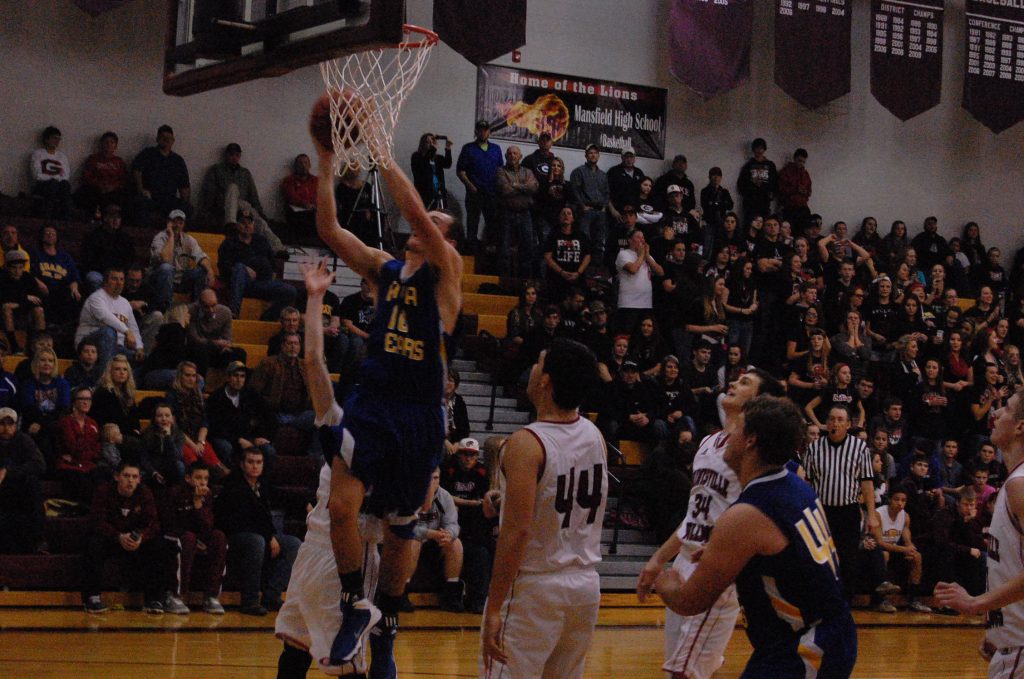 Ben Loge drives the lane to get an easy shot against Gainesville in the championship game of the Mansfield Tournament last Saturday night. Gainesville won the game, 52-41. 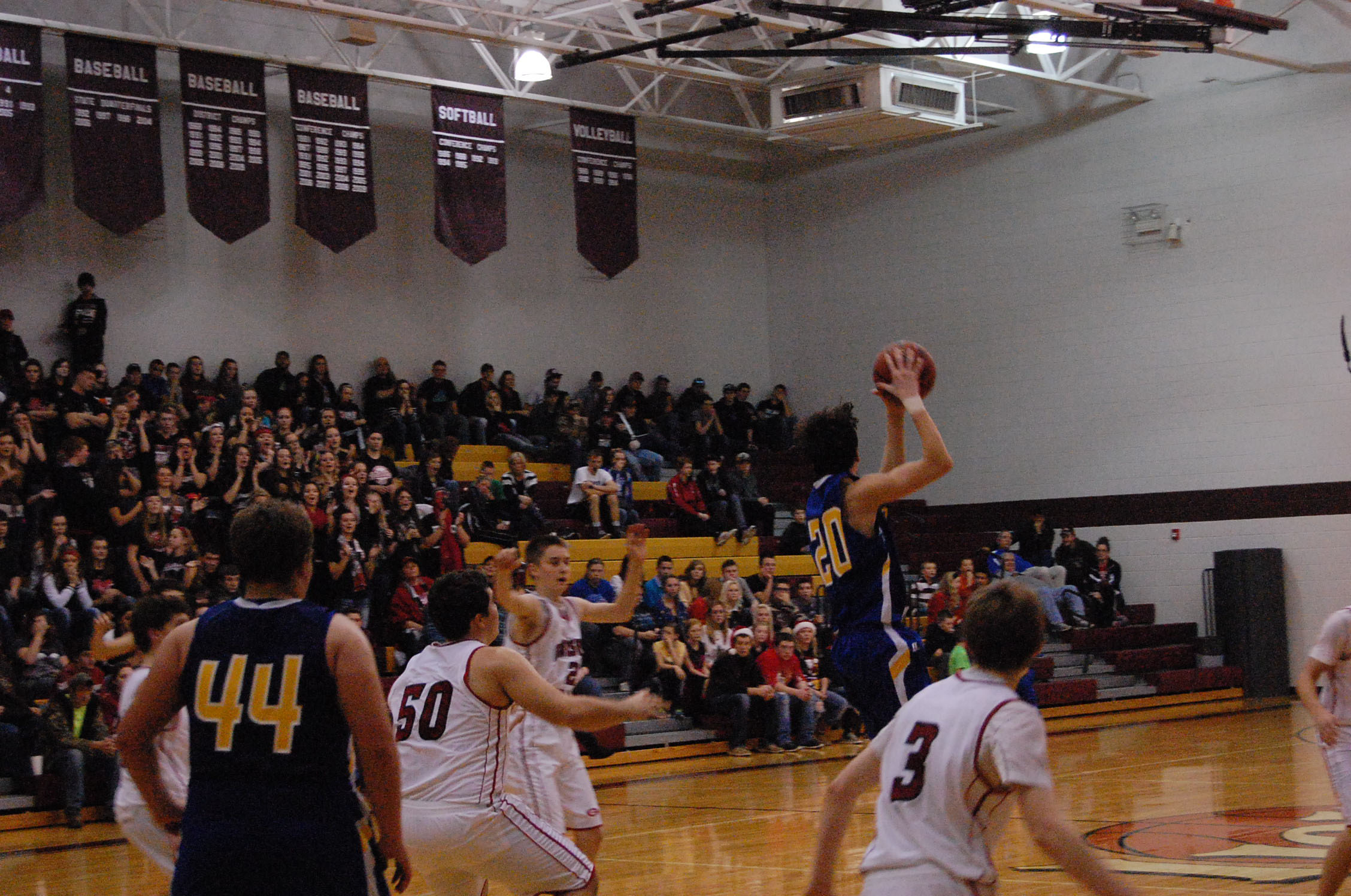 The Ava Bears kept their basketball shoes hot last week, playing four games Tuesday through Saturday. Unfortunately, the Ava boys won only one game, but did take second place in the Mansfield Tournament.
After losing to Hartville at home on Tuesday night, the Bears played the semifinals game of the Mansfield Tournament on Wednesday, squeaking by the Mansfield Lions, 44-43, to advance to the finals.
On Friday night the Bears traveled to Reeds Spring where they lost to the Wolves, 57-44, in non-conference action.
Then on Saturday night, the Bears returned to Mansfield to finish the tournament that was postponed two weeks earlier because of snow.
On Saturday, the Ava boys lost to Gainesville, 52-41, to take the tournament’s second place plaque.
In the win over Mansfield on Wednesday, the Bears were led in scoring by Ben Loge with 13 points. Cooper Emerich and Brandon Guengerich were also in double digits with 10 points each. 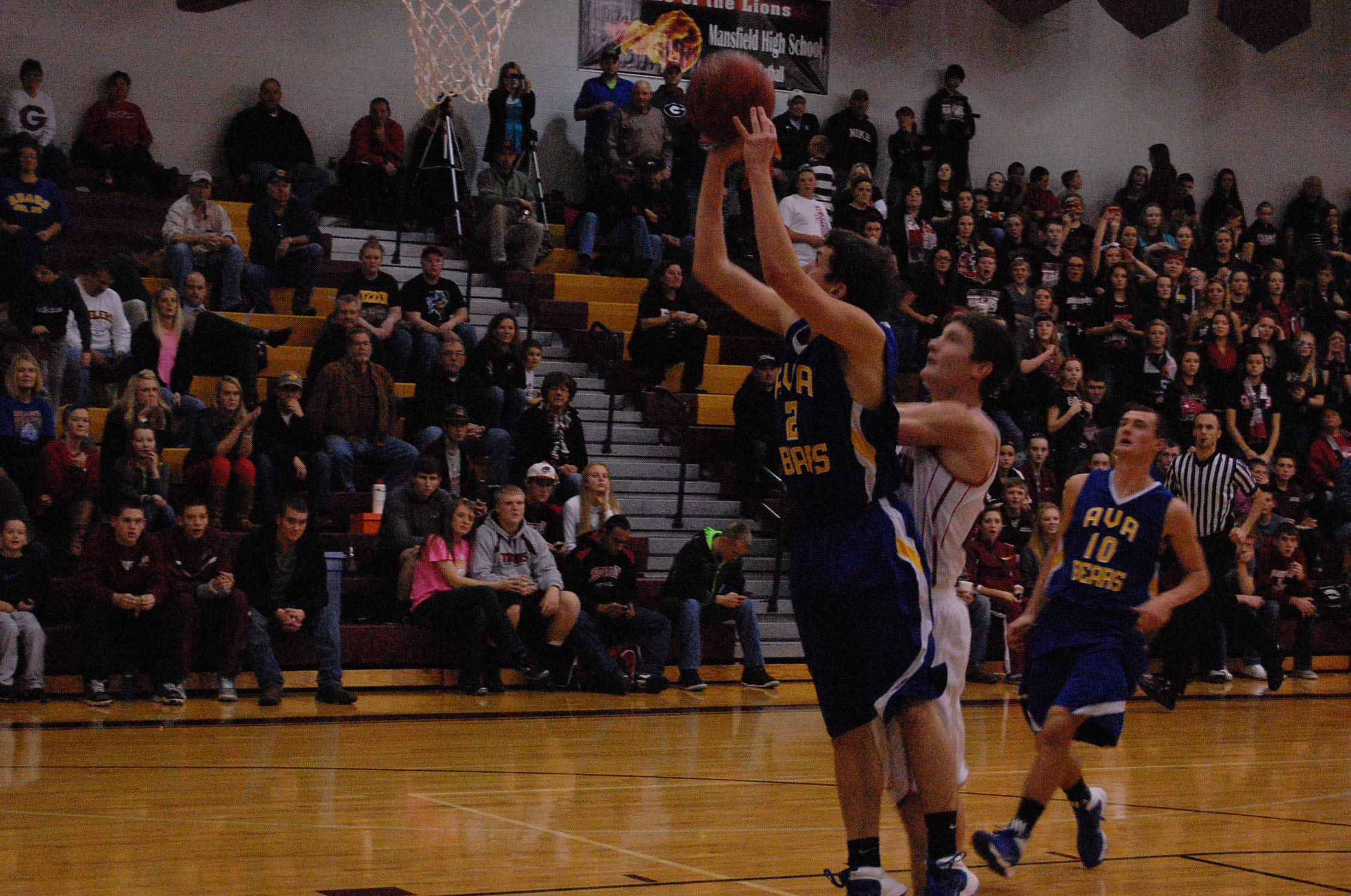 Seth Dobbs steps into the lane for an easy shot against Gainesville in the championship game of the Mansfield Tournament last Saturday night.

Others scoring for Ava were Tristan Haltom 4, Seth Dobbs 4, and Anthony Rosas 3.
Mansfield led the Bears 27-26 at the half.
Jacob Caruso had 18 points for the Lions.
At Reeds Spring on Friday night, Emerich, Loge and Guengerich each had 11 points. Dobbs followed with 7, Haltom 2 and Shannon Porter 2.
The Wolves led Ava 27-15 at halftime.
Ava JV lost to Reeds Spring 43-31.
In the tournament championship game on Saturday night, Loge again took scoring honors for Ava with 11 points. Guengerich and Haltom had 8 apiece, Dobbs 6, Emerich 5, Rosas 2 and Colton Akers 1.
Thomas Ritter had 16 to lead the Bulldogs which led 23-18 at intermission.
On Thursday, Dec. 26, the Bears will play West Plains in the opening round of the Springfield Blue & Gold Tournament in a game beginning at 5 p.m. at the JQH Arena on the campus of Missouri State University.
Win or lose, Ava’s next game will be at 8 p.m. on Friday. Winners will play at the JQH and losers will play at Hammons Student Center.