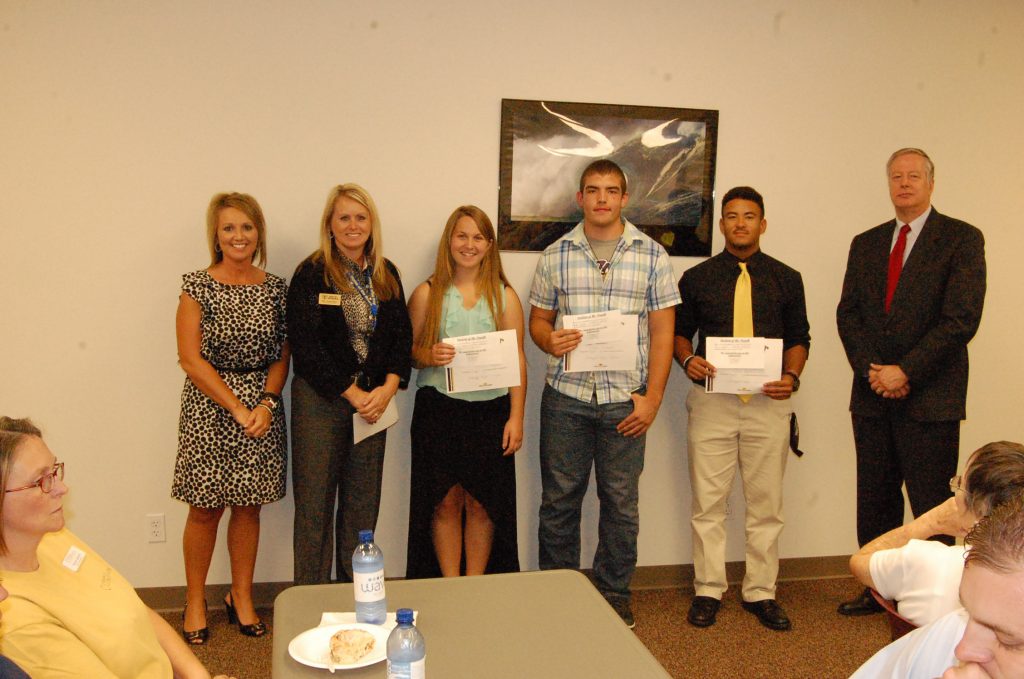 With schools back in session, Students of the Month presentations were once again a part of the monthly Chamber of Commerce luncheon program.
Students of the Month for September at Ava High School are Austin Giorgianni and Elizabeth Ferguson.
Student of the Month at Ava Victory Academy is Cody Ayers.
Austin Giorgianni is the son of Rick and Amy Balassone.
He is involved in Future Business Leaders of America, Spanish Club, Pep Club, Fellowship of Christian Athletes, Chamber Choir, Drama Club, Speech & Debate, Link Crew, football, track, and A+.
He is also involved in community service projects, such as assisting with the park behind the MOCH Wellness Center and volunteering at the Foxtrotters, Food Harvest, and Festival of Sharing at Sedalia.
After high school, Austin plans on attending Central Methodist University to pursue two degrees – one in theology and the other in coaching and physical education.
Austin is a certified layspeaker in the Methodist Church and is leading the youth this year.
Austin was selected as one of the Academic Students of the Month because he always strives to do his best both in school and outside of school. Austin is a very caring and compassionate. He is young man who has strong ethical values and goes out of his way to help other students.
Elizabeth Ferguson is the daughter of Robert and Michelle Ferguson.
Her school involvement includes Anchor Club serving as president this year, National Honor Society, Future Business Leaders of America, Student Council, Jazz Band, Pep Club, and band, serving as drum major.
Elizabeth tutors 7th and 8th grade students in reading rhythms and learning how to play various instruments.
After high school, Elizabeth plans on attending a four year university (hopefully, University of Michigan) and majoring in mathematics and minoring in music. She is also considering law school.
Elizabeth was selected as one of the Academic Students of the Month because she is an outstanding student who volunteers as much as she can while still maintaining good grades and holding down a job.
Principal Teresa Nash commented, “It has been very interesting to watch Elizabeth and the leadership skills she has developed during her time at AHS.”
Ava Victory Academy’s Student of the Month for September is Coby Ayers. Coby has attended the Academy for three years and is a senior this year. He has played Crusader basketball serving as team captain last year. He is a member of the community’s new Go Blue Child Abuse Awareness Committee.
Coby’s teachers picked him for Student of the Month because of his attentiveness in class, diligence in school work, and positive attitude. Coby has a 3.7 GPA so far this year. After graduating, Coby plans to attend OTC. Then, he hopes to attend the Missouri Highway Patrol Academy.
Coby is the son of Ginger Ayers, and he resides with Rod and Deana Scoville.