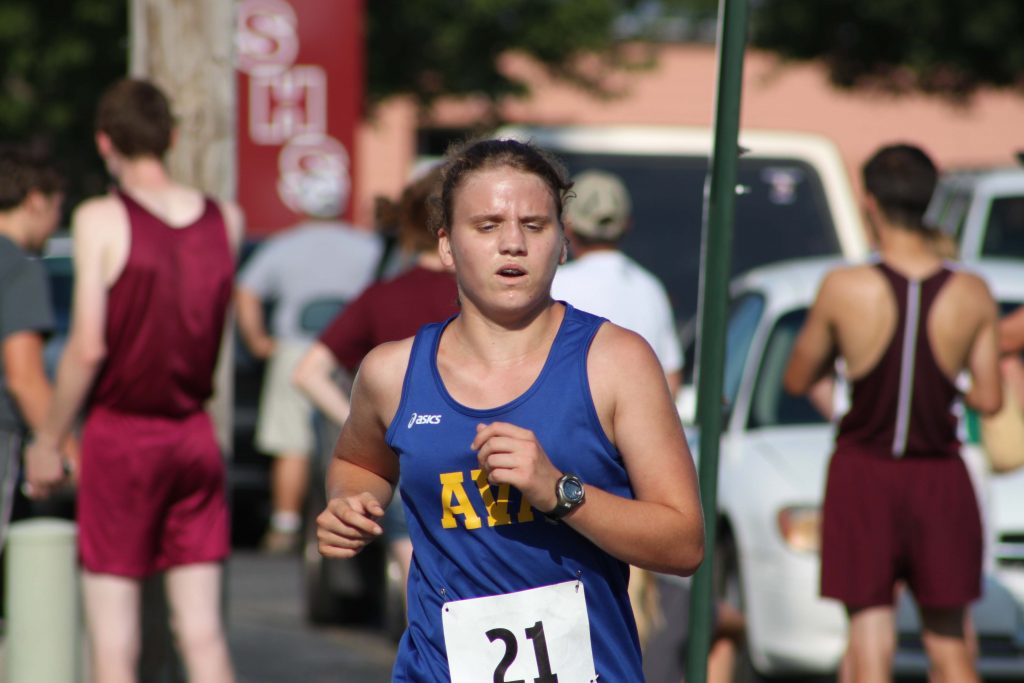 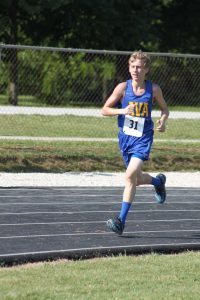 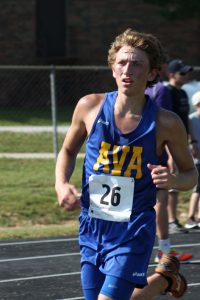 On Saturday, Aug. 31, under a blistering sun, the Ava cross country team broke in their racing shoes for the first meet of the season at the Strafford Invitational.
A total of 116 boys from 15 schools across southwest Missouri competed in the varsity race.
Sophomore Caleb Stillings led the Bears with a new personal record of 17:39 on the 3.1 mile course. Senior Jordan Dimirsky followed closely with an 18:08.
Caleb  finished 11th overall and Jordan was 16th. These two young men are the only returning lettermen from last year’s all-state team that finished fourth at the state meet in Jefferson City last fall.
Both runners improved their times from the same course last year.
While the course was the same, last year temperatures were in the low 60’s with drizzle and enough mud at the start that the course had to be shortened by 100 meters.  This year, no mud, and in the upper 80’s by race time, with heat indexes next to unbearable.
Still, Stillings improved his time by 1 minute 19 seconds over last year and Dimirsky bettered his time by 33 seconds.
Freshmen Jacob Luebbering who has been on the junior high cross country team the last two years, had  a drop of 1 minute 40 seconds which gave him a new PR in the 5k from this summer.  Jacob finished 36th overall with a time of 19:23.
Sophomore Sage Clunn who ran on the junior varsity team last year, had a dramatic improvement with a PR of 3 minutes and 3 seconds over his best 2012 5k time.  Sage finished in 20:33 and in 59th place.
Sophomore Hayden Schuster, another junior varsity runner from last year, placed 63rd with a time of 20:48.
Senior John Vineyard improved his time from last year by 1 minute and 27 seconds finishing in 86th with a time of 22:35.
The Ava varsity team finished 5th out of 15 teams.  Strafford took first, Springfield Catholic 2nd, Plato 3rd, Liberty 4th, Ava 5th only 7 points behind Liberty.  Rogersville 6th, El Dorado Springs 7th, Marshfield 8th, Fair Play 9th, Hermitage 10th, Clever 11th, Spokane 12th, Fair Grove 13th, Alton 14th, and Wheaton 15th.
Sophomores Trevor Randolph and Brett Mitchell competed in the junior varsity boys race.  Trevor also a member of the JV team last year, finished the course in 23:05 and Brett who is new to the team this year, ran the 5k in 23:52, an improvement from this summer by 35 seconds.
In the girls’ race, the varsity and JV were run simultaneously because of the heat.  Unfortunately a debacle occurred at the finish line, (the meet director’s exact words) when the official holding the tags of the completed runners was knocked down by an exuberant finisher and all tags went flying like goose down.  The only times that were saved and recorded accurately were the first 38 girls out of a field of about 130.
Ava sophomore Kayla Cooper was one of those with an accurate time, finishing in the 35th spot and earning a medal.
Kayla led the Lady Bears with a time of 24:05. Sophomore Bailey Ray was close behind with a time of 24:15. Sophomore JimiLynn Raybould had a time of 26:10 with Megan Cooper right behind her and running a time of 26:15.
Julianna Baker finished in 29:54 and Mallory Allen had a time of 31:24.  All of these girls are brand new to cross country this year.   However, all of them have been working this summer to learn the sport and have attended the summer training sessions on a regular basis.
Each of these girls had significant personal bests from the two 5k’s the team attended this summer.  Kayla, 2 minutes 5 seconds faster, Bailey, 2 minutes 2 seconds faster, Jimi, a whopping 7  minutes 11 seconds faster, Megan 1 minute 3 seconds faster, Julianna, 1 minute 50 seconds faster, and Mallory also with a huge improvement of 5 minutes 22 seconds.
Coach Liz Kyger gives the reminder that the season has just begun, with only three weeks of official training under their belts.
Coach Kyger said, “I am so excited about this year’s group of athletes.  They really excelled with the conditions and the short training period we have had so far.
“Last year at this time, we had been practicing for four weeks and in this stage of the season, one week makes a big difference.”
The cross country team’s next meet will be at Bolivar on Saturday, Sept. 7, in the morning, on the campus of Southwest Baptist University.
The team invites the community to meet them and come race on the first competition at the new track facilities at the Silvey Stampede this Friday night from 4–6 p.m.  All proceeds from the Silvey Stampede will benefit the cross country team, which is trying to earn money to buy additional Garmin GPS watches and heart rate monitors to train with.
You can sign up to run the new track at the stadium on Friday, if you have not pre-registered.