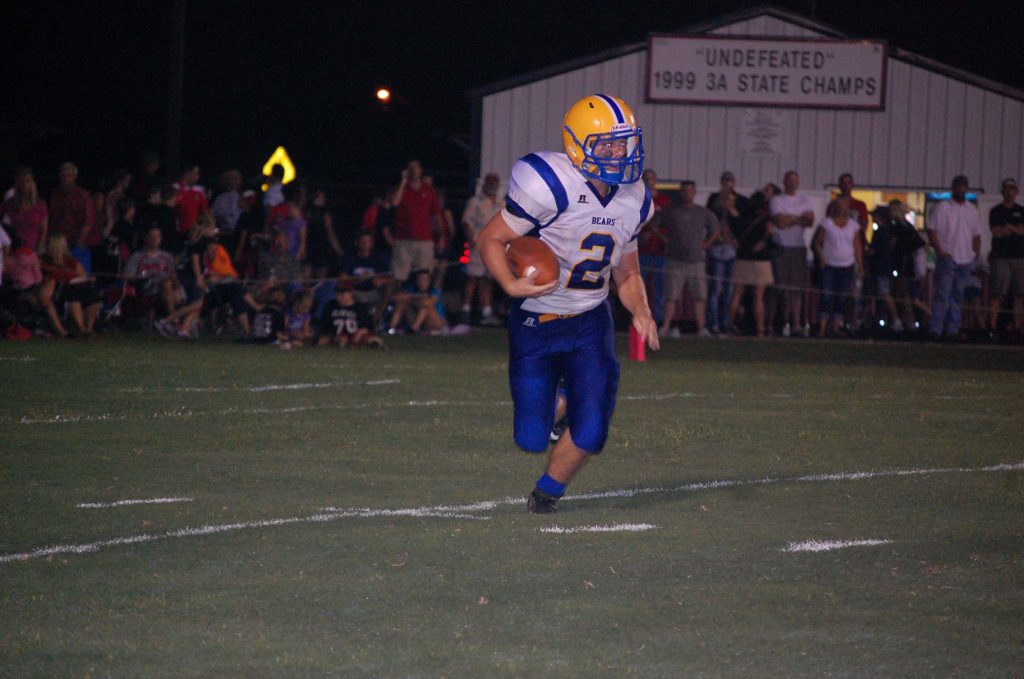 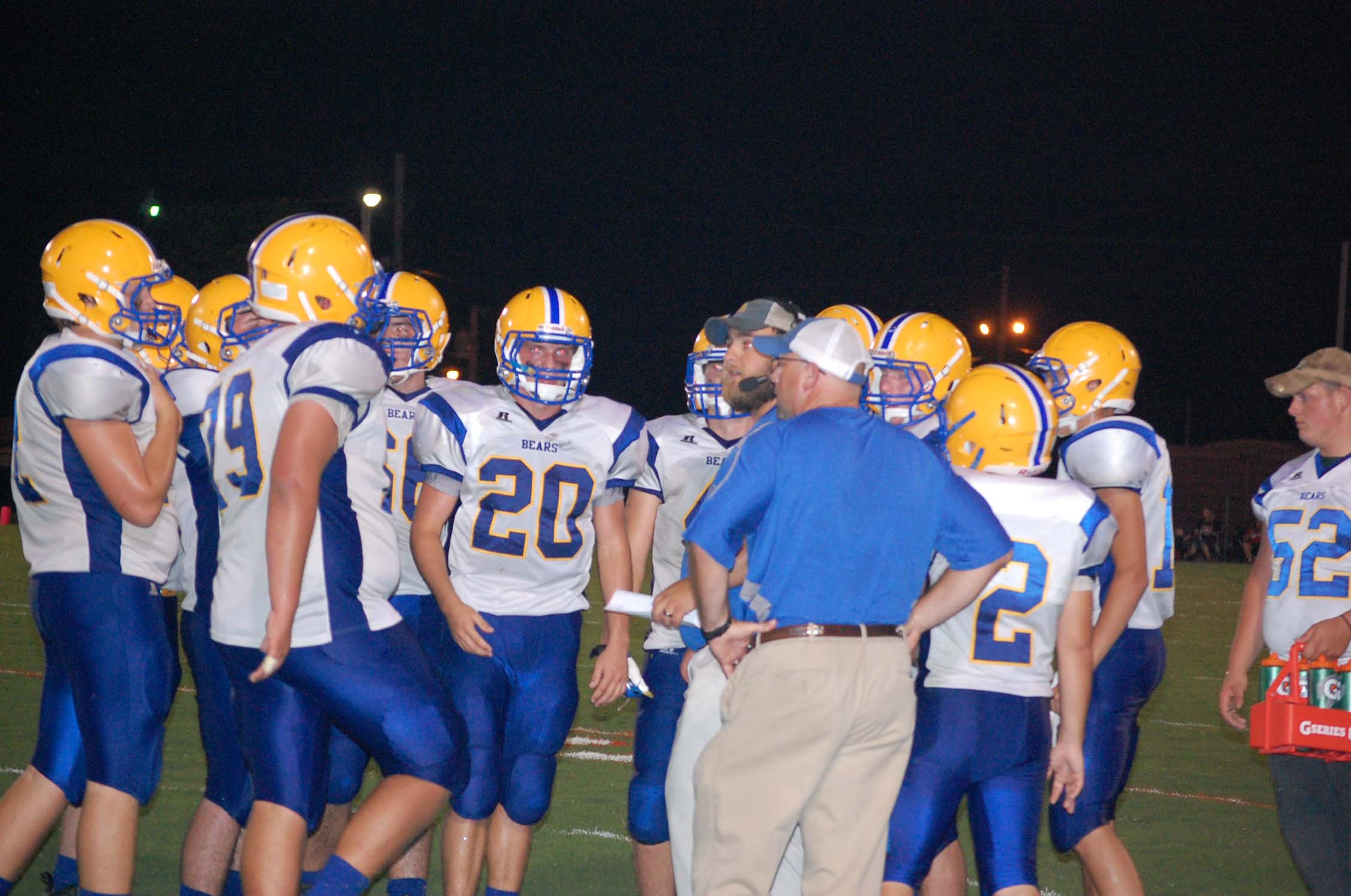 Ava’s head coach Dan Swofford and offensive coordinator Casey Merrifield talk things over on the sideline with the Bears during a water break Friday night. The start of the game was backed off till 7:30 because of the heat, but it was still 90 degrees when the game ended just before 10 p.m.

A strong running game makes the pass more effective, and the Ava Bears used that to their advantage last Friday night at Aurora. Both Ava touchdowns came on pass plays.

The Bears, plagued by penalties and turnovers in the first game of the season, lost to the Houn Dawgs 19-12. However, the Bears were able to move the ball, as evidenced by the 275 total offensive yards.

The Bears spotted Aurora 12 points in the first half and trailed 12-0 at halftime.

The Bears got on the board at 2:16 in the third period on a 35-yard pass play from quarterback Cody Huff to Colton Akers.

Aurora took a 19-6 lead with 2:01 left, but exactly 1 minute later in game time the Bears scored again on a 17-yard pass play from Huff to Chase Willis with 1:01 left in the game.

Willis carried 16 times for 74 yards and caught three passes for 36 yards, including one touchdown.

Colton Akers also had a strong running game, but scored a touchdown on a 35-yard pass completion in the third quarter. 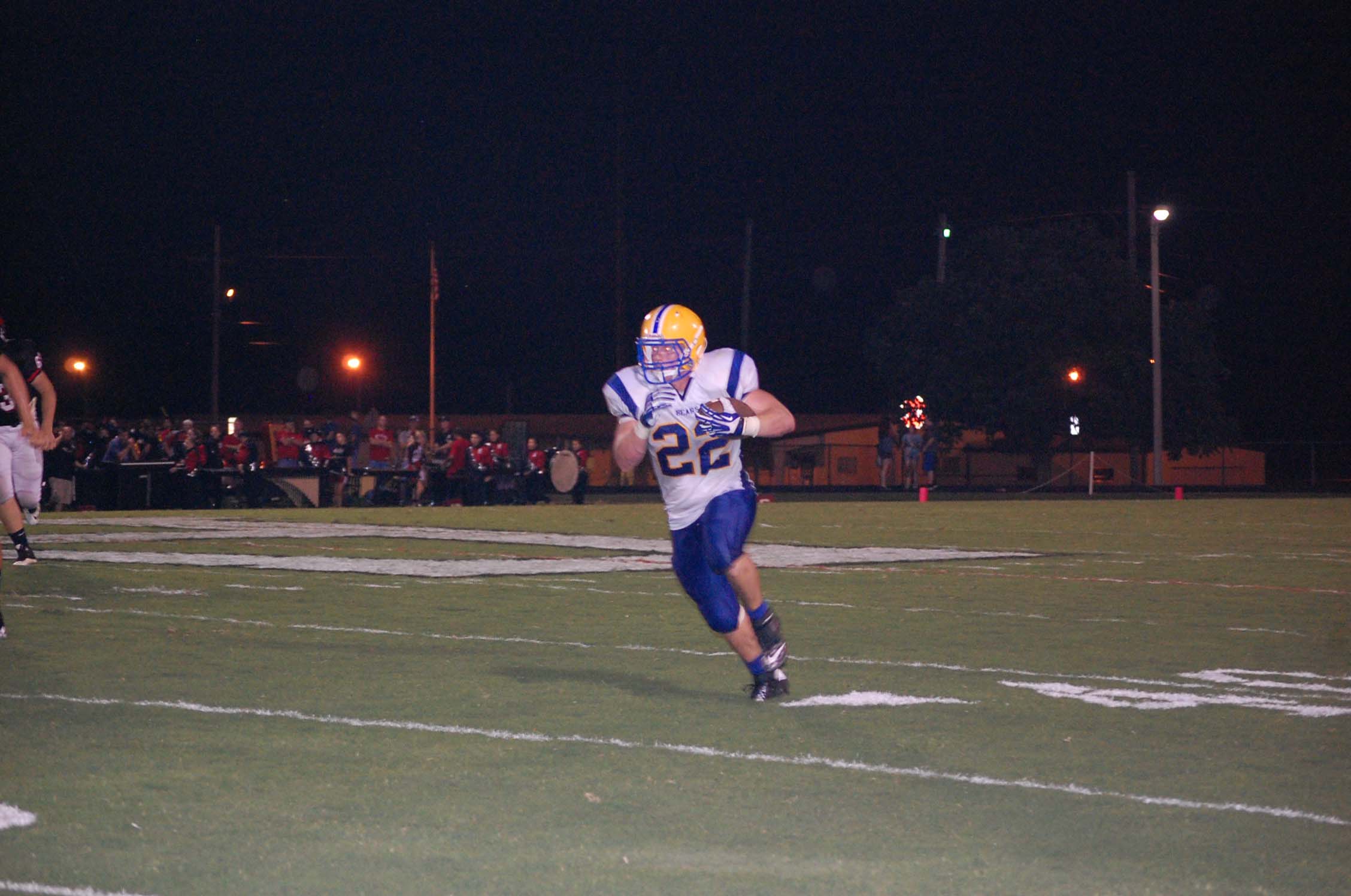 William Blankenship put the Houn Dawgs up 12-0 on a 10-yard run with 11 seconds left in the first half. Aurora went for the 2-point conversion but the pass fell incomplete.

Aurora attempted a 20-yard field goal at 8:41 in the third quarter. The kick failed and Ava took the ball at the 20-yard line and went 80 yards to score at 2:16 in the third period. That score developed when Huff connected with Akers coming across the middle of the field, and Akers completed the 35-yard scoring play by outrunning the Aurora defense.

Ava fumbled the ball away three times in less than six minutes to set up Aurora’s third score of the night that came on a 20-yard pass play from Fronabarger to Skylar Cahill. Fronabarger kicked the extra point to make the score 19-6 with 2:01 left in the game.

Ava’s final drive of the night and second scoring drive would begin at midfield and was completed by the 17-yard touchdown pass from Huff to Willis.

Huff’s only interception was as good as a punt, coming on a 4th-and-12 situation in the fourth quarter. 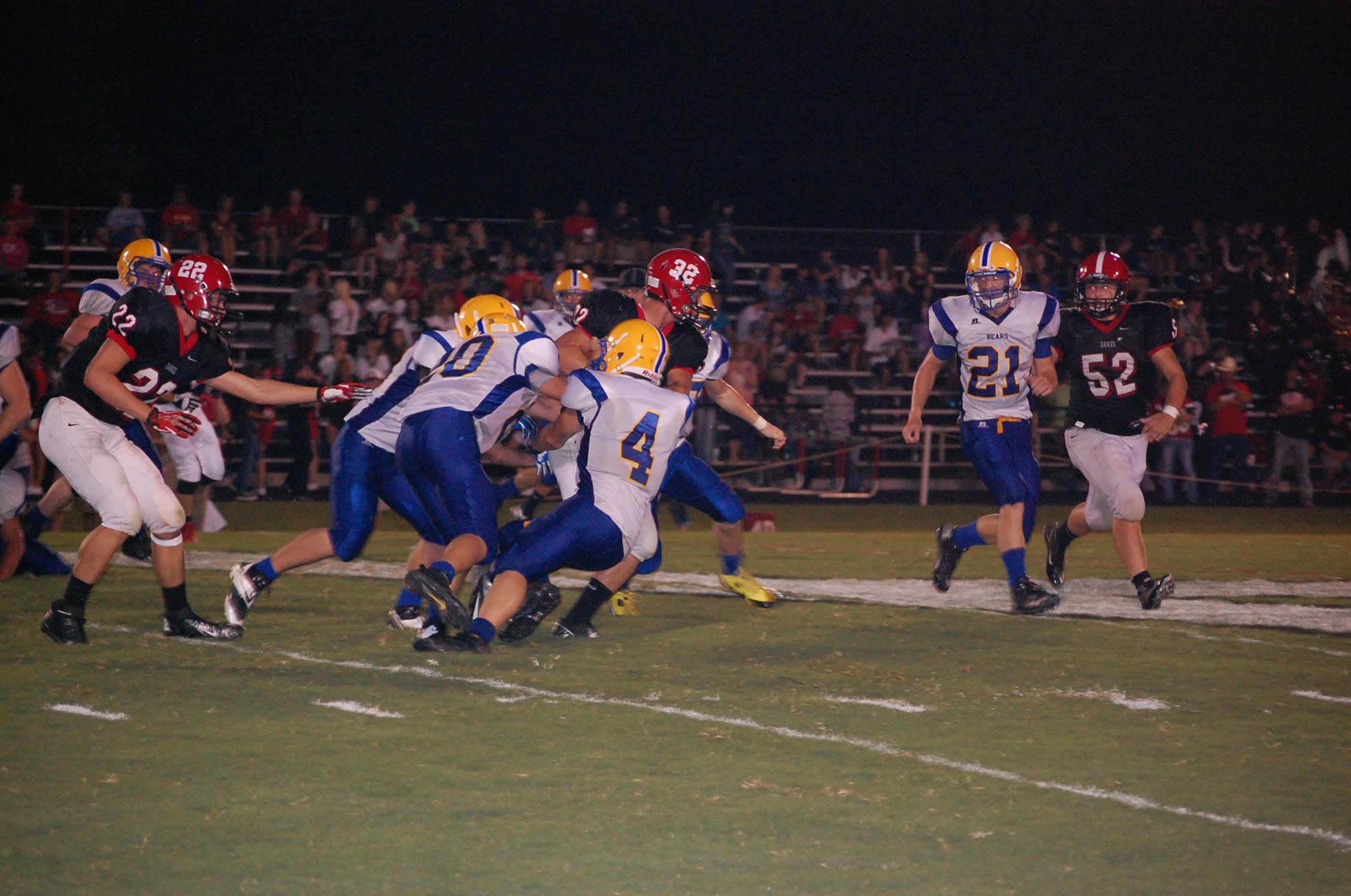 The Bears will be at home this Friday night, hosting the Rogersville Wildcats.

Coach Dan Swofford says the Wildcats are a better team than the 38-0 loss handed to them by Mtn. Grove last Friday night.

“Rogersville is young offensively with only four returning starters,” Coach Swofford said. Their strength is their defense.

Everyone is encouraged to come out Friday night for the inauguration of the renovated Silvey Field.

Activities will begin at 4 o’clock as the Ava cross country team hosts the Silvey Stampede, race competition that allows fans to be the first to run the new all-weather track.

The competition will include events for all ages, including a special business challenge that will allow the winning business to receive hours of volunteer labor from the cross country team members.

The Bears trailed 14-6 at halftime.

Ava’s first score came in the first half on a run by Caleb McFarlin. The Bears’ second score of the game came in the fourth quarter on an exciting 80-yard run by Nate Bray.

The JV will make the long road trip to Salem Monday night.