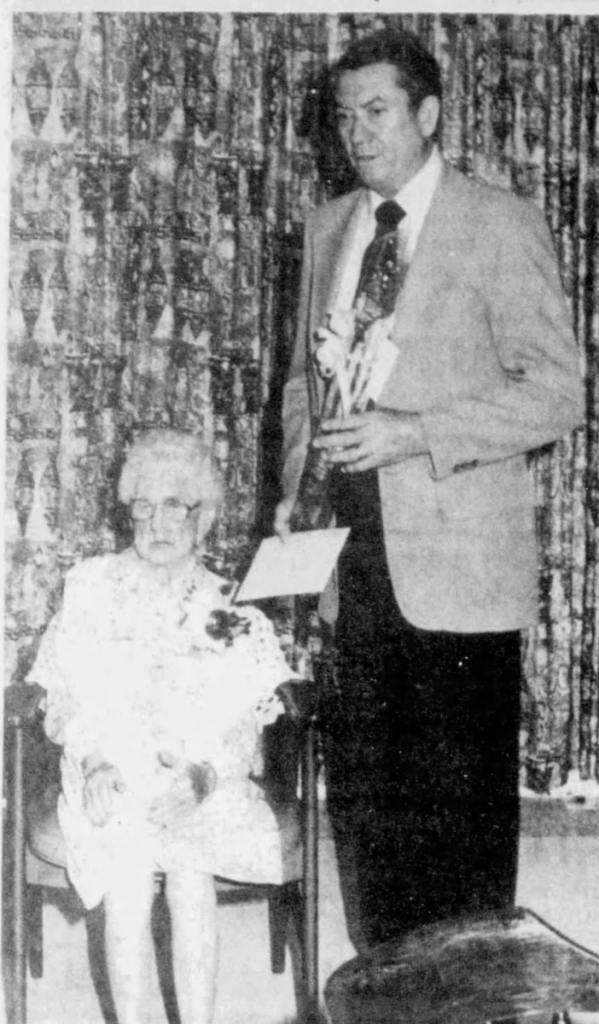 There was a period of time.

Special months for one notable person living in Ava.

During that timeframe she could lay claim to a title very few others in Ava, Missouri, or the world can claim.

The Gerontology Wiki is “a collaborative encyclopedia about Gerontology, the study of human aging and longevity, with a focus for everything related to Supercentenarians, Longevity, and Oldest People.”

And according to that website, during those 11 months, Ava’s Emma W. Wilson was the Worlds Oldest Living Person.

According to a Douglas County Herald article covering her 113th birthday on May 19, 1983, “Emma Dysart Wilson was born May 12, 1870 on a farm near St. Joseph when Ulysses S. Grant was serving his first term as president.

When she was young her mother died, and the care of the home and two small brothers became her responsibility.

In 1907 Emma accepted the job of house mother at the new School of the Ozarks, but before filling that position, she spent three months touring Europe.

During her time as the housemother at The School of the Ozarks, Emma met and married George B. Wilson, and in 1914 they moved to Ava where Mr. Wilson was an attorney. They also became active in the Methodist Church, and Mrs. Wilson served with the Women’s Missionary Society (now UMW), and for many years was the teacher of a girl’s Sunday School class.

After the death of her husband, Mrs. Wilson lived alone in Ava until she turned 99. She then moved into the nursing home, but in time decided she wasn’t old enough to be there so moved back home until she was 100. For the past 13 years, she has made her home at Chastain’s of Ava.”

For a while, the main dining room of Chastain’s nursing home (now Heart of the Ozarks) was known as “The Wilson Room” in Emma’s honor.

Timeline of mentions in the Douglas County Herald:

The Financial report from the City of mentions Emma as having donated $2.00 to an election for City Judge.

Emma is mentioned in Circuit Court Proceedings “vs. Iva Working, Damages.” The case was ongoing in April of 1933.

Emma is mentioned in another lawsuit against John A. Spurlock “replevin” The case was mentioned periodically before being dismissed in January of 1936.

George Wilson dies. He and Emma never had children.

Emma bought stock in AIDC, investing in the “future growth of Ava.” Emma’s purchase along with others from Ava residents would ultimately bring the Rawlings company to town.

Carl Henley was appointed guardian of Emma’s estate. She was 103 years old before being defined as “incompetent” by the state.

Emma is mentioned in an ambulance report as having been transported from the nursing home to Dr. C.E. Harlan’s office and returned. She would have been 110 years old for that ride.

Emma has hip surgery in Springfield. She is believed to be Missouri’s oldest living person and quite possibly the oldest in the USA at this point.

Emma passes away at 113 years old. She had been a resident of Ava for 75 years.

On lists of the 100 oldest women in the world, the “youngest” is over 114 years old, so Emma doesn’t appear.

Currently, the oldest documented woman was Jeanne Calment of France who passed away at 122 years, 164 days of age. 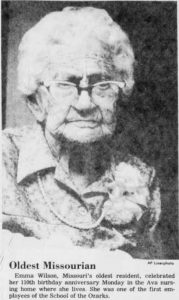