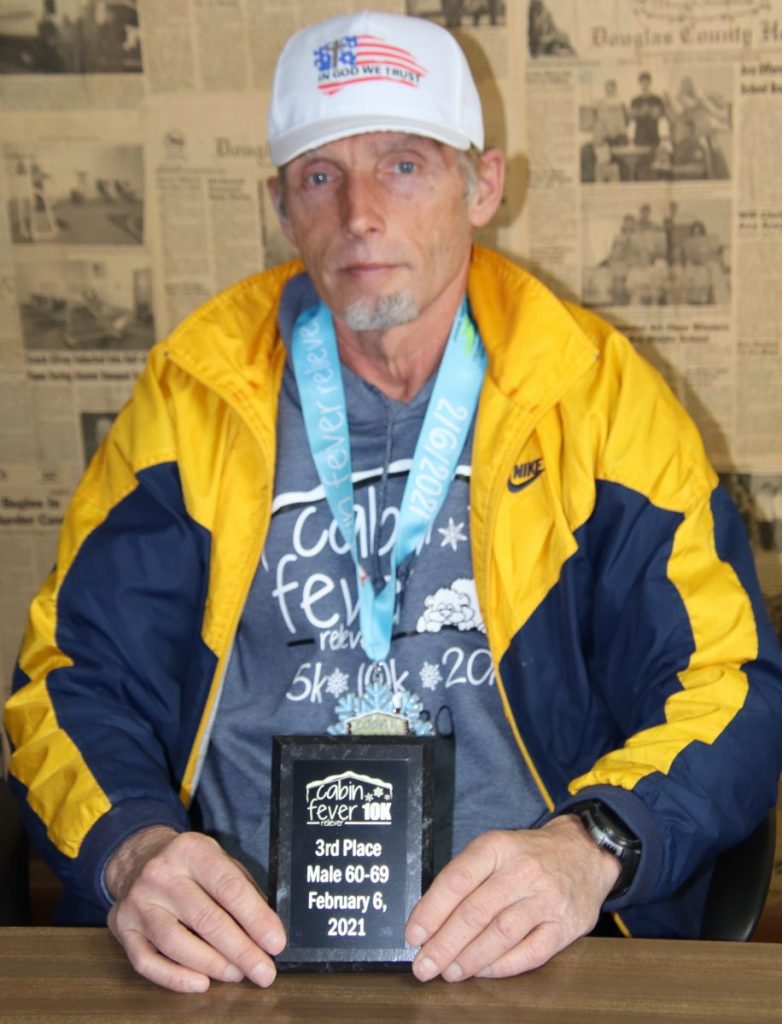 Doug Berger/Herald Gary Emrick Sr. with plaque from his recent third place finish in his division at the Cabin Fever Reliever 10K at Rogersville.

A fall off a roof stopped him for a period of time, and temperatures under 20 degrees with a wind can make him less likely to take to the pavement, but otherwise Gary Emrick Sr. is a regular runner on Ava streets and Hwy. 5.

Emrick tries to record 39 miles in a week in preparation for races, which have ranged from 5K to marathon length (26.2 miles).

“I often thought, they’d name the road (in the industrial park), the Emrick Express, as much as I’ve run that back road,” he laughed.

He indicated he normally runs five times a week and tries to take one or two days off to let his body heal. He likes to try to run one race each month, but the last year saw many of the races canceled because of the Covid situation.

“Probably because of my dad. He passed away with heart disease. It is good about maintaining your health and stress levels. You know 30 minutes of running, three times a week relieves all that stress,” Emrick related about why he runs.

He pointed out it was also a good family activity. He has competed in events with his son, grandson, granddaughter and son’s wife.

“I fell off a roof the first week of November. I didn’t break any bones, but I pulled a couple of muscles. I was two weeks on a walker in November, and I kind of slowed down a little there, but I threw away my walker and started walking with a cane, and a week later I threw away the cane and started walking. And then I got back to running. I couldn’t do fast. They were still 12 minute miles, slow for a guy that runs a seven to seven and one half minute pace. Now, I’ve gotten myself back. I ran 156 miles in January,” he stated.

Even though Emrick does not like to run when the temperatures are under 20 degrees and it is windy, he had to face some cold temperatures to compete in a recent run. Two weeks ago he ran the Cabin Fever Reliever 10K at Rogersville and placed third in his age group. He estimated there were about 300 runners in the event, which included 20K, 10K and 5K runs.

“I can run in 100 degree weather with low humidity and not even think anything about it,” he said.

He ran the former Mansfield to Ava run three times and that was one of the runs he did at high heat.

“One year they did it at 4 p.m. and it was about 90 degrees. It was easy for me, because I was used to running in heat, working in heat. I’m an outdoors person,” he said.

“When you see me headed north, I’m probably running anywhere from nine miles to 18 miles and if I’m heading south, four to seven and a half miles,” Emrick stated.

He is currently training for another marathon in Willard on April 24. He had run in the Forrest Gump Challenge in August. Emrick stated that he had been looking for a marathon, but found many were canceled.

“I had been telling everyone I was ‘a man without a marathon.’ They have virtual runs, but I’m not a big fan of virtual runs,” he said.

Emrick remembers his first marathon was the St. Louis marathon in 1986.

“I didn’t do too bad, but I never knew how to train. In ’86 I was running six mile runs, and a six mile run won’t get a marathon. Then I started running longer runs,” he said.

In 2018, he ran the White River half marathon with Ava area runners Oren Alcorn and Michael Schiff, with his son, Gary Emrick Jr., running the full marathon.

“The next year, I ran the marathon and that put me at 30 marathons,” Emrick stated.

His favorite marathon courses were in Lincoln, Neb., and Memphis, Tenn.

Emrick stated he has started running longer races again, because he can be more competitive at those distances.

“It’s harder for me to run with these younger kids now days. You have to break almost 17 minutes if you want to win those races (5K). So now I love to run marathons, and get back to running them, because I can beat them out in distance. They’re faster than I am now. I’m 60 years old, so it makes it difficult for me to run with some of them,” he stated.

Emrick indicated he has even given some consideration to some of the ultra-marathon events.

Emrick stated his first serious running was when he was an Ava High School student and ran the two-mile for Coach Larry Silvey. He graduated from Ava High School in 1978 and spent six years in the military, where he also did some running.

Emrick ran this race for 10 years.

Emrick indicated he usually tries to limit his races to within 400 miles of Ava. Some of his marathon venues have included Lincoln, Neb.; Memphis, Tenn., St. Louis-many times; Boston; and Berlin.

“I have wanted to run in the Chicago marathon, because that’s a prestigious race,” he stated.

The St. Louis marathon in 1987 was one of his most memorable.

“It started out with rain, turned into sleet and then into snow. We got about 13 miles in and had lost half the runners. There was a total of about 1,600 runners and 800 finished that race. And I remember a gentleman saying to me at 13 miles, he said if you can do this you can do anything and that’s what motivated me all my life,” Emrick stated.

Another benefit of running for Emrick is you get to meet a lot of interesting people, and build friendships.

“It’s a sport where you can meet a lot of people and they are willing to give each other suggestions. Runners tend to help each other out,” he stated.

He still will occasionally seek some free advice from Coach Silvey, he indicated. Emrick also stated that he enjoys being able to use his experience to help other runners out, both young and older.

Emrick feels running is definitely becoming a more popular sport with more people becoming involved. He pointed to the Do Run Club at the Missouri Ozarks Community Health Center, which started in 2019 under the direction of former Mountain Grove High School coach Liz Kyger, as a local example of interest. He said the group meets twice a week for runs and training activities. There are a number of local runners, both in the club and those who aren’t members, who are regular participants in running events including well known marathons, he stated.

The running club also assists in his training efforts. He pointed out that he usually does a 12 to 14 mile run before one of the Do Run Club workouts, which features some power runs.

“The next day it can take everything just to run,” he stated.

But he added that you have to do the track (speed) work to win races.

“A lot of people don’t like to do that track work, especially if over 40,” he laughed.

Emrick usually runs on most of his training runs by himself.

“I do that because when you have people with you it effects your running. If they’re running slower than you want to run or vice versa, it effects training,” he said.

Emrick states the activity does use up many running shoes.

He also has seen an increase in the entry fees for the events. He indicated when he first started the average race fee would be between $10 and $12, now it can be $40. He remembers the Boston marathon cost him $60, and now marathons can be between $90 and $100.

You have people ask if you need a ride all the time, he said.

“I did take one ride, one time. It was pouring down rain and I told the gentleman I didn’t want to get in his vehicle and get it wet. He said get in here, and gave me a ride back to my house. I was still two miles away from the house,” Emrick stated.

Emrick has been hit three times when running, but none of them resulted in serious injuries. One time he said he was more worried about the lady that hit him than himself.

“I went over the front of the van and came down on my knee. I was bleeding, but I didn’t stop. I said I’m ok, put my thumb up, and I got to thinking. She’s in shock, I should’ve stopped. I was on record time. I was running six minute miles, and you can’t stop just like that when going at a six minute pace,” he stated.

“My wife and kids keep asking, and they say dad you are old news. And I say we’ve got runners near 80 years old. I’m not quitting for at least ten more years. I’ve still got a lot of good miles that I can get,” he stated. 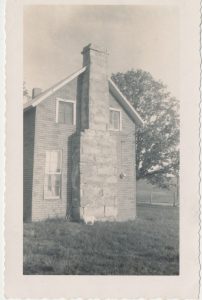 Submitted Photo
Gary first ran around the house he grew up in.