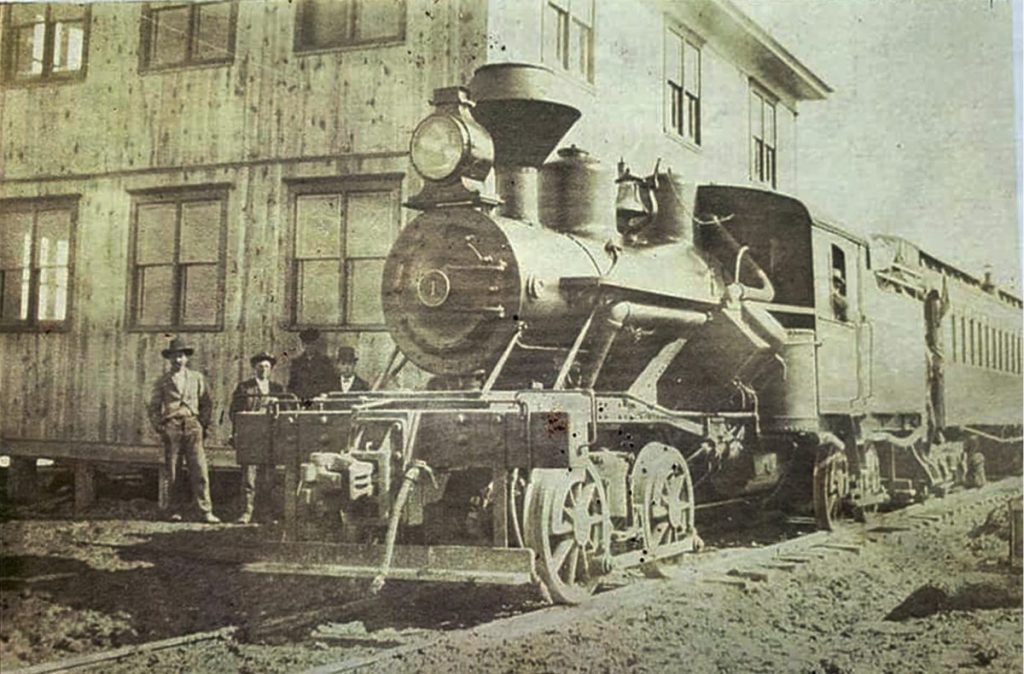 It has been over 110 years since the first railroad locomotive rolled into Ava. It was a time when the horse was still important to transportation of people and materials in the area. But today it is a modern technology which is helping with rekindling an interest in the railroad that operated between Mansfield and Ava for approximately 25 years.

The Kansas City Ozark & Southern Railway began operating in 1910. It would later change its name to Ozark Southern Railway. The railway would operate with different owners through approximately 1935.

Individual elements of the railroad’s operation have been documented in newspaper articles of the period and by local historians in a limited amount, but for two years a compilation of information on the railroad has been using a Facebook group to communicate and add to this material. In 2019 Jon Cluff began developing the location (facebook/groups/AvaRY) to collect materials concerning the railroad.

Cluff’s interest in the railroad developed from a chance conversation with Marilyn Alms.

“I was remodeling and putting some windows in the side of a building up on FF, and she (Marilyn Alms) came by and said that’s a historic structure and she was interested in what we were doing, and I said we were refurbishing it, putting some windows in it. She told me a little about the history of it…and at the time I didn’t know any of this…and she said something about a train and I said what train. I said I don’t see any evidence of a train. I’ve seen railroad stuff up by Mansfield, but I haven’t seen anything down here. She came by a week later and dropped this off (an article by the late Ken Brown involving the railroad). So I read that and I looked it up and I tried to read about it, and I couldn’t find anything, but that article. I did find something from a person that wrote “Ghost Trains in the Hills” in what was called the Sunday Leader…and I met Ken Brown… he invited me to go on a road trip with Rodney Alms to basically do a from the windshield driving tour up to Mansfield and Rodney would narrate along the way and would tell us where the corridor (railroad line) went,” Cluff stated.

Cluff found that the Douglas County Museum holds some pieces of information including photographs of the railroad.

“We would try to go to the museum when it was open and we just started looking through the directory to see anything about railroads,” he explained.

His initial interest has led to considerable work collecting and compiling material concerning the railroad, whose depot and rail yards primarily stood on and adjacent to property now occupied by the Mountain Grove School District.

Cluff indicated his interest in the railroad had led to his attending a weekly meeting of a group of folks who loved local history, and Ken Brown was a member of the group.

“I had gotten ahold of Ken and we just started talking. He had done a Facebook group for the west side of the county, and he said he was eventually wanting to start here, but he knew how much work it was to create one. So the way the Facebook group started was I told Ken I’m trying to find photos, because photos are a first person history. They show what was actually there. I asked where can I find photos. I also went to Mansfield with him and they had a picture of the Golden Spike, and I asked how can we get people to share more photos, and he said people share on these groups. So it was Ken’s idea. I said I will start one on the railroad,” Cluff stated.

Cluff indicated when it started to take off a little, he was having questions asked on a broad range of topics associated with the railroad. Topics covered in the Facebook group range from information on the locomotives, rate schedules to baseball games that where played at one of the stops the railroad made between Ava and Mansfield.

“As soon as anybody found something, and found information about it, we would post it,” he said.

“It gives a place for people to share stories, and Facebook is geared toward photos,” he said.

“I find myself more of a collector, putting a puzzle back together. Puzzle pieces are all over. The idea was just to put the pieces closer together. This company went out of business 85 years ago. It’s not a railroad that’s documented like a class one,” Cluff added.

Cluff estimates he is just scratching the surface of putting the puzzle together.

Cluff feels that the interest in developing the railroad started many years before the actual construction got underway.

“The earliest I found is that Mansfield wrote a letter to Ava and said join us in this idea to bring a railroad south toward Ava. It was related to a line that was supposed to go from Lebanon to Ava. That line started construction in Mansfield and went 10 miles north toward Hartville and failed. So the Ava folks started looking at Cedar Gap, which had quite the community over there. So they looked into a tie with Cedar Gap,” he indicated.

Cluff stated there appeared to be a number of schemes to build a railroad in the area, but they failed. It was a man by the name of J.B. Quigley from Sedalia who finished the task, but even his investors pulled back after a period of time.

Initially Quigley wanted to build an electrified railway, which is closer to a passenger system, Cluff stated. The electric railway was to be part of an electrification system for area communities, but the railway was never electrified.

The tracks for the KCO&S Railway was constructed through the hills and valleys between the two towns and covered approximately 14.5 miles. Most of the construction was done by area farmers with teams and as pick and shovel crews. The primary product hauled were railroad ties. A number of stops along the line were locations for loading these ties, Cluff pointed out. The railway also provided a passenger service, and at one time excursion trains were important.

The railroad had difficulty financially on several occasions during its operation.

“The second time it was having a hard time it was going to be dissolved completely, and there were still a lot of railroad ties being pulled out of here and tomatoes at the time, so a few local businessmen said we’ll buy it, and that was in 1922,” Cluff said.

In 1935 the railway stopped operating and later the rails were pulled up for scrap. Cluff indicated that he is not sure when freight service stopped, but he feels only the passenger service was still in operation in 1935.

It was the automobiles and trucks that were factors in the end of the railway, Cluff pointed out. He estimates that around 1937 the road between Ava and Mansfield was completely paved.

Cluff stated the Facebook group has been helpful in providing a location for the information and collecting some additional information, particularly photographs. He explained that he continues gathering information, which includes personnel who worked for the railroad, its relationship with the Frisco Railway, and information on its operation over the years. He has also developed a map of the route the railroad took. All of this material can be found on the Facebook group. People with an interest in local history and property owners who had the railroad cross their land have shown an interest, he said.

Cluff stated he just brought a new set of eyes to the search for history of the railroad. He recently completed a photo album for the railroad which includes the majority of photographs collected at this time. He will be giving it to the Douglas County Museum in hope it will help the museum staff when asked about the railroad.

“It’s kind of a fun thing. My kids get involved in the research and in the art work,” he said. 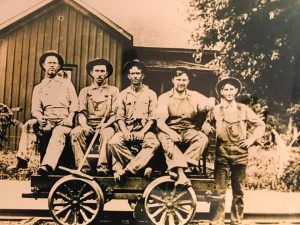 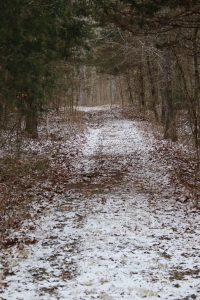 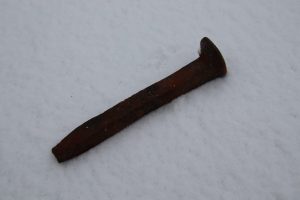 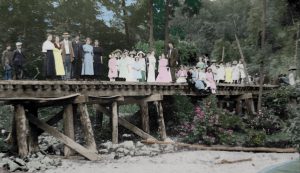 Photo provided by Cinita Brown, colorized by Cameron Cluff.
A local tradition was to celebrate 8th grade graduation with an excursion on the railroad. This photo may be of the 1911 graduation, nearly the entire town of Ava and many ‘well-wishers’ from Mansfield (500 total) boarded an excursion train and headed to the celebration and feast under the shade trees at Bryant Springs.