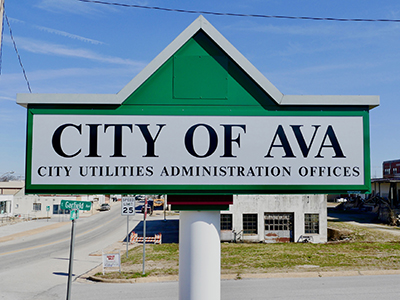 On Tuesday, October 13th, the Ava Board of Aldermen convened for a business session at 5 p.m.

City Treasurer Peggy Porter reported that the city had just over $3M in cash reserves, but some larger payments were due to go out this week. “Everyone has been doing a good job with the city’s money,” said Mayor Loftin. “And I appreciate it.”

Mayor Loftin reported that the city-wide cleanup went well, with 40 loads of brush and 24.5 tons of scrap hauled.

Loftin said that footings had been poured for the new Street & Sanitation Department building. The final concrete pouring was expected to happen next Tuesday.

The Aldermen voted 3-0 to approve the purchase of a metal building for the Street and Sanitation Department at a cost of $32,600. The vendor is Missouri Metal Buildings.

Loftin said the city was accepting bids for the labor to put up the metal street and sanitation department building. Those bids will be opened on October 27th.

Mayor Loftin said due to the mild winter last year the city would not have to buy additional salt for the roads. The leftovers from last year were expected to be enough for this year.

Loftin said crews had drilled under the streets in order to add underground water and electric into the middle of the square.

Mayor Loftin reported that the city was getting a number of calls regarding the work on the square. Loftin reiterated that once ADA accessibility work is complete he would be looking to install landscaping to add greenery back to replace the trees that were removed.

Loftin also confirmed that the work being done will not prevent large trucks from navigating the square.

Loftin said the contractor was hoping to have the work done by December 1st. Additional workers should be on the job starting next week.

There was no closed session.

Video from the Ava Board of Aldermen meeting will be posted to the Douglas County Herald’s channel on YouTube.

City officials and aldermen will reconvene on October 27th at 5 p.m. at City Hall. Meetings are open to the public.