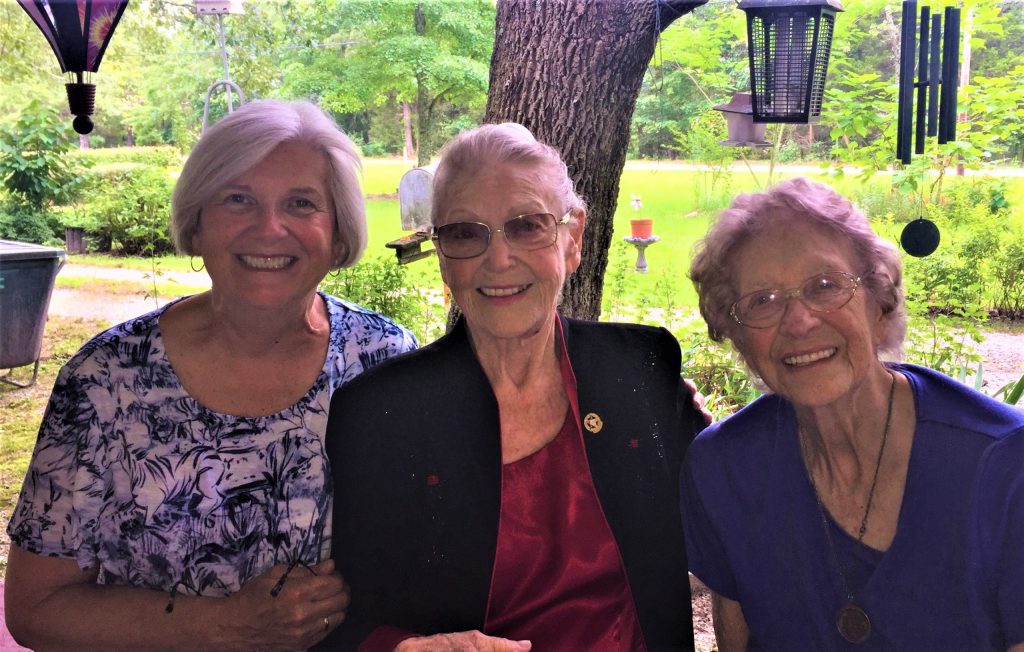 In this week of birthdays, celebrating a shared heritage.

Cousins – the very word evokes fond memories of childhood for most people, of playing together at family gatherings on holidays and vacations, of spending time together with shared grandparents, of similar-age relatives who sometimes grew to become the very best friends. The bond between cousins is made stronger with the knowledge of a shared heritage and a likeness born of shared genetics. Cousinhood is a simple yet important relationship that most people take for granted – unless you don’t happen to have any.

My brothers and I always felt slightly deprived when we were kids, when our friends talked about going to see aunts and uncles, knowing those visits meant they would also have built-in playmates. Technically speaking, we did have cousins, of course; our mom and dad both had cousins, so their children were our second cousins. But because our parents were both “only children,” we didn’t have any of the closest variety – no first cousins. Being the only grandchildren for both sets of grandparents meant that our family gatherings were small, quiet affairs. When the grownups gathered to talk about grown-up things, I would end up with my nose in a book, while my brothers did boy things together.

But as I’ve gotten older, I’ve come to realize that the generational designation of “first cousins,” “third cousins, once removed” and such really has no bearing on the closeness I can feel to relatives. It started with a conversation I had with one of my dad’s first cousins, the late Rex Ebrite, who had a strong interest in genealogy and family history and a wish to share it with me. After giving me a quick lesson, scribbled on the back of an envelope, about how a family tree grows, Cousin Rex (yes, he was my cousin, too – my first cousin, once removed!) lit a spark in me that has grown into a steadily burning desire to know all I can about my family tree – all the various branches and fruit that it has borne. What has surprised me the most is how relatives, though distantly related, can have so very much in common.

This week, two of my treasured cousins are celebrating birthdays. Cousin Helen Conardy (first cousin, once removed) will be 86 on June 30, and Cousin Linnie Ingram (first cousin, twice removed) turns 98 years young on July 1. I had hoped to have a joint celebration for them this year at the Ozark County Historium, but because of the COVID-19 threat, the party will have to be postponed until 2021. However, a party isn’t the only way to have a celebration – a written tribute will do, for now.

Cousin Linnie Ingram’s parents were George Crawford and Jennie Ebrite; Jennie was the baby sister of my great-grandfather, Earle Ebrite. Their parents were George and Sarah Ebrite, who came to Ozark County from Pennsylvania (after spending a few years in Illinois, where Jennie was born). Linnie, born July 1, 1922, was the youngest of George and Jennie Crawford’s three daughters (a boy died in infancy); her sisters were Ruth Moody and Edith Adamson.

Family was very important to Jennie, and young Linnie spent lots of time with her Ebrite aunts, uncles and cousins. Her uncle Earle Ebrite owned the Ozark County Times, which was located in the same place it is today, on the square in Gainesville. His family home joined the business property, and Linnie recalls spending many Saturday afternoons climbing in the mulberry tree on the back of the lot, while the grownups sat on the porch and visited. She also recalls playing with the pieces of lead that were used to create type to print the paper on the old Linotype, an antique still on display in the Times office.

When Linnie was only 13 years old, her mother suddenly died, leaving her as the only child still at home. She immediately fell into the role of housekeeping for her father while also going to school and helping her father with all the chores on the farm.  Linnie was a self-proclaimed tomboy whose favorite wardrobe essential was her overalls, purchased at Newt Ford’s store on the square. She loved all the pockets!

Linnie married Eldon Pitcock in 1939, and the couple had four children: Karen (recently deceased), Marlyn, Lyndon and Kris. She has 12 grandchildren, 20-some great-grandchildren and several great-great-grandchildren. After Eldon’s death in 1971, a treasured family friend, Glen Ingram, began driving Linnie to church. His wife had passed away, so the rekindling of their friendship, which extended from their youth, led to a happy second marriage for both. Glen passed away in 1994.

Linnie has always loved to write. In addition to jotting down the day’s events and private thoughts in her personal journal, she has written the Lilly Ridge or Tecumseh “items” for the Ozark County Times for decades, following in her mother’s footsteps. Her loyal readers enjoy the bits of history she passes along, remembering how things used to be. Even when writing about hard times, Linnie is able to make life seem like an adventure; she is blessed with an outlook that sees the half-full glass, rather than the half-empty one.

And Linnie values her family heritage. She says it means more than anyone realizes, recognizing that talents, skills and knowledge are handed down from generation to generation.

Although Linnie says she has been blessed with an interesting and full life throughout her 98 years, her family members and friends know that she has actively blessed all who know her, greeting everyone with a bright and cheerful smile, ready to impart a bit of wisdom or cheerful word of encouragement. 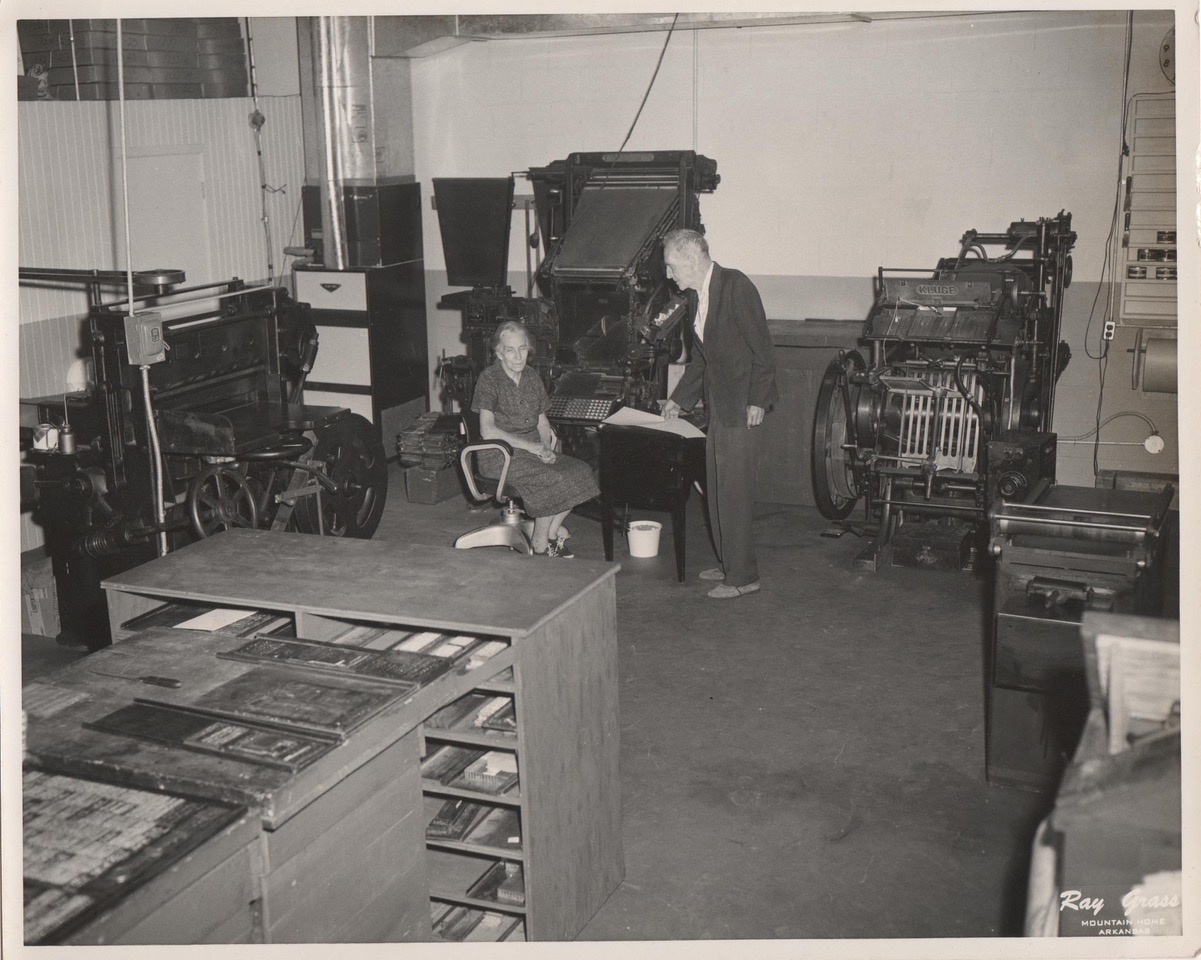 Ray Grass/Mountain Home, Arkansas
Helen Ebrite Blisard is shown at the Linotype machine in the Times office with her brother, Dewey Ebrite, in the early 1960s. Helen’s daughter, Helen June Blisard (Conardy) slept in a little bed that was installed beside the Linotype where her mother worked.

Growing up in the Times office

While Linnie grew up visiting her uncle and his family at the Times office, her first cousin once removed, Helen June Blisard, practically lived there from the time she was two weeks old until she left home as a grown woman. Her mother, Helen Margaret Blisard, worked as a Linotypist for her father, Earle Ebrite, who was the paper’s editor and publisher.

Helen Margaret Ebrite had married Lonnie Blisard at age 40, so the birth of her daughter a couple of years later was a delightful surprise. But as the only Linotypist in town, there was no option for her to quit working. A bed was constructed beside the Linotype machine, where the infant Helen observed all the comings and goings of the busy office.

Today, Helen June says she has never seen a stranger, giving credit to her upbringing in the newspaper office. When she graduated from the baby bed and began to walk, a gate was constructed to keep her from wandering up the steps into the office and out onto the street. When she was a little older, Helen June rode her tricycle up and down the streets of town with her little dog, Penny, riding behind her with his paws on her shoulders. Merchants would send her home if they considered she had been gone from the office too long.

The Blisards lived in a two-story house that stood on the southeast corner of the square, next to the small free-standing building still owned by the Blisard family just a few steps from the Times office. Everyone who came to town, from politicians to businessmen to professionals and local farmers, all stopped by the Ozark County Times office to visit, share news and renew subscriptions. Helen June was the “official greeter,” hailing each one by name in a friendly manner. She enjoyed knowing people and knowing what was going on in her world. And like several of her Ebrite cousins, she worked from time to time at jobs for her grandfather.

Helen June remembered that her Grandfather Earle challenged her and her other cousins to memorize a poem in German, the Ebrite family’s original language. Helen and cousins Rex and R.J. Ebrite all received the amazing sum of $10 for memorizing the entire poem; Helen June can still quote parts of it, an ode to a rooster who crowed loudly to wake up the children.

After high school, Helen June worked for the Department of Social Service, spending 41 years as a state employee. She was county director in several counties, obtaining a degree in psychology and sociology at Drury College while working full time. She then transferred to Jefferson City, where she was administrative assistant to the general counsel for the department, the only non-attorney in the office. She spent the last 15 years as county director for Ozark County. In 1982, she was named to the Who’s Who of American Women, and in 1984 she was named in the World’s Who’s Who of Women.

In 1994 Helen June married Jim Conardy; he passed away in 2016. She has two children, the late Joseph Lee Gott, and Lynette Hicks, who lives in Gainesville and helps take care of her mom.

Like Cousin Linnie, Helen June is a positive and cheerful person, choosing to see the world in a positive light, even when life presents her with challenges. Both women face each day with a sparkle in their eyes and a smile on their lips for everyone they meet.

A likeness born of shared genetics

It’s true that I don’t have any first cousins. And because I’m from another generation, my childhood didn’t resemble most of the things that Linnie and Helen June experienced growing up in a small-town Gainesville. But knowing these women as adults has made me realize that we have more things in common than not. I like to think I am a positive-outlook kind of person, as they both are. I try to meet life’s challenges with the same sort of “I can do this” attitude they both demonstrate. I like to write, like Cousin Linnie, and I cherish our hometown newspaper, as they both have always done. I no longer feel deprived of cousins – I just had to grow up to find mine!