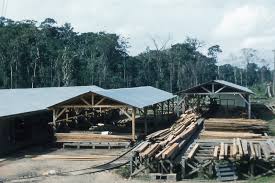 There was a time in my life when I needed to get out of the work I had been doing for the past 18 years. It was no longer the job I felt I should be in and I wanted something new. This brought me to a place in the old Ozark hills where there was an old, run-down sawmill owned by an old, run-down man. I was told by a friend who worked for him that if I could give The Old Man 40 hours a week, then I had the job. The next day, a good handful of years ago in the middle of winter, I met Dee Cutbirth. He looked at me, tugged on my beard and simply said, “You’ll do.” I was now a sawmill man and had no idea of what I was in for.

I had spent almost two decades in the corporate world. Sure, I had also been lumberjacking, landscaping and other forms of hard work before, but my body was not ready for a very full 40 hours of sawmill work.

I was put on ties and slabs to start. It took all of 30 minutes to get buried in the work. I had slabs everywhere and ties were falling off the Green Chain. And they kept coming. 300 pound railroad ties became my enemy and they came with an army of pesky minion slabs. I had to piece together old banding strips to hold the slabs together to be hauled off. I had never used banders before and my teacher was a 20 year old who was higher than a kite. I decided to just figure it out myself.

In the meantime, more slabs, more ties. Every time I saw a tie coming I said a prayer. The prayers were not necessarily out of faith, but out of desperation. Eventually I sang work songs, spirituals, anything to get me through. My arms felt like shredded meat.

When I got home, I actually took baths. Then, I went to sleep. Reluctantly, I went back to work the next day. Dee Cutbirth, The Old Man, didn’t let up. He kept burying me with slabs and those dang ties. Then one day, he didn’t. It wasn’t because he had mercy on me, because that lumber just kept coming. He didn’t bury me because I was beginning to keep up.

The other men must have had a good laugh at me. In fact, I know they did. I heard the laughs and the trash talk. But as the weeks went by the others began to quit. One by one, they were dropping like flies and I was still there. My prayers and songs became less about desperation and more about faith. God was pulling me through. My body was adjusting to the work and I was beginning to like it. Actually, I was beginning to love it. I was now being trained to grade lumber. Joe Fleetwood, possibly the best sawmill man I’ve known, was teaching me everything he knew. There aren’t many kind words to be said about Joe’s personality, but as a sawmill man he may have been the best.

Dee was a hard man to work for. He had one rule: come to work ready to work. You may be surprised how hard that rule is for some men. But, if you followed it, you would be in good with him.

He is one of the toughest men I’ve ever known. One day, he climbed up onto one of the loaders and fell off, landing square on his hip. The next day he was at work on crutches and climbing the rickety uneven stairs of the log peeler. He was 80 years old and back to work with a bum hip while I have seen many men call in because they had a cold.

Sawmilling is hard work. It is good, honest, traditional work for men and I am glad that I get to do it. I’ve seen football players try to do it but couldn’t handle it. A marine once tried and lasted only a week.

I went from feeling like I was going to die at the mill to slinging ties and grading lumber and thinking that some days are too short. I feel like I get paid to do my hobby.

Shortly before Dee retired I sat down and talked with him. I thanked him for kicking my butt years earlier. He said to me, “Well, I knew you could handle it.” He didn’t favor me or coddle me. But since he didn’t, I soon saw what I was made of because The Old Man did not let up on me.

Every day at work, as a new boss runs the mill, I get through by picturing two men standing and watching me work. My father and Dee Cutbirth. If I feel like I am working in a way that would please them, I always say, “It was a good day’s work.”