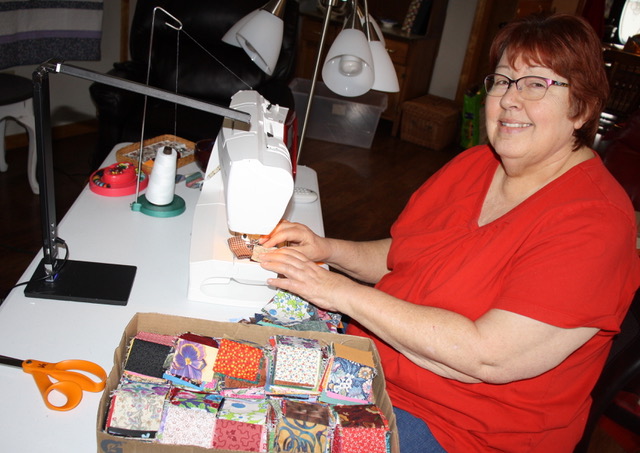 Photos submitted Virginia McMurtrey enjoys challenging quilt patterns and loves trying new techniques, but she also enjoys using up her scraps in simple ways. She manages her huge scrap collecting by cutting pieces into usable-sized squares and strips. Here, she is pairing 2-inch squares to be made into 4-patch units. She calls this “mindless” sewing, but when she is finished with these, a pile of unmatched, seemingly unorganized blocks will be transformed into a beautiful quilt.

The Ozark County Historium’s current quilt display features a small sampling of the creations of Dora quilter Virginia Rose Gaskell McMurtrey. To say that Virginia has been a prolific quilter is stating the fact mildly. Four huge notebooks, also on display, are filled with photos and stories that tell the tale of more than 60 years’ worth of sewing, quilting and embroidery, starting when Virginia was in the fourth grade. In the ensuing years, she hasn’t stopped, and there is no end in sight!

Virginia was born into a family that sewed. Growing up in Waterloo, Iowa, the entire family spent several years operating a cottage-industry business, Ginni Rose Dolls, that was the brainchild of Al Gaskell, Virginia’s father. Her mother, Mary, her sisters, Marie and Jan, and Virginia all sewed doll clothes in their home, putting together kits of dolls and wardrobes of various styles and designs. The quality of the Ginni Rose products helped make them very popular, and it was a good way for the young Gaskell girls to perfect sewing skills that they have carried on throughout their lives. All three sisters are gifted quilters, known for the quality of their work.

Carl McMurtrey, Virginia’s husband, is a Dora native, with deep roots in the Ozarks. When he was still a child, his family moved to Kansas City, where Carl’s father worked for TWA. He met his bride in their very first class at what was then called Central Missouri State College in Warrensburg. Virginia pursued a degree in elementary education (breaking the Gaskell mold – her mother and sisters were all home economics majors), while Carl went west, where he received Airframe and Powerplant Certification. After her graduation and their marriage, they lived where Carl’s job took him, but because he had always loved Ozark County, the couple moved back here in 1970. He then farmed and owned an over-the-road trucking company.

Virginia’s career in education consisted of nine early years in the classroom, followed by her certification as a speech pathologist. She later worked as a supervisor of speech pathology over several schools in south central Missouri; she retired in 2019 after spending 53 years in education. Carl and Virginia also raised three children, Rosie, Gary and Vicky, and have four grandchildren.

However busy the McMurtreys’ lives were, there has never been a time that Virginia was not working with her hands.

“I started when I was in the fourth grade, when I had the measles,” Virginia recalled. “Mother wanted me to do something while I had to stay in the house, so she taught me to embroider. I fell in love with embroidery, and I still enjoy it as much as ever; I always have something to work on.” 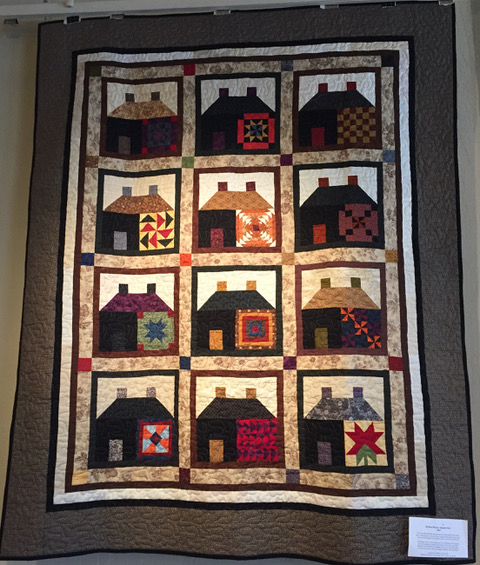 Historium volunteer Janet Taber says Ryoken Houses is her favorite McMurtrey quilt. “Each ‘house’ features a 6-inch quilt block,” she says. This was a “Block of the Month” project.

Virginia was a natural with a needle. When she was in high school, she earned extra money by baby-sitting, and she always took along some sort of handwork to do, embroidering pillowcases, tablecloths, dresser scarves and other pieces. At that time, she was also working on a huge project, embroidering quilt blocks featuring the state birds of all 50 states. Virginia gifted the quilt to her older sister, Marie, when she got married. A similar quilt is part of the exhibit currently on display at the Historium, and Virginia plans to make another one.

Making multiples is a facet of Virginia’s quilting well known throughout her huge circle of family and friends. Rarely does she just make one of anything! All of her children and her many nieces, nephews, grandchildren, extended family members and fellow club members have been the recipients of hand-sewn items made by this generous quilter.

“I made the ‘mistake’ of asking my niece what kind of wedding quilt she’d like to have,” smiled Virginia, “and she answered with the Double Wedding Ring. Not the quickest or the easiest quilt to make – and now I’ve made six of them!” 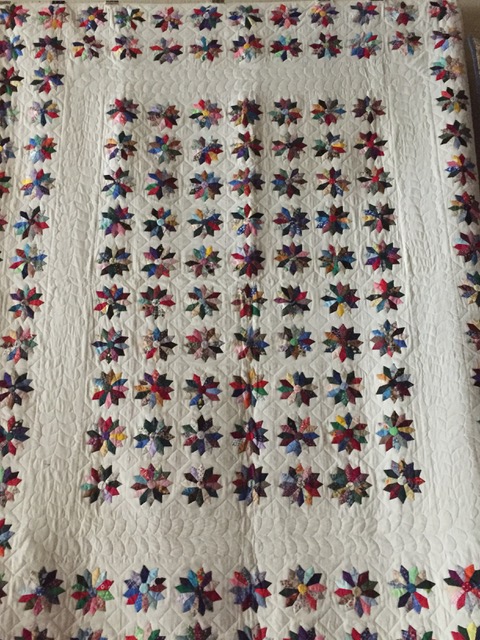 Virginia has donated more quilts than she can count for various charitable purposes, for auctions and raffles. She put together a book about quilting for a fundraiser for the Dora PTA, and she makes dozens of quilts to simply give away for any worthy need.

While she spent more than a half-century in public education, Virginia has also been actively sharing her talents with anyone who wants to learn to quilt, teaching beginners who are starting from scratch or helping intermediate quilters perfect new skills and techniques. She leads a group in her community called the Dora Country Club, hosting them in her home weekly and sharing a huge stash of fabric, notions, tools and patterns. For the last three years, Virginia has also led the Ozark County Historium Quilt Group, which meets on the first and third Fridays of each month. Her instruction, guidance and inspiration are invaluable to anyone lucky enough to benefit from her tutelage.

“My favorite part of the quilting process is the creative part,” Virginia noted. “I love choosing a pattern and then picking the fabrics to make it. And I love cutting! My favorite tool is the rotary cutter.”

Virginia’s quilts will be on display at the Historium for about six weeks. There is no charge to view them; simply visit the Historium during its business hours, 10 a.m. to 2 p.m. weekdays (except for holidays or when school is closed for inclement weather.) For more information, call the Historium at 417-679-2400, or email ozarkco2@ozarkcountyhistory.org