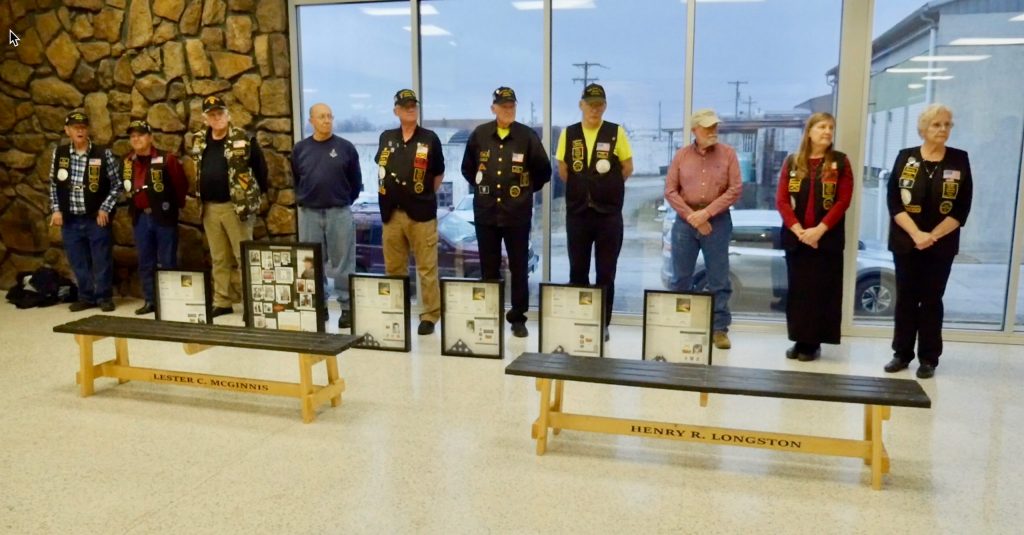 Michael Boyink/Herald Members of the Douglas County Veterans Memorial Association stand with the shadow boxes and benches being donated to City Hall on Tuesday night.

On Tuesday, February 25th, 2020 the Ava Board of Aldermen convened for a business session at 5 p.m.

Members of the Douglas County Veterans Memorial Association presented the city with six shadow boxes, one each for each Ava veteran whose name appears on the Vietnam Memorial Wall. Also presented to the city were four bench seats bearing the names of the veterans.

City Treasurer Peggy Porter reported that at the end of January the city had $2.4M in reserves.

Ava Mayor Burrely Loftin reported that the city’s trash truck needed some work recently to repair a short and reprogram the computer.

Loftin said the bearing replacement was complete on the Waste Water Treatment Plant’s Clarifier. The bearing was $1800, and the labor to replace it was $1700.

Loftin said there had been a crew at the airport, doing a site survey and taking samples of the ground in order to allow more accurate bids for runway lights.

Engineering plans for the improvements on the Ava Square are in the hands of MODot for review. Once approved, Loftin will begin seeking bids on the work.

Mayor Loftin said the city was continuing to pursue a system for cardboard collection.

Loftin reported that the project to install three emergency generators is just about completely done.

In a 4-0 vote, the Aldermen approved the recommendation of Sherry Wallace, Ava Parks and Recreation Director, to rehiring Brad Evans to run Summer League Baseball, Joey Swofford as Lifeguard Instructor/Manager, and Kelli Williams as Swim Team Coach and Instructor.

In a 4-0 vote, the Aldermen approved the purchase of an additional sunshade for the pool at a cost of $8546.

Loftin said that he had gotten a bid for $34K for a new metal building for the city’s street department to work out of. Loftin said he had also requested an engineering plan and drawings for the footings at a cost of $1200.

City officials and Aldermen will reconvene on March 10th at 5 p.m. at City Hall. Meetings are open to the public.