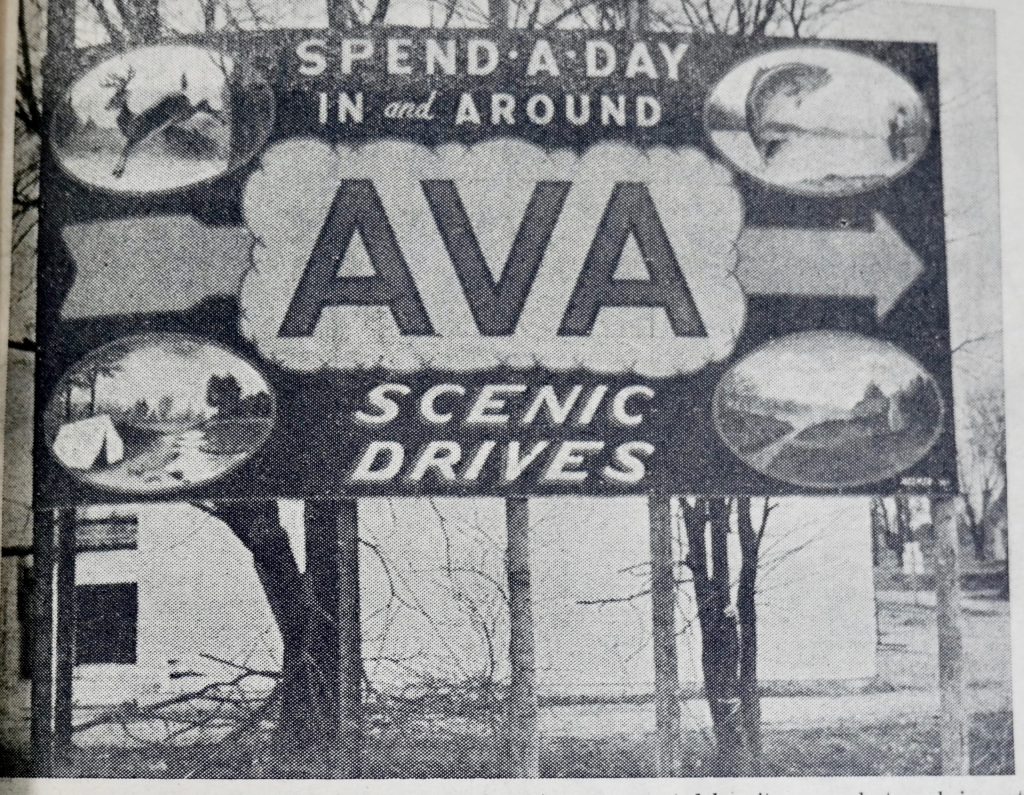 In 1962, the Ava area Chamber of Commerce installed this sign at the junction of Highways 5 and 76 to attract travelers back from the Highway 5 bypass into downtown Ava.

Three years after routing Highway 5 around Ava, the State Highway Commission came back to see how it impacted the city.

Two simple words that, put together, define an even more American concept.

Road trip movies abound – from the Blues Brothers, to Easy Rider, to Dumb and Dumber, to Planes, Trains and Automobiles.

In each of those movies, the main characters find the closest on-ramp to one of America’s 70 multi-lane interstate highways, set the cruise control to 70MPH, and kick back for several hours of uninterrupted driving. 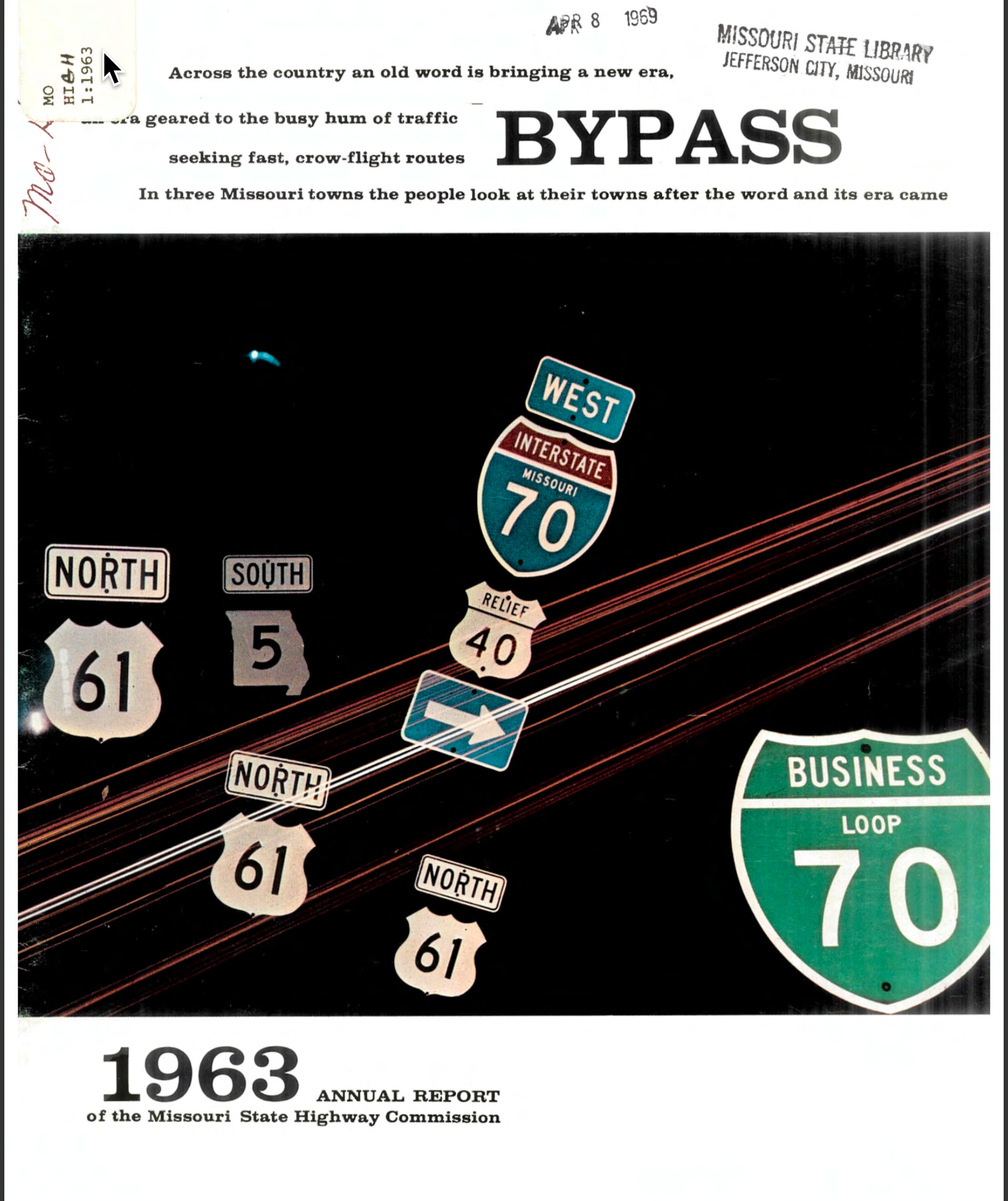 In 1963, the Missouri State Highway Commission (which later become MODOT) revisited Ava and two other towns that had been bypassed with new highways. The report interviewed several residents and business owners to determine the impact of the Highway 5 bypass on Ava.

Charles Kuralt, the CBS broadcaster who spent more than 20 years traveling the USA by wheels for his On The Road series, once said:

“The interstate highway system is a wonderful thing. It makes it possible to go from coast to coast without seeing anything or meeting anybody. If the United States interests you, stay off the interstates.”

Good road trip movies do just that. They stay off the interstates. They take the roads less traveled, the blue highways, the little two-laners that bring the main characters  into small towns.

But, in many cases those small towns have been bypassed by the big interstates.

And we all know what happens to towns that get bypassed, right? Businesses close for lack of customers. With fewer jobs available, people move away. The town slowly withers on the vine. 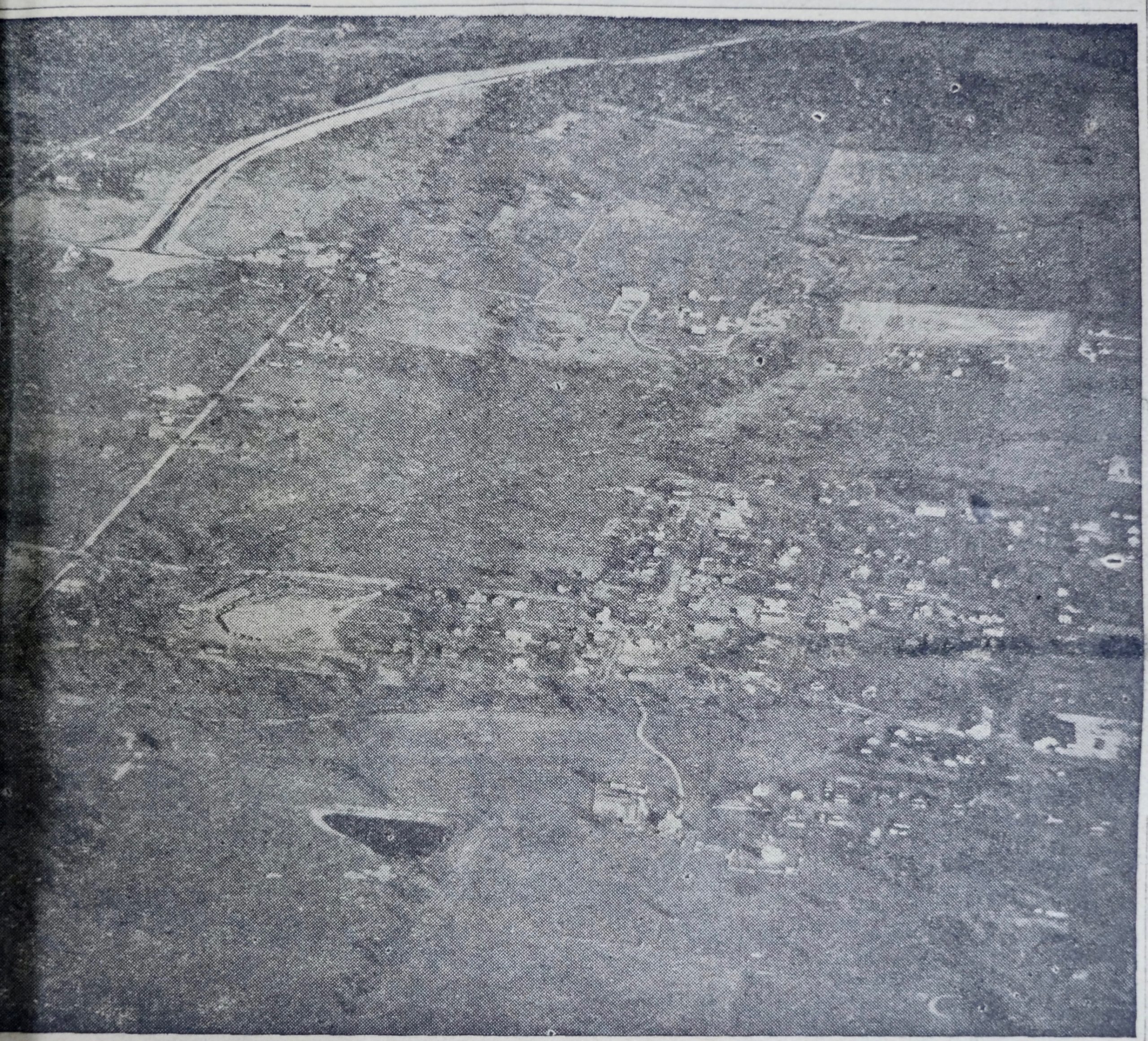 From the Herald in 1960: This air view of the west and northwest part of Ava and the junction of new highway 5 with Highway 14 was photographed Tuesday, November 17, 1960 by G.M. Threleld, director of information for the State Highway Department, while he was in Ava for dedication ceremonies for the new road. The camera is pointed north, with the junction in the upper left corner, and the road curving to the right. The light colored area at the left center is the fairgrounds, and below that and to the right is a large pond on the Olen farm. The light colored rectangle in the upper right is the newly graded industrial tract, site of the Rawlings factory building. At the extreme right edge, just above the corner, is the light-colored area of the Ava Lumber Company Yard.

Route 5 used to run through the Ava square. The bypass re-rerouted traffic around the western edge of town.

50 property owners had to be negotiated with. A little over 5 miles of new road had to be built.

What happened then? Did the bypass kill local business? Did people lose jobs? Did the town population shrink?

In 1963 the Missouri Highway Commission wondered the same thing.

They came to town and interviewed and photographed local residents and business owners, hearing first-hand what impact the highway bypass had on them.

The result was published in the Commissions 1963 Annual Report.

Over the next several weeks, the Herald will re–print all of the Ava-related portions of the 1963 Missouri Highway Commission’s Annual Report.

We hope you enjoy the peek into the time capsule of Ava’s history.