The landline that took four phone calls, nine people, and Facebook to get installed here in Ava?

Mainly because our employment arrangement changed. Initially, MsBoyink and I were working different schedules. Since I don’t carry a cell phone, I wanted the landline in case an emergency happened while she was at work. We work the same shift now so her cell phone is always around. 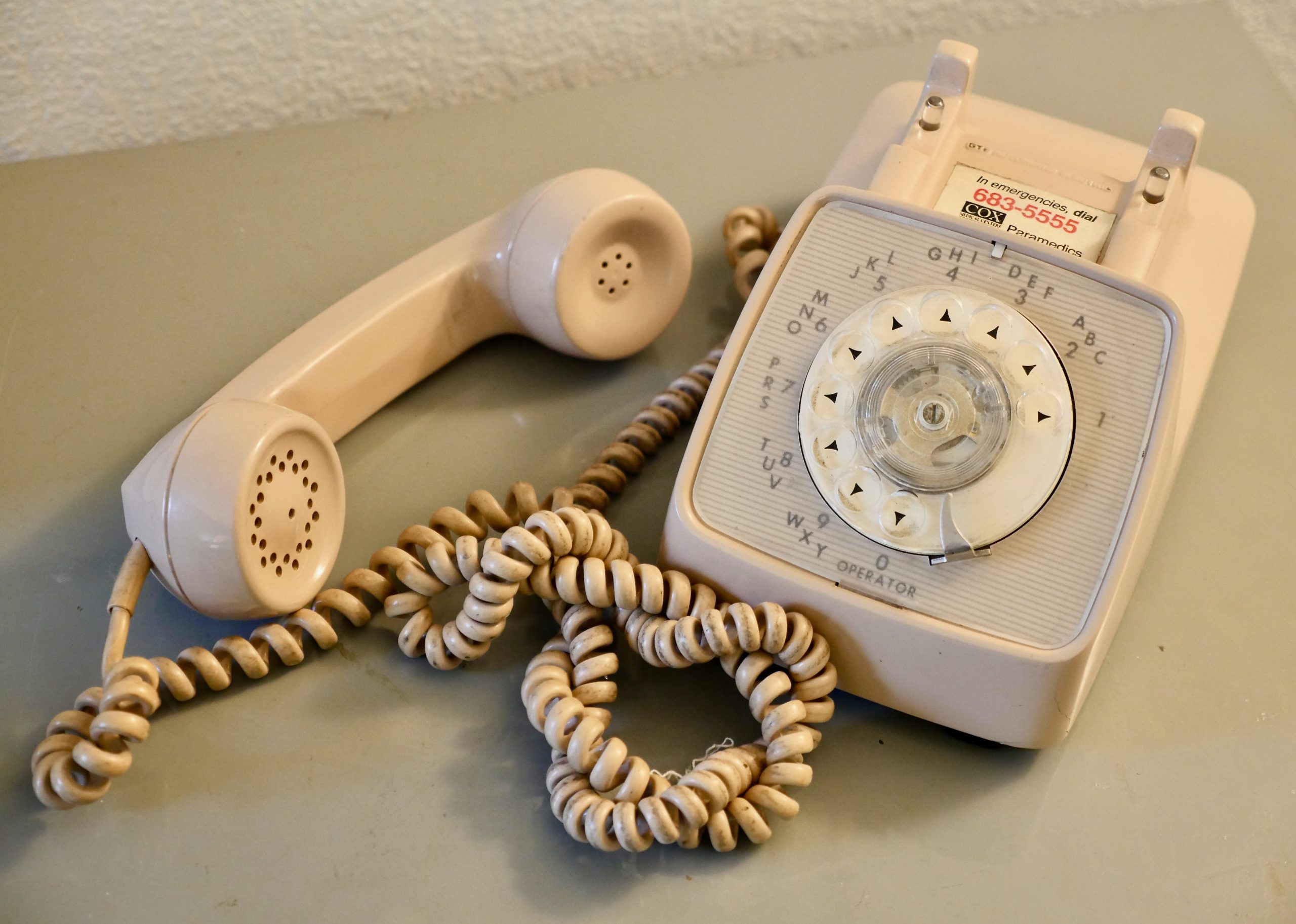 I wonder how many of your voices ever came from the handset of this rotary-dial phone found in the Herald offices. Michael Boyink/Herald

I’m too young to remember party lines. But I’m old enough to have grown up with corded phones.

I miss the way phones sounded when they rang. Not a chirp. Not a trill. But rather a pleasing ring created a by clapper striking actual steel or brass bells.

I miss wanting to answer the phone because I could find out who was sweet on my brother or sister. If I missed answering the call I could follow the twisted, tangled 25’ phone cord to see where they were trying to hide while talking.

I miss watching them trying to decide which was more important – finding a private place to talk or guarding the wall-phone’s switch-hook from prankster brothers threatening to hang up the call.

I miss the sound of an actual busy signal.

I miss being able to cradle the handset between my shoulder and ear. I saw a lady at Walmart doing that with her cellphone and it looked like magic.

I miss rotary dialing and hating those friends that had lots of nines or zeros in their number.

I miss the satisfaction in physically slamming a phone down after an argument. Swiping your thumb harder just isn’t the same.

I miss knowing exactly where to find the phone when it rang.

I miss not worrying about keeping the phone battery charged. (On the other hand, you couldn’t blame a dying phone battery trying to end an unwanted conversation.)

I miss phone calls being almost 100% from friends, family, or work.

I miss the lifestyle that landline phones made sense in. Roger Cohen is a columnist with the New York Times. In a recent article he said:

“In the landline world there was down time. You left the house, you looked around, you saw people, you daydreamed, you got lost, you found your way again, you gazed from the train window at lines of poplars swaying in the mist. Time drifted. It was not raw material for the extraction of productivity. It stretched away, an empty canvas.”

Ubiquitous smartphones have changed us, and I’m not sure we fully understand how much yet. I’m nostalgic for those simpler times with less technology.

The nostalgia wasn’t worth the $50/month CenturyLink was charging for a simple landline.

In a final ironic twist, using Facebook was the most efficient way to cancel it.

Posted in The Snoop