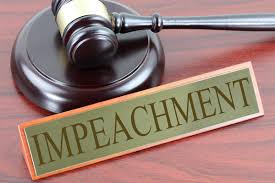 Introduces Legislation for Senate to Amend its Impeachment Rules

WASHINGTON – Congressman Jason Smith (R-MO) introduced legislation for the Senate to amend its Rules of Procedure and Practice When Sitting on Impeachment Trials. Smith is calling for Members of the United States Senate who are actively running for President of the U.S. and campaigning against President Trump to recuse themselves from the Senate’s impeachment proceedings.

There are currently five U.S. Senators, Elizabeth Warren (D-MA), Bernie Sanders (I-VT), Amy Klobuchar (D-MN), Cory Booker (D-NJ), and Michael Bennet (D-CO), who are seeking the Democrat Party’s nomination for President of the United States, which puts them on a collision course with President Trump in next year’s election and means they are unable to serve as an impartial juror during an impeachment trial of their political opponent.

There is already a process outlined in the Constitution to protect the legitimacy of an impeachment trial that involves the President. This includes having the Chief Justice of the Supreme Court, instead of the Vice President, preside over the trial because of what the Vice President stands to gain in that situation. Congressman Smith says a similar thought process should be applied to Senators Warren, Sanders, Klobuchar, Booker, and Bennet.

“Just how the Founding Fathers understood the clear conflict of interests that the Vice President would have in an impeachment proceeding, there too exists a conflict of interest for a number of Senators who are trying to become their party’s nominee and face Trump at the ballot box,” said Congressman Smith. “This resolution is all about fairness. No Senator should participate in this trial when they are able to abuse their power in the United States Senate by attempting to remove their political opponent and help their own political ambitions.”

The Supreme Court established in Nixon v. United States that the Constitution grants “the sole Power” to try impeachments “in the Senate and nowhere else”; and the word “try” “lacks sufficient precision to afford any judicially manageable standard of review of the Senate’s actions.” In other words, the Senate has unchecked authority to establish the rules of its own proceedings in an impeachment trial, including by precluding members with a conflict of interest from participating.

On Thursday, Speaker Pelosi announced she was instructing the House Judiciary Committee to formally draft Articles of Impeachment against President Donald Trump. If the Articles pass the House of Representatives, then they would be sent to the Senate to begin the trial.