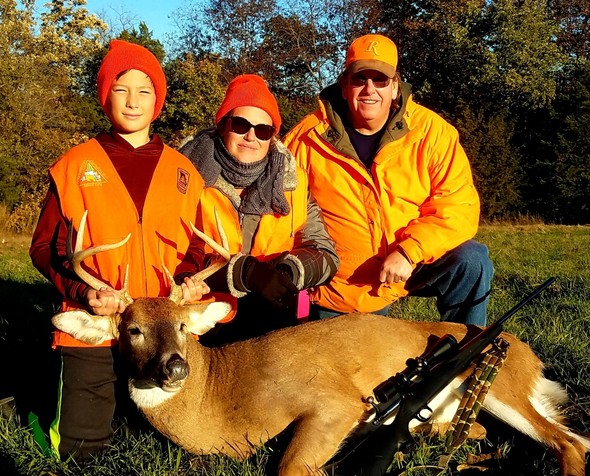 MDC Photo Congratulations to first-time deer hunter Troy Fox (left) on taking this buck during the early youth weekend. He is pictured with his mom Meridithe Greene and hunting mentor Terry Pollard. Troy was one of seven young hunters who joined MDC staff and volunteers for hunting lessons in Columbia on Saturday followed by a mentored hunt. Young hunters harvested 18,158 over the early youth weekend.

JEFFERSON CITY – Preliminary data from the Missouri Department of Conservation (MDC) shows that young hunters ages 6 through 15 harvested 18,158 deer during Missouri’s early youth portion of the 2019 deer hunting season, Nov. 2 and 3. Top counties were Osage with young hunters harvesting 381 deer, Howell with 355, and Franklin with 351.

Last year’s harvest total for the early youth portion was 13,645. Get more information on past-season deer harvests at huntfish.mdc.mo.gov/hunting-trapping/species/deer/deer-harvest-reports/deer-harvest-summaries.

“We had great weekend weather for deer hunting,” said MDC Deer Biologist Kevyn Wiskirchen. “It was chilly, but not freezing, which is good for deer movement.”

Habitat loss and unregulated hunting decimated Missouri’s native white-tailed deer numbers to mere hundreds by the 1930s. Deer were mostly limited to small herds in the Ozarks when the voter-approved and newly-formed Missouri Conservation Commission closed deer hunting in 1937. Then the restoration work began. In 1944, the newly-created Missouri Department of Conservation held the first modern deer season with 7,757 hunters harvesting 519 bucks during a two-day, bucks-only season in 20 counties. MDC’s ongoing conservation efforts — in partnership with landowners, hunters, and others — have brought deer numbers back! Missouri now has more than a million deer throughout the state with about a half-million deer hunters harvesting hundreds-of-thousands of deer annually. Deer hunting also helps boost business in Missouri communities by more than a billion dollars annually while nourishing family traditions for many and putting food on the table for even more.