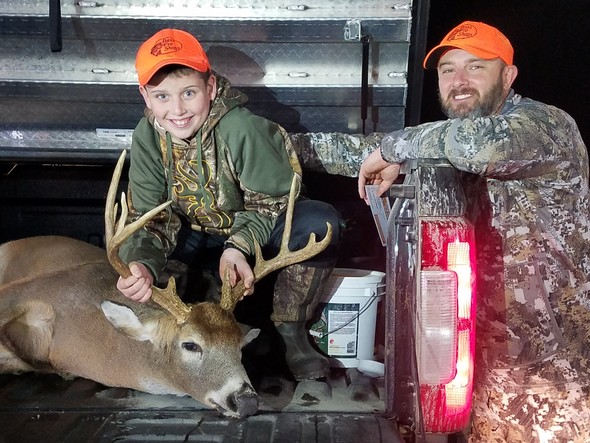 JEFFERSON CITY, Mo. –– Preliminary data from the Missouri Department of Conservation (MDC) shows that deer hunters in Missouri harvested 88,843 deer during the opening weekend of the November portion of the fall firearms deer season Nov. 16 and 17. Of the 88,843 deer harvested, 51,086 were antlered bucks, 8,115 were button bucks, and 29,642 were does.

Top harvest counties for opening weekend were Franklin with 2,078 deer checked, Texas with 1,931, and Callaway with 1,735.

For current ongoing preliminary harvest totals by season, county, and type of deer, visit the MDC website at extra.mdc.mo.gov/widgets/harvest_table/

For harvest summaries from past years, visit huntfish.mdc.mo.gov/hunting-trapping/species/deer/deer-harvest-reports/deer-harvest-summaries

Celebrating 75 years of deer hunting: Habitat loss and unregulated hunting decimated Missouri’s native white-tailed deer numbers to mere hundreds by the 1930s. Deer were mostly limited to small herds in the Ozarks when the voter-approved and newly-formed Missouri Conservation Commission closed deer hunting in 1937. Then the restoration work began. In 1944, the newly-created Missouri Department of Conservation held the first modern deer season with 7,757 hunters harvesting 519 bucks during a two-day, bucks-only season in 20 counties. MDC’s ongoing conservation efforts — in partnership with landowners, hunters, and others — have brought deer numbers back! Missouri now has more than a million deer throughout the state with about a half-million deer hunters harvesting hundreds-of-thousands of deer annually. Deer hunting also helps boost business in Missouri communities by more than a billion dollars annually while nourishing family traditions for many and putting food on the table for even more.