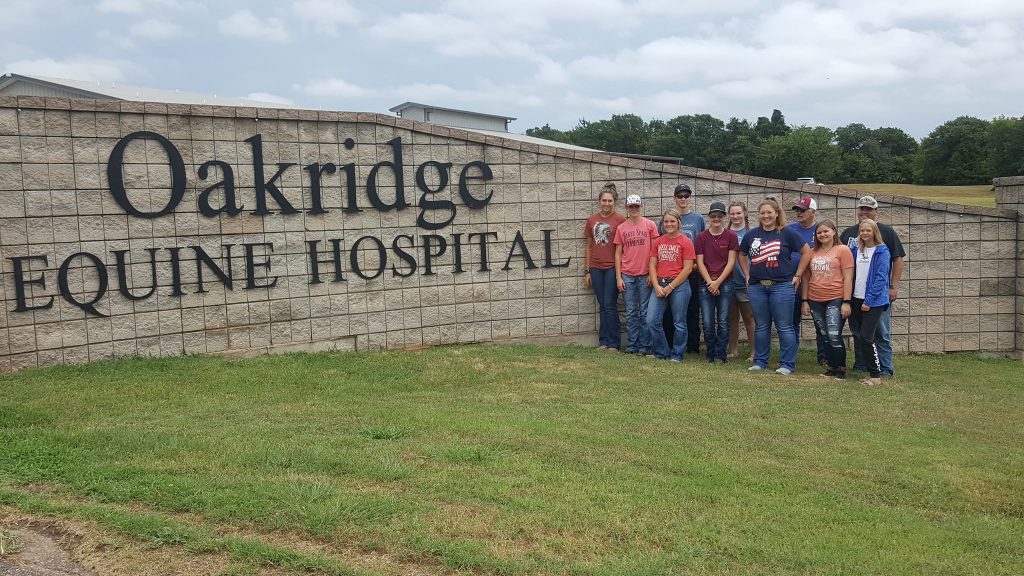 The FFA Booster Club was once again host to the Second Annual Ag Industry trip for Ava FFA students, and this year the focus was on the horse industry, with Oklahoma as the destination.

Planned in advance, the tours and hands-on visits were facilitated and organized by Booster Club members, Dwain and Jan Turner, and Michell King.

The first stop for the group was Edmond, Oklahoma where students had the opportunity to tour the Oakridge Equine Hospital.  During their visit to the facility, students were allowed to walk through the state of the art clinic via a tour led by one of the veterinarians and a vet intern.  Students learned about triage, surgery procedures, handling and sedation of equine, along with certification, education requirements and numerous job opportunities within the field.

Following the tour, several FFA students expressed interest in pursuing the hospital’s intern program, which is offered in the summer.

Leaving the clinic, the group traveled to Yukon, Oklahoma where Dane Bouvard, an Ava graduate and former FFA member, gave the group an in-depth tour of the Precision Percheron facility.  Both Dane and his brother Garrett work for Express Ranch and head up the Percheron program.

Students were allowed to get up close with one of the ‘wheel’ horses standing 19 hands tall.  They also learned about grooming, shoeing, handling, feeding, transporting, and many other important aspects of the field.

Dane also provided information about job possibilities at the ranch, internships, and the best steps and process for accomplishing goals in the field.

From Yukon, the group traveled to Ardmore, Oklahoma, and the first day there began with an 8:00 a.m. appointment at Troop Quarter Horses, a large breeding / training facility, and vet clinic.

Students were able to watch a training session with renowned trainer Clayton Anderson.

Anderson also demonstrated and discussed training methods, shoes, tack and care of this type of performance horse.   Anderson, an Australian-American natural horsemanship practitioner, is well-respected for his training program called Downunder Horsemanship. His methods have been featured in a number of magazines, as well as in his book which details the methods.  Anderson tours the United States as a clinician, and has appeared on television.

During the tour, students saw  the genetic clone of ‘Smart Lil Lena’ and several reining horses deemed the best in today’s industry.

In addition, the Troop Vet Clinic showcased their Mobile Salt Water Spa which the facility designed and built for horses.  The mobile unit travels throughout the United States to assist and aid owners of horses  competing in large-scale, national events.  The salt water spa is built to accommodate a horse for a 30 minute soak, in a 32º salt water bath.

Students walked through the mobile spa just prior to its departure for an event in Houston, Texas.

A tour of the breeding clinic walked the group through breeding process, which explained the initial step of collection and handling, AI, embryo transfer, ultrasound technology and mare care.

In Ardmore, Okla., the group toured the Oklahoma State Horseshoeing School, a facility that focuses on training individuals in the art and science of serving as a farrier and/or blacksmith.  Family owned and operated since 1975, the school offers horseshoeing classes every eight weeks.

During their visit, Ava students participated in hands-on training classes with horse cadaver legs and hooves.  Students learned about the structure of a horse’s leg and importance of hooves. 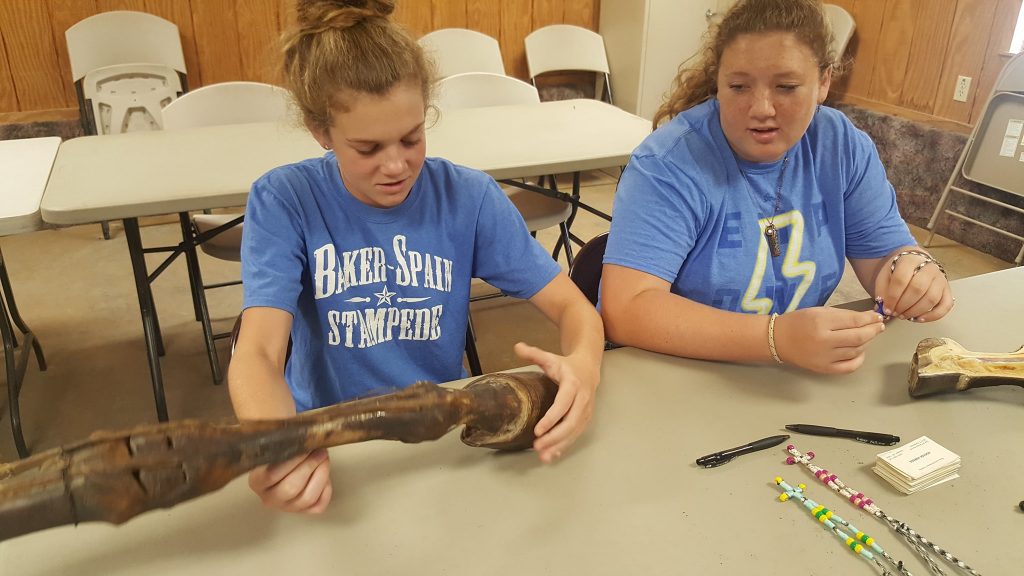 While on tour at the Oklahoma State Horseshoeing School, Celia Fossett, left, and Lauren King, right, are shown above holding a horse cadaver leg, as they learn more about the structure of the leg and the importance of hooves.

Due to the volume of hands-on horseshoeing instruction done at the school, the facility has a ‘horseshoe pit’ measuring approximately 5-ft. deep and 20-ft. wide, and the hole is filled with used horseshoes over  7-ft. tall.  According to the students, it was quite an impressive sight.

In the afternoon, students had the opportunity to tour the inside of the Bluebonnett Performance Horse Feed Mill.

During the visit, mill managers walked students through the entire process of feed production from unloading trucks to bagging.  The group was given instructions on how mathematics is used in the formula mixing of feeds, and how technology is integral to the process.  The whole process from beginning to end is monitored at the main office.

Students also participated in a horse feed ‘taste test’, upon which they gave approval.

On the final day of the trip, students visited the Hardy Murphy Coliseum  where they enjoyed watching a cutting horse competition before heading back to Oklahoma City to tour the National Cowboy & Western Heritage Museum.   At the museum, students took a guided tour of the Indian Heritage section, and the Cowboy, Rodeo and Western Art wing.

The group returned to Ava late that night.

Ag industry trips are organized and sponsored by the local FFA Booster Club.  This is the second year an agricultural tour has been offered.