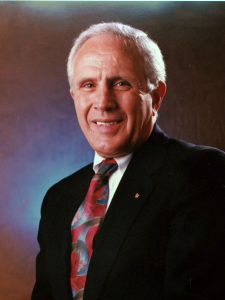 A Google map of Thomas Kellogg’s life would start in Ava, run through Springfield, head up to Michigan, loop back to Chicago, dip through New York, and end up in Connecticut.

Picked up on the route would be three college degrees, a wife, two children, a successful career, and two retirements.

Kellogg says his Ava upbringing played a large part in his success.

“Growing up in Ava gave me the chance to grow strong roots before getting distracted with everything the world can offer,” Kellogg says. “I was able to understand myself before getting caught up in too much.”

Thomas Kellogg was born a few miles outside of town, but his family moved into town shortly thereafter.

“I was an industrious young kid with lots going on,” he says. “We mostly entertained ourselves. We played school, house, and cowboys and Indians. Or games like hopscotch and marbles.”

His parents were industrious as well. Kellogg recalls a feed business, a grocery store on the square, and his mother teaching school in the country.

While Kellogg does admit to wishing he’d been a better high school student, he says Una Ellison teaching American History was his favorite. “I also liked all my athletic coaches,” he says.

In addition to school, Kellogg began working at a young age. “I delivered groceries around town for my parents store, and I also worked at the Kraft cheese plant.”

About the time Kellogg graduated from Ava High School and decided to attend Drury University, Kraft moved its plant from Ava to Springfield. “It was lucky for me,” he says. “I was able to keep my job. I ended up working for Kraft for 7 years.”

Along with his job, Kellogg kept the same “less than stellar” study habits he’d developed at Ava High School.

“I joined a fraternity while at Drury,” Thomas says. “I don’t know what I would have done if not for that. The fraternity assigned Paul Smith, another Ava graduate, to keep track of me and help me learn to study better. I learned that it was rewarding to be a high achiever. It opened more doors for me.”

Another eye-opener for Thomas was some family travel. “Growing up in Ava, a trip to Springfield was a big deal,” Kellogg jokes. “But later I took a trip with my parents up to Illinois, then to Michigan and Detroit. We also took a trip out west, to Colorado, Utah, Washington and the Dakotas. Those experiences showed me there was a bigger world out there.”

Thomas choose one of those states to pursue his next degree. “The best offer I got for grad school was from Michigan State University,” he says. “I went there for an economics degree. It was definitely a shock going from a small college to a big university.”

Now married, Kellogg decided it was time to re-enter the workforce. “I got two or three job offers while in grad school,” he says. ‘One was for the Labor Relations Board, and I wasn’t sure I wanted to work for government. The insurance business turned out to be the best offer. They even offered to help me get a law degree.”

Kellogg took the job, and the company located him in the branch that had the best night school options – Chicago. He worked there until receiving a Juris Doctor degree from DePaul University.

Kellogg continued in the insurance business, making a career of it. His specialty was re-insurance (insurance for insurance companies.)

When Thomas Kellogg retired in 2010 (for the second time), he was president of the largest reinsurance firm in America.

“I’m not as mobile as I used to be,” he chuckles. “But I still do a little gardening, tending to some properties, and keeping up with our two boys.”

He lives in Connecticut now, but has been back to Ava several times over the years.

“I’m a Trustee with Drury University now,” he says. “That work brings us back to the area occasionally. We catch up on the friends and family we still have in the area, and we like to attend Ava General Baptist Church. My parents and grandparents all went there.”

Kellogg said Ava had a few surprises for him when he returned.

“I didn’t expect all the development west of town,” he says. “Like the pool, airfield, and sports complex. I was also sad over the condition of the square.”

But he still feels Ava is a good place to be from. “I think kids can benefit from Ava & Douglas County today,” he says. “The area still has humanity, attention and feedback. Kids can develop at a slower place, before they rush off into the busy world.”