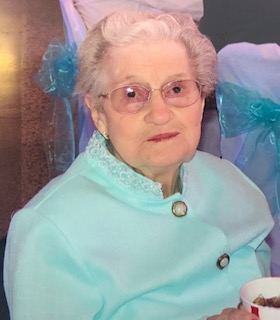 Jewell married Elmer Smith on January 8, 1940.  The couple had three sons, Charles, Jerry, and an infant son that died shortly after birth.

In 1956 they moved to John Day Oregon where Jewell worked as a CNA for many years at Blue Mountain Hospital.  She was really proud when her job title was changed from Nurses Aide to Certified Nursing Assistant.

In 1980, upon Elmer’s retirement, they moved back to Missouri and lived in Seymour where Jewell enjoyed needlework and crafts.  She spent many hours taking donations for a city library which was built in the mid-eighties.  She was an avid reader until her eyesight failed.

In 2006, Jewell moved to Great Falls and took up residence at Eagles Manor where she lived until health problems dictated her move to Benefis Eastview Nursing Home.

Jewell was preceded in death by her husband Elmer and an infant son.

Interment will be determined at a later date.