John and Patty Potts, owners of Longdollar Furniture & Appliance just north of the Ava square, on Jefferson Street, have purchased the Lou’s Lounge building and will eventually expand their existing business to also include that adjoining building. Lou Enfield, owner and operator of Lou’s Lounge for some 18 years, is retiring.

Roy and Glenda (Walker) Lee, Drury, will be observing their 40th wedding anniversary on Sunday, July 10.

Tom Vinson nailed down the final shingle last Friday to complete the roof on the Douglas County Museum.

The Leland Haliburton Memorial Fund was awarded to Jason Mayberry, of Ava High School, this year.  Jason is the son of Eddie and Lola Mayberry, of Wasola.

Central Methodist College has announced that Sarah Silvey, daughter of Mr. and Mrs. Larry Silvey, Ava, is included on the college’s dean’s list for work completed the second semester of the 1993-94 academic year.  Sarah, a freshman nursing major, attained a 4.0 grade point average during the second semester.

“Lucky,” a solid black German shepherd, and his handler, Trooper Steve Grass, will soon be patrolling the highways in Troop G, the first Highway Patrol K-9 team to be assigned to this south-central Missouri troop.

Shalana Fleetwood, 17, daughter of David and Shirley Fleetwood, of Ava, attended Missouri Girls State which was held June 19-25 on the campus of William Woods University, Fulton.

The Ava Municipal Airport which is under construction got its first use by aircraft Saturday afternoon when a severe thunderstorm moved into the area.  A young pilot and his family of Eau Gallie, Fla., set their single-engine Piper Commanche 250 down on the recently graveled air strip about 1:30 p.m. when he ran into bad weather and spotted the landing field.  Although the airfield is still under construction, William Hicks, Jr., an electrical engineer, about 35, pilot of the aircraft, set the plane down on the field without incident.

Theo McCall, a native of Ava, who has been employed by the Carp’s Department Store chain for the past 15 years, has purchased an interest in the Ava Furniture Company, owned by Mr. and Mrs. E.L. Hesterlee, it was announced this week by Mr. Hesterlee.

Charles Farris today announced his resignation as postmaster to become effective as soon as arrangements are completed by the Post Office Department for a replacement.

Mr. and Mrs. Harold Stott have sold the lease on the Aid-Hodgson water mill near Gainesville to a Kansas City couple, Mr. and Mrs. Kenneth Harrington, Sr.

Mrs. Blanche Irwin returned to her home on Saturday following a one-week visit in Rolla with her son, Mr. and Mrs. Charley Irwin and daughter, Jill.

Twenty-one Boy Scouts from Ava’s Troop 68, accompanied by Scoutmaster George Mold and Assistant Scoutmaster Marvin Emerson, arrived back in Ava Sunday after spending a week at Camp Arrowhead near Marshfield.

Murray’s T.V. with the help of Paul Warden at shortstop won a twin-bill at Gainesville Tuesday night. Murray’s T.V. collected 23 hits in the first game for a 15 to 4 victory. In the second game, Murray’s had 20 hits for a 16-5 win, boosting their record to 9-0 for the season.

The children of Rev. and Mrs. Oliver Letterman will conduct a 50th wedding anniversary celebration for their parents on Saturday, July 5, from 1:30 to 4 p.m. at the Willow Springs Baptist Church.

GENTRYVILLE –– Mr. and Mrs. John Dickison and Brenda of Ava spent Sunday with Mr. and Mrs. Dennis Driskell and Pamela.

Mr. and Mrs. Charles Turner are the parents of a son born Tuesday morning, June 17.

Two Ava boys who attended Boys State last week on the campus of the School for the Deaf at Fulton reported on their experiences there at the noon luncheon meeting of the Lions Club Friday. The boys are John Francis Atteberry, son of O.A. Atteberry of Ava, and William Beushausen, son of Otto Beushausen, of Route 2.

Sale of the Douglas  County Abstract Company by the J.H. Sell estate to Ramey Smith was announced this week. The new owner took over the business Saturday.  Mr. Smith announced that it was his intention to keep the business going for the duration of the war.  L.E. Reynolds, Jr., who has been managing the business, retained an option on a portion of it, and expects to return to it after the war.

DRURY –– Mrs. Harry Shannon received a package last week from Private Lyle Shannon who is stationed in Italy. The package contained necklaces that came from Jerusalem given Lyle by his chaplain, and he sent lava from Mt. Vesuvius. 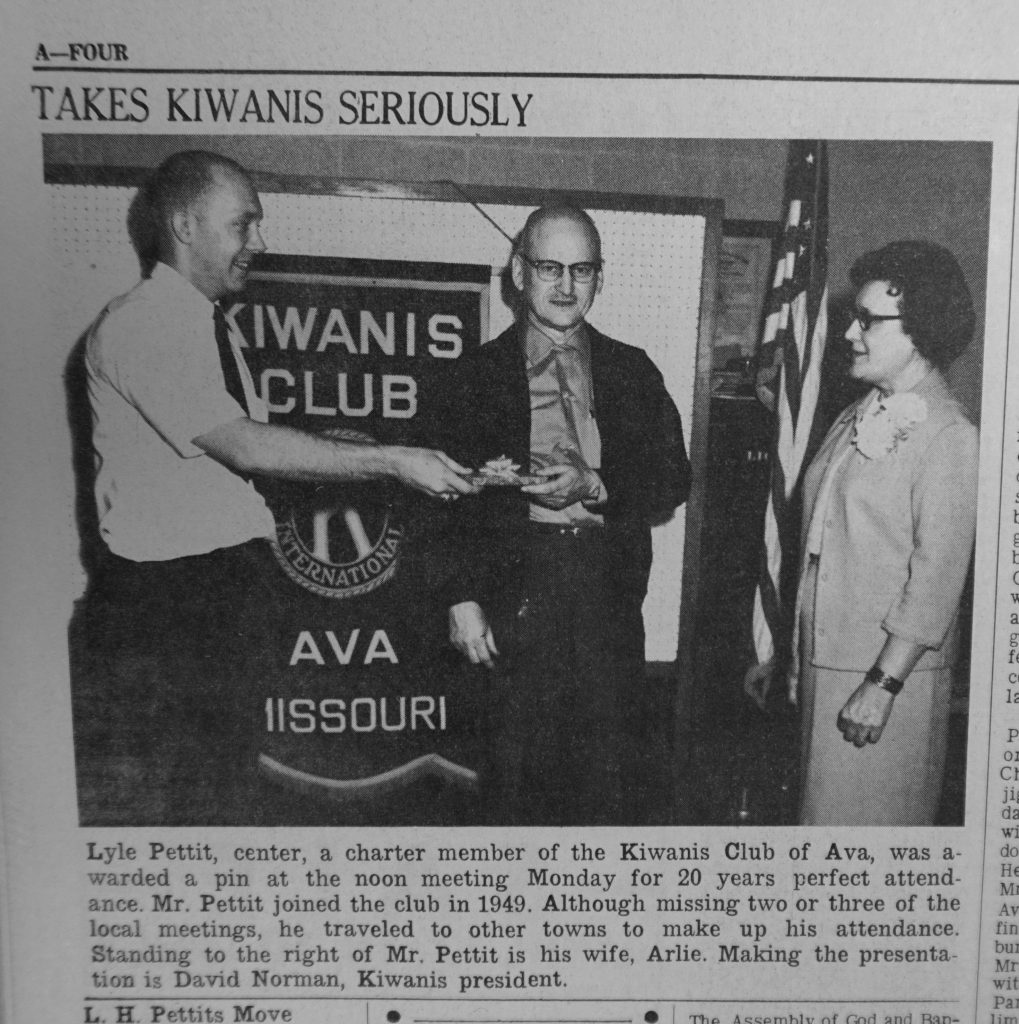 Harold Bell Wright passed away in May.

15th Army Air Force –– Carl H. Parsley, 23, a member of the mess section of a B-17 Flying Fortress group operating from an advanced base in Italy, has been promoted to the grade of sergeant. Sergeant Parsley is the son of Mr. and Mrs. Ed Pendergrass.

Corporal Russell Klineline who is stationed in La Junta, Colorado, arrived in Ava Saturday and is spending his 19 day furlough here with Mrs. Klineline and their daughter, Jacqueline Eve, and with his mother, Mrs. Abbie Klineline.

Mrs. Susie Plaster of Almartha received a letter from her son, Leo Fox, saying he expected to get a furlough soon. He has been across for three and a half years. He attended school in Ava.

A birthday party was given on June 29 at the home of Mr. and Mrs. Virgil Stillings in honor of their daughter, Miss Jo Ann Stillings who was celebrating her 12th birthday. There were ten guests, Dorothy June, Glenda Pearl, Marie, Melverine, Jeanette, Norma Lee Stillings and Noell Huffman and Mrs. Nora Stillings and son, Tony Dale. 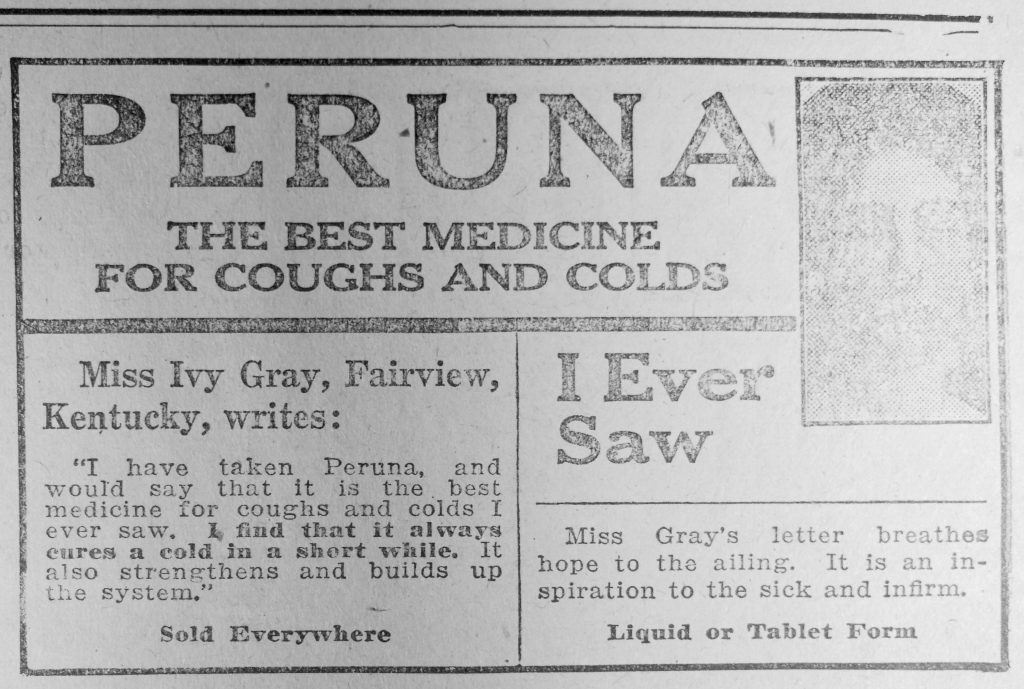 A farewell tribute to John Barleycorn was appended to a quart bottle and overhung with black crepe at the courthouse steps in Ava on Tuesday morning of this week following the wartime prohibition measure which took effect at midnight on June 30.  A copy of the transcript was also posted at the Ava Post office. The tribute reads as follows:  “John Barleycorn – Born 2382 B.C., Died June 30, 1919, 12:00 p.m.  Death came peacefully after a lingering illness for some time with a complication of diseases known as Local Option, Anti-Saloon League and Prohibition.  Death had been forecasted and was expected, so most all members of the family and friends were at the bedside at the last hour. Deceased was one of the oldest members of the Corn and Rye family and leaves many friends and relatives to mourn his loss, but his death is our gain.  Gone, but not forgotten.”

Final arrangements have been made in Ava for the big celebration July Fourth, and a record crowd is expected to pour into Ava early on the morning of the Fourth from all parts of Douglas and adjoining counties.  Another letter from Scott Field, Illinois, to Mayor Thompson this week gives further assurance that the government airplane will be in Ava on the morning of the celebration.

Serious injury was narrowly averted in an accident at the first crossing out of Mansfield of the Ozark Southern Railway when the “Yellow Jacket,” the Railroad motor coach, crashed into an automobile occupied by Mr. and Mrs. John Rawson of Ava, on Tuesday of this week. Mr. and Mrs. Rawson were on the way to Norwood in their Dodge car and did not observe the approaching danger.  The “Yellow Jacket” was on the way to Ava when the accident occurred.  No one was hurt, but the automobile was badly damaged.

The end of the 3-cent letter and 2-cent postal card was witnessed on July 1.  The increase in postal rates which became effective Nov. 2, 1917, as a war revenue measure has been abolished and the former rates of two cents for letters and one cent for postal cards is now effective.

A rat killing contest inaugurated by the Howell County Farm Bureau and carried on throughout Howell County in the rural schools resulted in ridding the county of 3,897 rats and 12,610 mice.  Prizes were awarded to the schools killing the largest number of rodents last week.

Bloodshed in Chicago – July 7 – Six dead and an indefinite number of injured is the record of casualties in the strike conflicts in Chicago Friday.

Bloodshed at Hammond – Chicago – July 9 –– The rioting at Hammond culminated yesterday afternoon in a conflict between the mob and Company B, Fifteenth United States Infantry.

Chicago practically under martial law.  President Cleveland is calling upon all lawless assemblages to disperse.  Peaceable citizens admonished to remain at their abodes.

A new remedy for diphtheria is being tried with success in New Zealand.  It is very simple.  Put five drops of sulphuric acid in a tumbler so the child can swallow it.  If the throat is obstructed give it with a teaspoon until the passage is cleared, then administer a wine glass every two hours.  Burn sulphur in the room as strong as it can be borne.

In Stone County it is said that nobody dies.  If it were not for people coming into the world the doctors would starve.

A young man named Justice has graduated from the state reform school into the penitentiary.

Wiley Waitley of Findley Township was tried before Esquire Bain of Bryant on Monday on a charge of an assault on Miss Nora Dyer of Clay Township. The jury found him guilty and assessed his punishment at 50 days in jail. E.H. Farnsworth representing the state and A.H. Buchanan and E.P. Blair were counsel for the defendant.

Jacob Wimmer was tried in Squire Sander’s court on Tuesday on a charge of displaying a pistol in an angry and threatening manner in the presence of J.D. Andrews.  The case was tried by a jury who found the defendant guilty and assessed punishment at a fine of $50 and costs. The defendant was represented by Rye Burkhead and Pros. Atty. Farrow was for the state.

H.M. Miller has his new residence on the south side nearly completed.

The Ava Brick yards in charge of S. S. Kirkham will soon be runnin with a full force of hands.  Mr. Kirkham has contracted to supply the brick for several new buildings in Ava.

Ava’s Fourth of July Celebration was a grand success. It was attended by 2500 people.  One of the most attractive features of the day was the parade of 44 young ladies representing the states.

On Monday evening, Arther Large and Adock Anderson of Granada in Findley Township engaged in an altercation which resulted in the fatal shooting of Large by Anderson.

It does no good to pick the winner after the race is over.

The ship channel from the Gulf of Mexico to the city of Mobile is soon to be lighted by electricity.  The plant will be the largest so far used for a similar purpose.  The channel is 30 miles long, and the alternating current system has been adopted.