Dr. Robert Rathun, principal here for the past four years, resigned to accept an administrative position with the Hutchinson, Kansas, school system.

Earlier this spring Misty Howard received the Silver Award, the highest award to be earned in Cadet Girl Scouting. Misty is currently working on the gold award, which can only be earned by girls in grades 10-12 and is the highest honor to be received in Girl Scouts. Misty’s Scout leader is Leslie DePoortere, and her mother is Marie (Mrs. Billy) Howard.

Roy and Lola (Pruett) Gray, Chadwick, will be observing their 65th wedding anniversary on Sunday, June 26.

Lonnie Smith, of Ava, is a veteran fisherman and has landed just about every species to be caught in Missouri waters. That’s why he was dumbfounded when he pulled an oddity from the waters of the Osage River below the Bagnell Dam this week.  Smith’s search took him to the Missouri Department of Conservation where he learned the fish is a largemouth carp, an Asian fish which is not normally found in this country.   It seems the fish escaped from the pond of a fish farmer near the river when the area flooded, and found its way to the waters of the Osage.

Juanita Herrell, owner of TempForce of Moline, Illinois, was presented with both a Gold Star Award for sales excellence and a Roger G. Showers Memorial Award at the TempForce National Convention held at the Hilton in Walt Disney World Village on May 11 through 14. 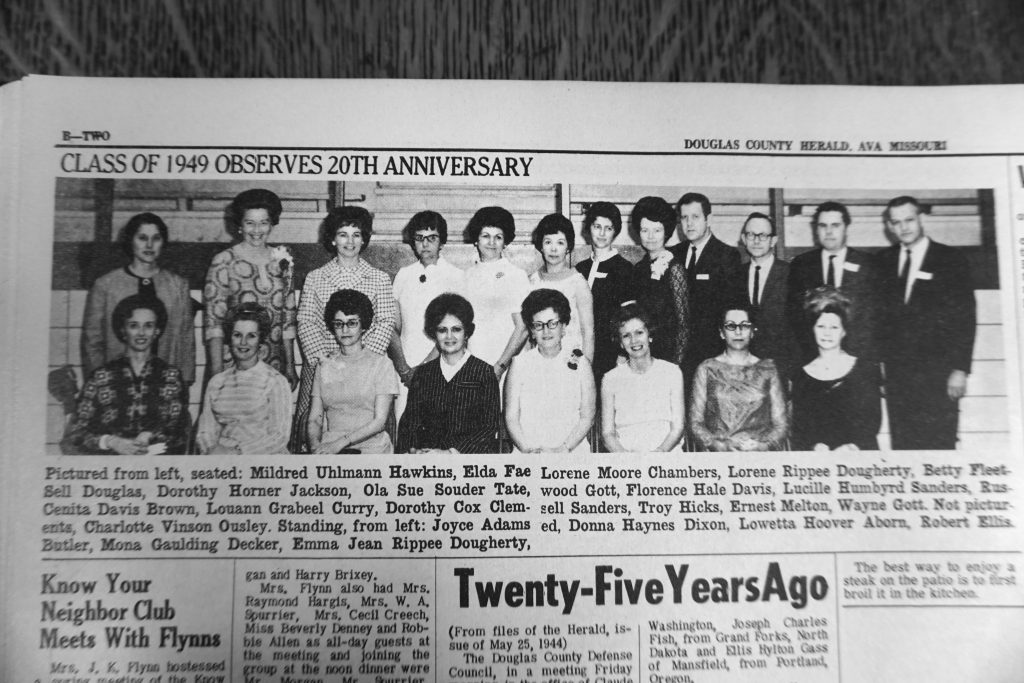 The long-standing tradition of funeral home-operated ambulance service has reached the beginning of the end in Southwest Missouri.  Funeral directors representing five area counties and 11 towns including Ava, in a meeting at Mountain Grove Tuesday evening, voted to discontinue ambulance service on Dec. 31 because of prohibitive costs in complying with new federal regulations regarding ambulance personnel and vehicles.

Mrs. Ardell Flattem of Route 3, Ava, has been appointed assistant administrator of Chastain’s of Ava, it was announced this week by J.D. Chastain of St. Louis, owner.

Federal Judge William R. Collinson Monday refused to suppress as evidence in a criminal case a time bomb found by two highway patrolmen in a car at Ava, according to the Springfield Daily News.

An explosion and fire about 4:30 p.m. Monday resulted in injury to two persons, the destruction of a local residence housing five elderly persons and loss of their personal belongings.  Injured were John Rhodes, who was admitted to the Mansfield Hospital, with burns over his face and arms, and Joe Hibbler who suffered burns on both arms, but was not hospitalized.  Other residents of the home, John Gray, Mrs. Lydia Wheeler and her son, Ray Wheeler, were uninjured.  A leak in the gas line at a residence one block south of the square was apparently ignited by a pilot light causing the explosion which shattered the walls of the dwelling and engulfed the home in flames, according to Fire Chief Leo Lisby.

Sandra Welch, daughter of Mr. and Mrs. Curby Welch, Route 1, has been accepted for enrollment at Evangel College for the fall semester of 1969.

Mr. and Mrs. Gene Riggs and daughters, Carol and Sandy, returned home Sunday from a vacation in Florida.

What many of today’s young women need is a good, long look at themselves in a full-length mirror.

Dangerous Chemical, Cannibals Beware, Human beings are unsafe to eat.  The federal Food and Drug Administration has set five parts per million of the pesticide DDT as the maximum allowable in fish sold commercially.  Yet the average human has some 12 parts per million in his body.  Laboratory experiments indicate that the pesticide can nullify the beneficial effects of antibiotics, incite cancer, and affect sex hormones, in larger doses, the central nervous system can be damaged. 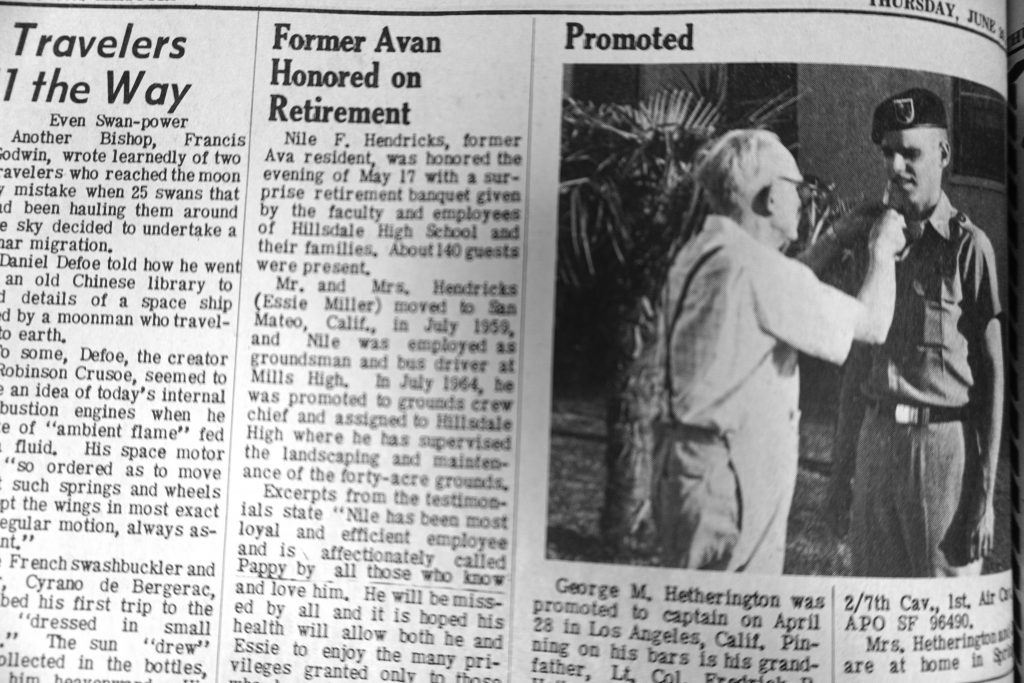 Captain William J. Hosmer successfully took off from a hay field on the Henry Melton farm half a mile west of Goodhope Saturday afternoon after a repair crew from his base at Victoria, Kansas had repaired a broken oil line that forced him to land there Wednesday afternoon late.  Captain Hosmer was flying an A-24 dive bomber from Memphis to Walker Army Air Base at Victoria, Kansas, where he is stationed, when he was forced down. He estimated that he could have stayed in flight only about three minutes longer without fire starting in the motor.

From Pearl Harbor it was announced Thursday last week that United States assault troops attempting to wrest Saipan Island from the fierce resisting Japanese had secured beachheads and were advancing inland against well organized defenses.

Mr. and Mrs. Voyne Clinkingbeard announce the birth of a son, Kenneth Ray, on Thursday, June 15, in the family home on Madison Street.

Neighbors of the Denlow community held a surprise dinner Sunday in honor of the 50th wedding anniversary of Mr. and Mrs. Elmer Derrickson and Mrs. Derrickson’s 69th birthday.

Mr. and Mrs. Cecil Harley and son, Jerry Lee, left Ava Sunday enroute to Rockaway Beach where they are spending this week enjoying the vacation sports at Lake Taneycomo.

BUCKHART –– Miss Vivian Uhlman, who is attending STC was home over the weekend visiting her parents, Mr. and Mrs. Richard Uhlman.

Mrs. R.L. Story who is now employed in the Ellis store visited from Saturday until Monday in the country home of Mr. and Mrs. J.W. Slate who live near Vera Cruz.

Mr. and Mrs. Landon Gaulding were in Nottinghill Sunday and attended a reunion of the Gardner families who were being entertained in the home of Mrs. T.P. Gardner and her son, Glen.  Dinner was served at noon and covers were laid for the 25 persons present.

Miss Marjorie Reynolds received a B.S. degree from the University of Missouri in Columbia in graduation ceremonies Friday. Her parents, Mr. and Mrs. O. C. Reynolds, were present at her graduation and she returned to Ava with them.  Recently she was elected president of her sorority, Gamma Phi Beta, and will serve in that capacity next year.

The first non-stop flight across the Atlantic was accomplished by a British bi-plane on June 15. The biplane was driven by Captain John Alcock accompanied by Arther W. Brown, navigator.  The flight was made from Newfoundland to Ireland in 16 hours and 12 minutes, or at an average rate of 122 1/2 miles per hour.  Alcock and Brown will receive the $50,000 prize offered by the London Daily Mail for the first nonstop flight across the ocean.

The first woman to be convicted of murder in the Ozarks resulted at Eminence, Shannon County, last week when Mrs. Carrie Hofland was given a sentence of 10 years in the Missouri penitentiary for the murder of Mrs. Pearl Welton.  The murder occurred at the Welton home in Shannon County near the Howell County line, and near Terisita.  Mrs. Hofland admitted having choked Mrs. Welton to death and to throwing the body into a cistern. She then dropped the five-months-old baby of Mrs. Welton into the cistern, according to her own story.  Frank Welton, the husband, claims to have been working in the timber some distance from the home; but arrived on the scene in time to rescue the baby from the cistern.  Mrs. Hofland claims to be the common law wife of Frank Welton and claims to have lived with him for 13 years in Nebraska.

What is pronounced the largest land sale ever made in the state and one of the largest ever made in the middle west has been closed in West Eminence, Mo.  The deal involved 69,000 acres of southwest Missouri timber land and is said to have necessitated an outlay of close to $1,000,000.  The land was purchased from the Current River Land and Cattle Company by a Minneapolis syndicate.  The new owners of the Shannon Co. land will provide and operate sawmills by which millions of feet of hardwood timber will be made ready for the market.

The L.H. Pettit building on the north side of the square, now occupied by the Chas. Moohouse barber shop, was sold this week to H. M. Curnutt.

Experts found 45,653 men in the United States Army, who though men in status, had the brains of children, their mental age being under 10 years. A few had the minds of a child under age 4.  As with most of our social evils, the trait leads back to booze. The chief cause of a moron class in this country is drunken fathers.

Missouri will have a great many apples after all.

There is talk of damming the Osage River at Osceola.

As detectives, blood hounds are not a thrilling success in Missouri.

A Springfield school teacher is accused of the awful crime of flirting.

Twenty-three rats is considered a fair night’s catch in the Ray County Jail.

An auditorium is to be constructed in the great Marble Cave in Stone County.

Attendance on Sunday religious services is no longer compulsory in the Missouri penitentiary.

There are 57 women among the 2,000 prisoners of the Missouri penitentiary. Seventeen of them are white.

Arrangements have been made for the surrender of Bill Doolin, outlaw, to United States Marshal Nix of Oklahoma.

Last Saturday, a couple of young folks went to Rolla to get married, but after reaching town some disagreement sprang up between the two and the ceremony was not performed.  They left for their homes about four-o’clock, and an hour later, they were found two miles west of Rolla, both dead.  It is supposed the young man shot the girl, and then killed himself.

Prosecuting Atty. E. H. Farnsworth and A. B. Buchanan went to Lincoln Township on Saturday to attend the trial of Mr. Tuttle, charged with assault with intent to kill.  The defendant was bound over to await the action of the Grand Jury at September’s term of Circuit Court.

A. Burkhead went to Mansfield on Monday where he expects to meet his daughters, Misses Myrtle and Jesse, who are coming to Ava to spend their vacation.

Consolation for Fat People –– A physician points out that fat people endure most kinds of illness much better than thin people, because they have an extra amount of nutriment stored away in their tissues to support them during the ordeal.  Moreover, there are many other consolations to persons of abundant girth. They are generally optimists by nature, genial and jolly companions whose society is universally preferred to that of people with angular frames and dispositions.

Yet another occupation has been found for women –– that of acting as barometers.  Weather Prophet Dunn is quoted as saying that one of the ways of telling whether the temperature was rising was to watch a girl’s front hair.  When it began to lose its curl and grown straight, it would be a sure sign of change of temperature.

The exposure of municipal corruption in New York by an investigating committee of the state senate, fully justifies all the charges that have been made in that relation.

The ice dealers of Topeka have formed a “trust” increasing the price of ice nearly 100 percent over that of last year.