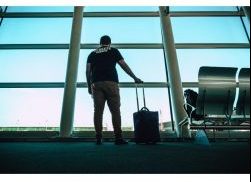 The busy summer travel season is here and the Springfield airport encourages flyers to arrive at the airport at least two hours before their flight’s scheduled leave time.

The airline lobbying organization, Airlines for America, expects more than 257-million passengers will travel on U.S. airlines between June 1 and the end of August. It’s part of a continuing trend of robust growth in the airline business. In Springfield, for example, passenger numbers have grown 43% over the past five years. The end result is two-fold:

1. Airport parking lots are near capacity. It often takes longer to find a parking spot than it used to (the airport will expand the lots in the near future).

Here are some ways to avoid missing your flight —

First and foremost: arrive at the airport at least two hours before your flight is scheduled to leave.

Speed up the line at the security checkpoint by doing the following:

Other ways to speed things up:

Bottom line:  the summer travel season is here and long lines will be common. Don’t miss your flight; arrive at the airport at least two hours before your flight is scheduled to leave!