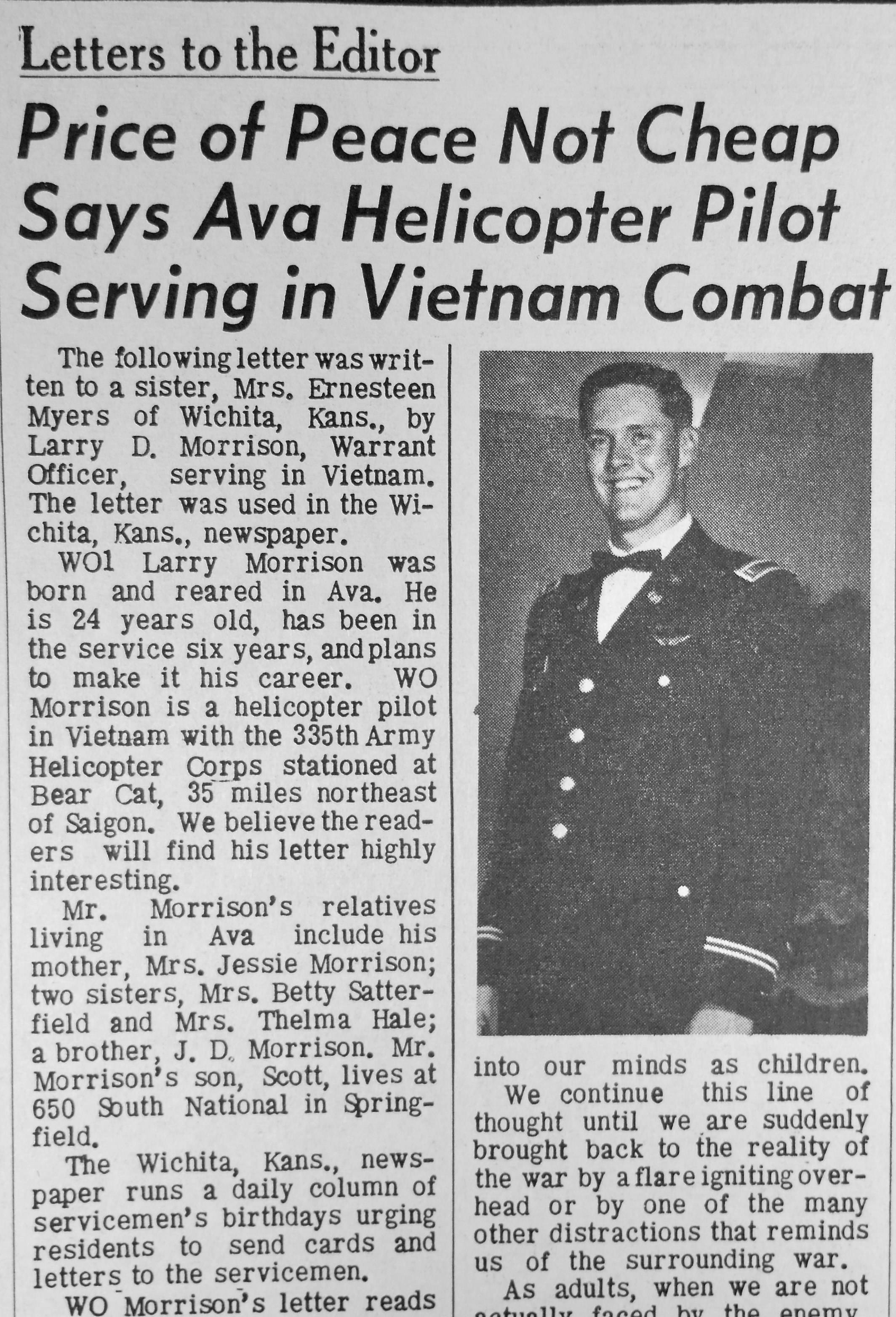 Mayor Bud Norman and wife, LaVerne, were named this year’s Lord and Lady Poke to reign over the 1994 Poke Salat Days celebration.

Only about 12 percent of the city’s registered voters went to the polls here on Tuesday, but those who did vote made a bold statement. A $2.3 million bond issue proposal that will allow the city to establish and operate its own natural gas system was approved by a 195-30 margin.

Lorene Heinlein, Expanded Foods and Nutrition Education Program secretary, won the top award May 25 in the Service and Support Category at the University of Missouri System Awards Ceremony in Columbia.

Shelly Phillips, of Ava, was on the honor roll at N.W. Missouri State for the 1994 spring semester.

Rev. Timothy P. Warren will assume his new duties as pastor of the First Southern Baptist Church of Ava on Sunday morning, June 12.

Mr. and Mrs. David Williams (Rhonda Swofford) are happy to announce the birth of a daughter, Haley Breann, born May 24 at 4:45 p.m.

Ava’s Jason Burton qualified for state in the 110 meter high hurdles this spring, and placed 8th in the state high school track meet in Jefferson City on May 30, with a time of 15.6 seconds.

It looks as if Highway Patrol Corporal Bill Davis’ “built-in radar” may be wasted talent as far as two men with a bomb in Douglas County are concerned.  Federal Judge William R. Collinson held a hearing Monday in a motion to suppress evidence in the cases against Alfred Harflinger, 41, St. Louis, and James William Nash, 41, North Liffle Rock, Arkansas, who were arrested in Ava February 22.  “Some officers,” said Judge Collinson, after hearing Bill Davis testify, “seem to have a built-in radar when it comes to men with criminal records, but that isn’t grounds for search and seizure. I have doubts about this case.”  The first witness at the hearing was Leslie Heriford, Route 2, Ava, who testified he was in his kitchen at 4:45 a.m. on February 22 fixing himself medicine when he saw a black-over-white 1967 Chevrolet leaving his yard. Heriford said he had been warned he had better watch his bulk tank.

Funeral services for SFC John Edward Ray, 36, a native of Wasola who was killed in Vietnam combat, were held at 10:30 a.m. Tuesday at the Oak Grove Church in Wasola.  Sgt. Ray, a 17-year veteran of the Army, had been in Vietnam nine months when he was killed near Chu Lai by small arms fire on May 13, according to the Defense Department.

Williams Super Market on the west side of the square has been purchased by Wayne and Millard Gott, owners of Town and Country Super Market, it was revealed this week. The name of the store, one of three markets left on the square, will be called Town and Country No. 2, the Gott brothers said. General manager will be Larry Johnson, and the store manager will be Doyne Upton.

Mrs. Gordon Shanks, of Route 5,  Ava, has purchased the Northside Cafe located on Ava’s Public Square, and plans to open the business on Saturday, May 31. The cafe, last owned by Mr. and Mrs. Jim Trent of Ava, has been closed two weeks while the building has been repaired and the interior has been painted and redecorated.

Betty Lou Curnutt, daughter of Mr. and Mrs. Fred Curnutt of Ava, was a recipient of the Bachelor of Arts degree in recent graduation exercises at Southwest Baptist College in Bolivar.

Miss Sally Galbraith, elementary librarian at Ava has been selected to participate in a Title II, Part B, Federal Library Institute at Central State College on the Edmond campus.

Mr. and Mrs. Herman Frye, Route 4, Ava, will celebrate their golden wedding anniversary June 1, with an open house.  They have 19 grandchildren and six great-grandchildren.

An outdoor girl is one that closes the bus window so that her hairdo will be just right for riding in an open convertible later in the day.

GENTRYVILLE –– Donnie Ousley and Steve Uhlmann are home after completing another semester at School of th Ozarks.

Court Settles C.E. Davis Case –– Mrs. Addie Davis was allowed $11,500 in a property settlement Thursday last week in her suit against her husband, C.E. Davis, Ava grocer, for separate maintenance and account of property.  Also in court, Wayne McCullough, former Ava night watchman charged on two counts of selling liquor without a permit, requested the court to set aside its order of May 10 changing the venue of the two cases against him.  McCullough pleaded guilty on one count, and the other charge was dismissed.  He was fined $100 and costs on the first count.

Allied troops moved across the English Channel from England to the Normandy coast of France early Tuesday as the invasion of continental Europe got under way.  British Prime Minister Winston Churchill asserted the invasion was proceeding in a “thoroughly satisfactory manner.”  United States, British and Canadian troops struck at a 100-mile coast line from L. Havre, at the mouth of the Seine River, to the city of Cherbourg on the Manche peninsula.  Weather on the channel was adverse, with a strong northeaster kicking up waves, but this was not permitted to halt the stream of reinforcements and supplies going across to the French coast.  The invasion was launched before dawn Tuesday under a screen of bombs and shells from 4,000 warships and 11,000 warplanes.

A cow and a stock dog were killed by lightning which narrowly missed Clarence Singleton early Monday morning. Mr. Singleton was standing only 17 steps from the cow and dog and was knocked down by the lightning. A bird dog with Mr. Singleton also escaped the bolt.

Captain Willard Pueppke, age 24, son of Edward G. Pueppke of Ava, has been promoted to his present grade from that of a first lieutenant by the 13th AAF with whom he is serving as a pilot of a Liberator bomber operating against Jap held installations and shipping in the South and Southwest Pacific. Captain Pueppke is a graduate of Plainview High School, Nebraska, and after entering service received his training at Scott Field Radio School, and at Maxwell Field, Alabama.

Mr. and Mrs. Glen Cline of Ava announce the marriage of their daughter, Marjorie, to Corporal Vance Roper, son of Mr. and Mrs. R.V. Roper, of Ava, Friday, June 2.

Miss Martha Jo Lethco returned to Ava Tuesday after spending a few days in Goodhope where she had visited with her aunt, Mrs. Rex Sawyer, Mr. Sawyer and family.

Mr. and Mrs. Sam Exline and daughter, Mary Ann, who have been living in Mountain Grove have returned to Ava to make their home.  Some weeks ago Mr. Exline sold his barber shop in Mountain Grove and is now barbering in the Haskins shop in Ava.

The $10,000 alienation suit brought by Geo. A. Veach against Dr. J.C. Ellis has been filed with the Greene County Circuit Court at Springfield on change of venue from Douglas County.  The plaintiff alleges that Ellis made love to his wife during his absence and that he induced her to leave him.  Ellis denies the allegations in his answer filed with the court, and further states that Veach was so vile and cruel to his wife that she was obliged to leave him.  The case was first up for trial at the January term of court here, but was continued at that time because of the absence of an important witness for the defense.  The Veach couple were married in 1906, and the acts complained of by the defendant are alleged to have taken place prior to May 1918.  Veach obtained a divorce upon cross-petition in proceeding started by his wife at a recent session of the Douglas County Circuit Court.

The oldest building on the campus of the University of Missouri, Law’s Observatory, is now being torn down to make room for the new building to be erected on the site for the School of Journalism.

The biggest saloon in the world went out of business Monday when Ohio became dry under an amendment to the state constitution.  It was located in this little city of Bridgeport, with 4,200 souls, just across the Ohio River from Wheeling, W.Va. The saloon employed 77 bartenders and clerks, and had 216 feet of bar.  For the past year or two its average daily bank deposits have been $5,000, or $1,600,000 a year.  The saloon made Bridgeport one of the show places of the Ohio Valley.

Cash Lawhead, for eight years clerk of the Howell County Circuit Court, was married last week to Miss Helen Angeline Hale, daughter of Mrs. Cora Haley, a widow who resides near Olden. The former county official is 42 years old while the bride, who is a mere child, gave her age as 14 years when the license was secured.

The heavy rains of the past few weeks and especially those of the first of this week have greatly damaged the wheat crop.

Bill Dalton, leader of the notorious gang, which it was believed at one time had been wiped out of existence during the bank robbery at Coffeyville in which Bob and Grattan Dalton were slain, was shot and instantly killed at a home in Ardmore, Oklahoma Territory, by Deputy United States Marshals.  The identification is complete.

At Eldorado, Kansas, the rain of Saturday night was the heaviest this county has had for 25 years, and as a consequence the entire Walnut Valley is entirely covered with water.

In Chicago, at a large gathering of the enemies of ice and particularly cigarettes, steps were taken for an organized fight against the papered weed.  As a result of the meeting the National Anti-Cigarette Association was formed, which was planned for a world wide institution.  It is formed under the auspices of the National Missionary Evangelical Association, and steps will at once be taken to spread the new society all over the country.

The Army worms and grass are running a lively race in Missouri.

GOODHOPE –– Thomas Harvey of Seymour, formerly of Kansas, has purchased a tract of land near the Owen’s place and expects to remain with us.

Ava will celebrate the Fourth of July in grand shape.

The Ava Cornet Band is making extensive preparations for the coming Fourth of July.  They have purchased new uniforms and are drilling daily, and will no doubt make a fine appearance at Ava’s celebration.

County Clerk Malloy and Will Miller are at work making the school tax book.

Ava’s champion checker players ran across a snag last week and discovered that they were mere novices in the playing of the game.  W.R. Allen of Sparta gave them a few lessons which resulted in a score of two to nothing in favor of Allen.

George Graham of Jackson Township is assisting county assessor Huffman in the assessment of Richland Township.

G.W. Johnson of Buchanan Township has been appointed deputy assessor for the township.  E.H. Farnsworth and A. Burkshead went to Clay Township on Tuesday.

Born to the wife of W.D. Hancock, a ten-pound girl on Sunday, June 10.

C. W. Spear who officiated as  foreman in the office of the Ozark County News during the past winter was in Ava on Monday on his way to Mansfield.

The total amount of criminal costs paid by the county court during the year ending May 1, 1891, amounted to $719,000 or about one-half as much as was expected under former administrations for the same period of time. Farnsworth is entitled to much credit for the economical administration of this department of the county expenses.