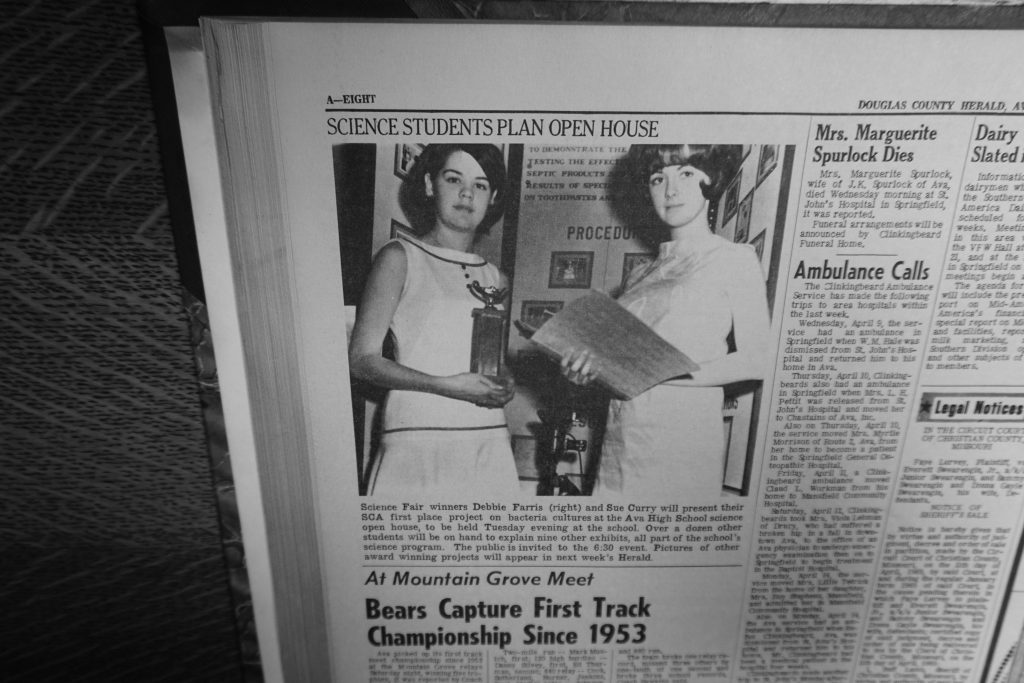 Science Fair winners Debbie Farris (left) and Sue Curry will present their SCA first place project on bacteria cultures at the Ava High School science open house, to be held Tuesday evening at the school.  Over a dozen other students will be on hand to explain nine other exhibits, all part of the school’s science program.

Voters of the City of Ava will go to the polls next Tuesday to determine if the city should issue revenue bonds for the purpose of construction of a natural gas system.

Mr. and Mrs. Merl Forrest, Ava, are proud to announce the engagement and forthcoming marriage of their daughter, Dana Lorraine, to Benjamin Lee Dry, son of Mr. and Mrs. Danny Dry, Squires. The wedding ceremony will take place Saturday, July 2, 2:00 p.m. at the First General Baptist Church of Ava.

The Norwood Bluegrass Jamboree will be starting June 11 at 7 o’clock, entertainers will be the Silas Johnston family.

ARNO –– Leon and Mary Eaves and family spent the weekend down on the lake.

Mr. and Mrs. Bill Baker, founders of the SMSU scholarship in recognition of the Ava High School Class of 1925, awarded the scholarship to Matt Collins, this year’s recipient.

On Sunday, May 15, Brenda K. Turner of Ava received an associate of science degree from Drury Collete.

Miss Richelle Pettit celebrated her first birthday with a party held at the home of her parents, Mr. and Mrs. Bruce Pettit and sister Kelsea on Saturday, May 21.  A parade of birthday bear decorations and cake greeted the honoree’s guests. 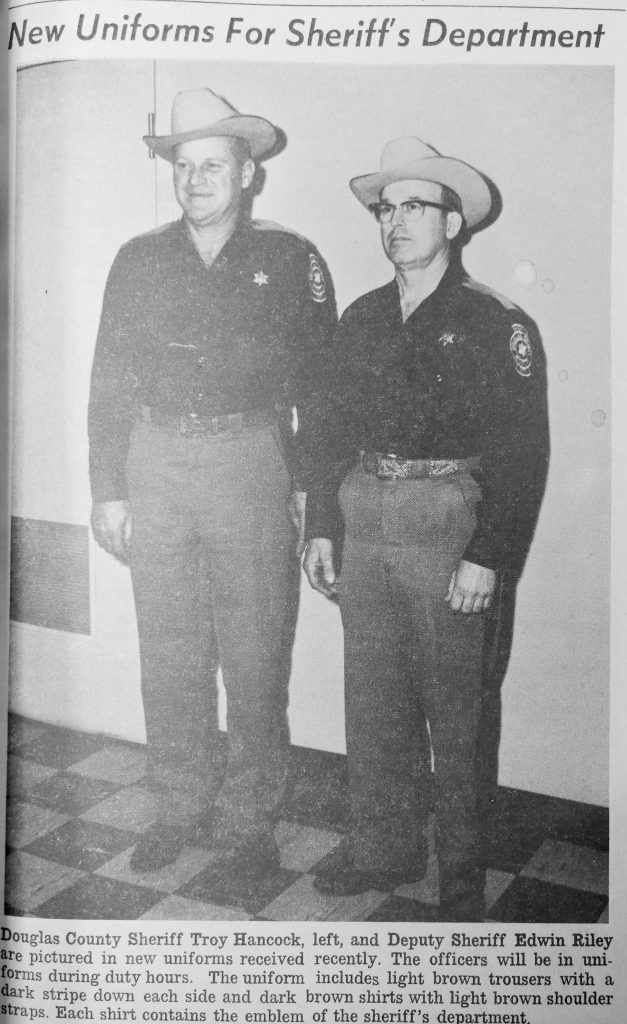 Almartha, the third post office established in Ozark County, closed last Friday, ending a total of 114 years service to the rural community.  It was the second postal facility in the county to suffer that fate within two weeks.  Almarth patrons will be serviced through Wasola.  Mrs. Ray Oxley has been serving as acting postmaster at Almartha since the resignation Jan 31 of Mrs. Genelle Gardner.  The office was opened in 1855 by Eli S. Forest, who named it by combining the first names of early settlers Albert and Martha McSpadden.

This year’s annual Ava High School Alumni Banquet attracted one of the largest attendances ever recorded with an estimated 375 persons present, according to Mrs. Faye Sims, president of the organization.  Ava High School students performing at the Alumni Banquet included a vocal solo by John Klineline, a piano solo by Sue Curry, and a cornet solo by Mark Musich.

Mr. and Mrs. Lee Russell received word through the American Red Cross that their son, Sgt. John Russell, had been released from a Vietnam hospital and had returned to duty.  Sgt. Russell received a number of shrapnel wounds while on duty at Phu Bia, Vietnam, on May 4, and had been moved from a hospital at the base to a hospital at Da Nang when his parents heard from him early last week.

Miss Marilyn Jennemann, a native of DeSoto, Mo., has accepted the  position of area home economist for the three county area of Douglas, Ozark and Wright Counties.

An Ava High School teacher will mark her 29th year of public school teaching Friday and retire from her profession as high school librarian.  Mrs. Minnie Dean, who began her career in 1929 teaching the first grade, spent her entire career in Douglas County.

Youthful vandals struck at the old high school building last Saturday night causing hundreds of dollars damage to the building in addition to destroying valuable art work of students, visual aids and teaching aids belonging to Mrs. Dorothy Williams, high school art teacher.  A faucet in the drivers education room on the second floor was turned on sometime Saturday  night and remained running until it was discovered about 7:15 a.m. Monday by a student employee, James Aborn. The water destroyed everything in the high school art room, damaged floors and caused the ceiling in the room to collapse as well as damage to ceilings in other rooms.

Dennis Ray Posey was honored at his home on Friday, May 16, with an early birthday and bunking party.   Games were played and birthday cake, ice cream and kool-aid were served. Party favors of suckers, bubble gum and balloons were presented.

E.C. Philpott, Douglas County farmer of the Dogwood community has been growing sheep for the past 18 years and finds that they are still profitable.  Mr. Philpott told County Agent Clyde Clubb that when he paid $35 per head for ewes and $45 for a ram 14 years ago some of his neighbors thought that perhaps he paid too high for them.  Mr. Philpott found that such was not the case for his sheep have always been in demand for breeding stock in the community and have commanded premium prices.

An “Appreciation Sale” featuring PurAsnow flour is being conducted Saturday by Fred O. Lethco.  More than 8,500 bags of PurAsnow have been sold in and around Ava during the past year, Mr. Lethco stated.  He first started selling that brand last June, and at his opening sale sold more than two tons.

Mr. and Mrs. Harold Hutchison announce the birth of a daughter, Mary Martha, Monday morning, May 29, in the family home just south of Ava.

Mr. and Mrs. Homer Harley entertained a group of Ava friends Sunday evening in compliment to Mr. and Mrs. Basil Spurlock who were recently married. The group met in the Harley home on Spring Street then went to Riverside near Ozark where a chicken dinner was served. Covers were laid for the honorees, Mr. and Mrs. Harlan House, Mrs. Wanda Williams and the host and hostess.

MT. TABOR –– Saturday morning Mr. and Mrs. Clifford Turner received the Purple Heart and certificate of award for their son, Lowell Ray Turner, seaman second class, who was reported missing in action in December 1942.  In December 1943 he was declared officially dead and May 10 the Purple Heart was inscribed and dated.  This is a beautiful emblem of honor and esteem that carries the reminder of the horrors of war to the loved ones wherever it goes.

The two sons of Mr. and Mrs. J. E. Curry are home on leaves this week.  they are Lieutenant (jg) Howard J. Curry, in the Naval Dental Corps at Solomons Island, Maryland, and Yeoman Second Class James E. Curry, stationed at the naval air station at Olathe, Kansas.

James E. Bramer charged with burning the Odd Fellow Hall at Dora was tried before Judge Fred Stewart at Gainesville last week. The trial resulted in a hung jury, the vote standing nine for acquittal and three for conviction. The evidence was wholly circumstantial.  Bramer was secretary of the Rebecca Lodge and was reputed to be short in his accounts, that being assigned as the motive for the alleged crime.  A safe in the lodge hall contained together with some other valuable papers about $200 in baby bonds that belonged to the lodge.  After the fire the safe was found to be open and evidently had been rifled.

The Atlantic Ocean has been crossed in an aerial passage, and the American Navy wins the honor.  the American naval seaplane N-C 4 accomplished the feat when it landed at Lisbon, Spain, on Tuesday of this week.  The N-C 4 was designed, built and manned by a crew of American.  Lieut. Commander A.C. Reed had charge. The flight was made in 26 hours, 41 minutes.  The U.S. seaplanes NC-1, NC-3 and NC-4 started from Rockaway Point, NY on May 8 on the preliminary leg of their across the Atlantic.

At a session of the city council of Ava on Wednesday night of this week it was unanimously decided to buy a chemical fire engine for the city.  H.C. Dudley, representing the H.W. Johns-Manville Co., of Prospect, Ohio, was present and was given an order for one 40 gallon Deluge Chemical Fire Engine to be shipped to the city immediately.  The chemicals contained in the tank are said to be equal in effect to 20,000 gallons of water.

The Kansas City, Ozarks and Southern Ry. operating between Ava and Mansfield is to be succeeded by the Ozark Southern Ry. Co.   Official notice of the change in name was received by C.O. Daves, agent at Ava, on Tuesday of this week. The company has been reorganized, the Quigley suit for possession of the road having been settled and the receiver dismissed.  Frank H. Braden of St. Louis, formerly receiver for the road, is president and general manager of the new company.  The other stockholders are Claud E. Vrooman and August Heiman both of St. Louis.

A mob of 140 persons raided the private office of Judge B.G. Thurman at Lamar on Wednesday afternoon of this week, took Jay Lunch, murderer of Sheriff Jno. M. Harlow and his son in a sensational jail break at Lamar in March, and hanged him.  Lynch had been brought quietly to Lamar Tuesday to stand trial for the double murder before Judge Thurman.  He had been held at the Bates County jail at Butler for safe keeping since being captured.  The news leaked out that Lunch was to be given a quiet trial shortly after noon Tuesday, and a mob met secretly and promised to avenge the death of Sheriff Harlow and his son.

A law passed by the last Missouri legislature requires a fishing license to fish outside one’s home county.  A one dollar license fee must be paid to do so in other counties.  The penalty for violation is a fine of from $25 to $100.

Joplin is going to have a linoleum factory.

Missouri has 553 Chinese subject to registration.

There is talk about a $5,000 opera house in Pleasant Hill.

There is to be a “female corridor” put in the Jasper County Jail.

A panther is said to have fixed his residence five miles east of Nevada.

It is thought that great good would be done by a railroad between Versailles and Bolivar.

The ghost of Jake Brown, who was hung recently, scares the colored folks of Jefferson City away from the jail of nights.

In Verona County, a woman has brought suit for divorce against her husband who forces her to work in the field and compels her to wear men’s clothes, although he is worth $20,000.

The closer you get to most statesmen the smaller they get.

What we want in politics is more Star Spangle Banner and less $$$.

Prof. J.S. Mercer has rented the Pennington grocery stand on the south side of the square and will occupy it with a stock of provisions and meat.  The new establishment should receive the patronage of our citizens.

John Barris and Carrel Hatfield, who have been languishing behind the bars for some time, made their escape last Monday night through the east door of the cooler.  Some vile wretch, who is far meaner in principal than those who he liberated, chiseled the lock off of the door, and it is supposed bid them God’s speed in their departure.

The citizens of Ava met at the Opera House June 1 to determine whether or not to celebrate the 118th anniversary of our country’s birth.  J.M. Curnutt was elected chairman and H.S. Wilson secretary.  On motion it was unanimously agreed that we celebrate.

A jail delivery occurred in Springfield last night after ten o’clock, and a one-legged prisoner named Williams and Wm. Brown, both held for burglary and larceny, made their escape by burning a hole through the eight inches of wood and then breaking a hole in the outside brick wall of the jail.  John Hargus, the Webster County murderer, was given a chance to flee with the others but declined to go.  Officers are on the track of the escapees and it is believed they will be retaken shortly.