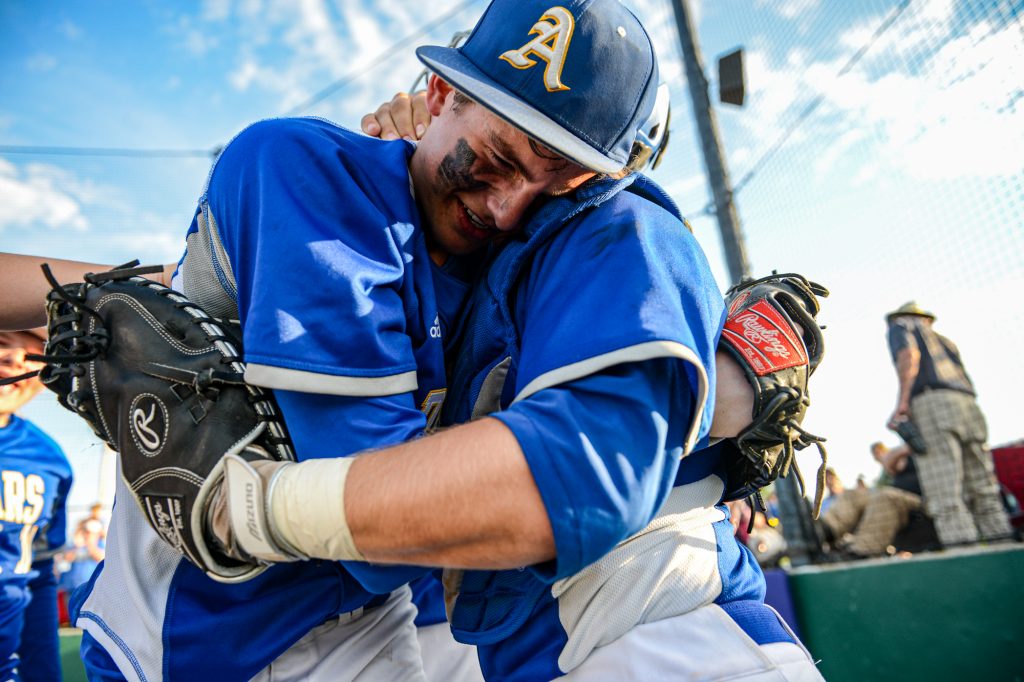 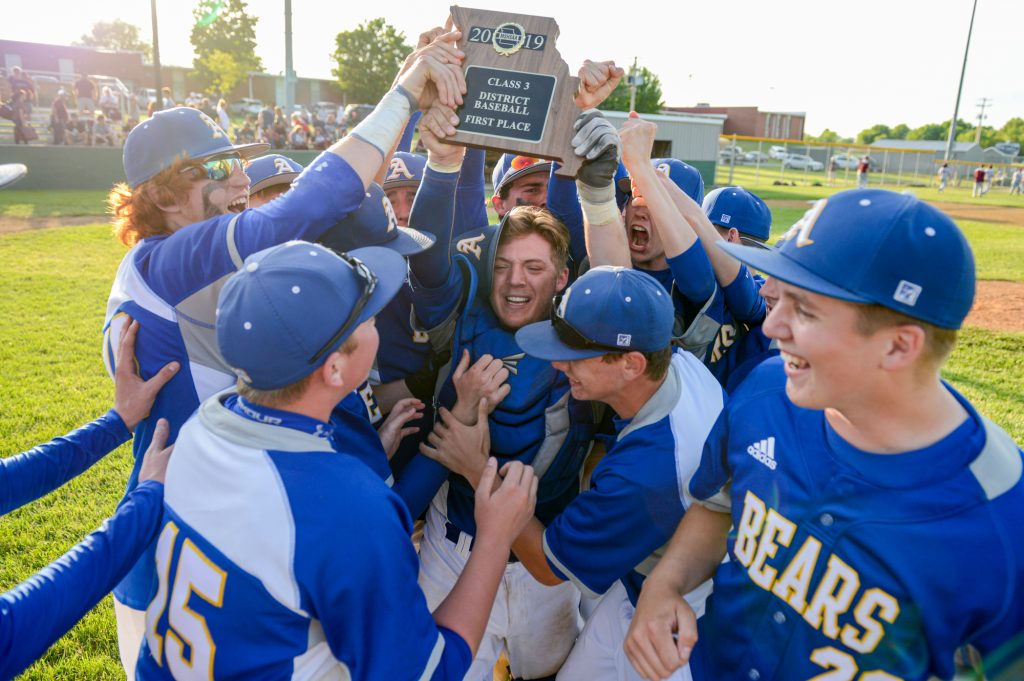 FAIR GROVE – It was difficult to predict the outcome of Wednesday’s game against Strafford. On paper, Ava High School had the winning percentage, the better away record and had allowed fewer runs per game – 3.9 vs Strafford’s 4.4.

To further blur the lines, Stafford had lost to Forsyth 9-5, a team Ava overcame with a solid 7-1 win on April 26. Then again, Ava had been shutout 4-0 by New Covenant Academy, a team Strafford just beat 1-0 to move to the final MSHSAA Class 3 District 11 game for all of the proverbial marbles.

Coach Rex Sawyer had spent two of his ace pitchers in games one and two of the tournament with Caleb Johnson (44 IP, 1.254 ERA) pitching his heart out on what could have been his last appearance in the high school level of play.

Then freshman Zach Richards (32 IP, 1.750 ERA) blew away all expectations of a first-year opener with seven strikeouts and the defense to back his performance up against Fair Grove leading to a 4-1 victory and another day of play.

With both pitchers near or at their pitch count limitation – 95 for under classmen and 105 for upper classmen – Wednesday’s game was expected to be on the shoulders of Ava sophomore starter, Bryce Dodson (32 IP, 1.299 ERA) as Johnson and Richards are on at least three days of required rest.

The pitch count turned its ugly head and put the Bears in a precarious situation. The counts ensure that coaches cannot over-throw a player for the sake of a win while endangering their student-athlete’s college/professional baseball prospects. Since its implementation, pitchers are at a lesser risk of shoulder or elbow injury.

Tom Emerich (15 IP, 1.787 ERA) can throw from the mound, and that was the idea going into Wednesday’s championship game.

A lot of variables and uncertainties came onto the diamond as the Bears took to the field for the National Anthem.

Then, they put it all behind them and played ball.

Tom Emerich (.333 AVG, .943 OPS) ran up the count and made first on a walk but was picked-off at the bag. Johnson (.361 AVG, 1.086 OPS) then flied-out to the Straffod shortstop, Mason Foley. With two down, teeth clinched as fans groaned when Spencer Skyles (.295 AVG, .696 OPS) was put out advancing to second after reaching on Ava’s first hit of the game.

The first three appeared to want to score early and often and it helped drive up the pitch count for Strafford’s Dillon Turner, but it also gave the Indians a chance to get ahead out of the gate.

Mason Foley would turn out to be a thorn in Ava’s side on both offense and defense. Foley was responsible for four putouts and also scored two of the Indians’ three runs.

Emerich was on the mound in the bottom of the first, and it was obvious that it was not his day to pitch. Foley was walked on the 3-1 pitch and a small ball bunt from Strafford’s number two hitter Dillion Hester led to a base hit, advancing Foley to second.

The two opened first with a double steal, really bringing pressure on the Bears early in the game. Anthony Caldwell made the sacrifice fly to centerfield, earning an RBI after Foley stomped on home plate. Dillon Turner followed in the same fashion but was robbed of a damaging hit when Spencer Skyles (.882 FPCT) gloved the ball inches from the left-centerfield fence.

Nicholas Oliver managed a triple off of Emerich, threatening the third run but Wyatt Maples was caught up by a 6-3 grounder for the final out.

Emerich just wasn’t having his day at the mound and stepped aside for sophomore Zack Miller (9.2 IP, 2.897 ERA) who managed to keep the damage at two runs through the fourth inning.

It seemed a lot to ask of a underclassmen player who has had a great season at third base. He has 25 putouts, one assist and a double play under his belt this season with a fielding percentage of .765.

“I was a little nervous,” said Miller.  “I just thought – you got to slow down, throw strikes and good things will happen.”

Miller took the role and ran with it while Emerich returned to his dominant position at shortstop.

Johnson had his first passed ball of the game on the third strike, no less. This allowed Kyle Schatzer to reach first, then second on a 6-3 grounder off the bat of Hunter Langston.

Miller kept his composure and let the defense do its job what would become a late-inning, team-effort for the win.

“I have a great defense behind me and I knew if they hit the ball, they’re going to have my back.” said Miller.

Foley returned, but flied out to left field for out three. Miller and the Ava defense kept the cap on Strafford.

The Bears threatened again in the third but stranded three on the pond in what appeared to be a glass ceiling for the Ava offense. Twice, they threatened and didn’t capitalize at the plate.

Zach Richards (.263 AVG, .599 OPS), the pitching hero from Tuesday’s game, led off at the top of the third and parked at second when a pitch got past Strafford catcher Wyatt Maples.

Emerich picked up the walk on the 3-0 pitch and advanced along with Richards on a sacrifice bunt from Spencer Skyles (.295 AVG, .696 OPS).

Caleb Johnson (.361 AVG, 1.086 OPS) was up in the three-slot of the Ava line up, where he has spent most of the season batting Skyles. Knowing the potential of the senior to ding the ball and make RBIs – he has 23 this season – the Indians’ coach elected to intentionally walk him with his .574 slugging percentage.

Kayden Myers (.305 AVG, .911 OPS) has been due in the past few games but whiffed on the full count for the second out.

Carter Campbell (.305 AVG, .727 OPS) was caught looking on the 1-2 pitch, ending the Bears’ chance at taking back control of the game before too many innings got put away.

Top of the fifth and Ava needed some baseball magic to happen if they planned on avoiding a shutout after fighting through the tournament as the number five seed, underdogs against some of the state’s top-ranked teams.

But pitchers can run out of steam, and pitches.

Either way, it was the top of the fifth and Emerich was up against relief pitcher Mason Foley.

Emerich led off the order, running up the count and reaching first on his third walk of the game. Then Skyles walked on the 3-0 pitch followed by Johnson on the 3-1 pitch.

Myers got a good piece of the 1-0 pitch but popped it high and shallow, triggering the infield-fly rule. Campbell lined up at home and pulled-off an RBI single with Emerich tallying the first run on the board for the Bears.

Less-than-desired pitching continued from Strafford with Skyles on third, with wheels. The freshman centerfielder found an opportunity on a passed ball and was called safe at home, knotting the game at two.

Miller was replaced at the bottom of the fifth after leaving what he had on the mound, and it was Dalton’s turn to shine.

Dalton started his closing performance with an 8.842 ERA and a 1.737 WHIP in six innings pitched, an unlikely hero according to the stat book.

Strafford took back the lead in the bottom of the fifth, the run credited to Miller who managed to keep the Indians at two runs with the aid of a close-knit Ava defense.

The defense did the work as Andrew found his footing atop the mound. A 4-3 grounder and two fly balls closed the inning out with a 3-1 lead for Strafford.

“There’s just a bunch of emotions,” said Dalton. “I was really excited to be there and nervous. I knew that I had good defense behind me, and coach believed in me. I just knew I had to throw strikes and that we’d be able to get the last out.”

The Bears had a three-up-three-down sixth and Strafford came close to tacking-on another run with Maples at third. He was stranded with a 2-3 third strike passed ball out on pinch hitter Lane Boswell and a 6-3 grounder from Langston.

Déjà vu ensued at the top of the seventh. Emerich wore the third pitch and took first and a stand-up double from Skyles pushed Emerich to third. Johnson was intentionally walked for the second time this game, loading the bases.

In the third inning, the Bears had failed to move runners when bases were full. Then Myers ran up the count and picked up a walk, Emerich scoring the tying run.

Campbell flied-out to centerfield, but Skyles turned on the wheels after tagging up for the catch, scoring the go-ahead run for the Bears.

Miller was also intentionally walked since the Strafford coaches had noticed his clutch, late-game home run against Fair Grove on Tuesday.

Myers attempted the same as Skyles but was put out on the passed ball attempt at home.

Two outs and Ava needed insurance, badly. The top of the Strafford batting order, the core of its offensive play makers was due up at the bottom of the seventh.

Then Zach Mendel happens to send a deep single for the RBI on Johnson making home, 5-3, Bears.

Dalton flied-out to the shortstop to end the top half of the final inning.

“We had already decided that when we tied it up, and I had Skyles over there, I said a fly ball and we are definitely going, we’re going to try,” said Sawyer. No matter what, with his speed and stuff and he got it in there. Then Mendel came up with another little clutch hit there and got another run.”

Foley managed to reach first on a walk from Dalton on the 3-1 pitch. Dillon Hester was up and got a hit from the 0-2 pitch, the ball chopped to Emerich who tossed to Richards at second to put out Foley, then a throw to first snagged Hester for a 6-4-3 double play!

Two down and three strikes left between the Bears and the district throne.

Caldwell picked up a single, but Dalton didn’t let it phase him knowing the defense had his back.

“I saw him get on,” said Dalton. “But I wasn’t necessarily worried about that run at the time because I knew that even if he scored we’d still be up by one. So, I was really just dead focused on the batter and every pitch.”

Turner was caught staring at the 0-2 pitch for a called strike three as the Bears cleared the dugout and massed at home plate to celebrate the save by freshman Andrew Dalton!

“I didn’t really know if (the umpire called) it a strike or not,” said Dalton.  “I thought I’d heard him say strike and Caleb was celebrating, I was just pumped.”

“We beat them,” said Sawyer. “One, four and two (seeds) in that order. Our kids just played their hearts out. They’re warriors. They don’t give up. They keep playing the game. We as coaches we tell them if we can keep things close, good things will happen.”

The fairy-tale underdog in a new district with state-ranked opponents came through for the win and the home field advantage against District 10 champs, the Clever Blue Jays.

“They’re (Clever) a good ballclub, they’ve got to come to Ava, and we’ll decide on a time,” said Sawyer. It will be a ballgame; they won a district there and you don’t win at this time of the year unless you’ve got something.”