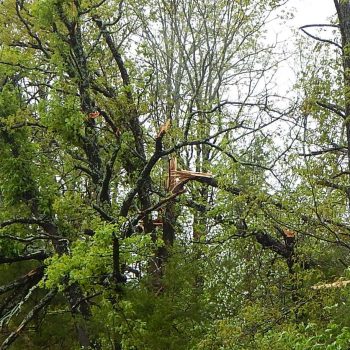 On May 6, the National Weather Service (NWS) in Springfield, Mo. released preliminary information citing 28 tornadoes have been confirmed so far, as investigators continue to survey storm damage in the Ozarks. A series of fierce storms hit southern Missouri on April 30, targeting areas in Douglas County, including Ava and nearby communities.

Last Tuesday, torrential rains and severe storms bombarded the Ozarks, dumping massive amounts of rain in a short period of time.  Flood waters were exceptionally high, as city roadways were quickly under water in some areas, and creeks and county streams overflowing.

Residents at Vera Cruz reported rain gauges with nine-inches of water, and several homes in town recorded seven inches or more during the heavy downpour.

One fatality has been attributed to the storm, as one man drowned Tuesday night while continuing to camp out in spite of the severe weather activity.  The individual has been identified as 59-year-old Robbie Turner, of Ava.  Turner was camping in the Vera Cruz Conservation Area near Bryant Creek when storms ripped through where Turner was camping.

Turner’s body was recovered about 200 feet downstream from his campsite.

Areas around Squires, Goodhope and Brushyknob report damages from tornadoes and high winds, with downed trees and structures.

In Squires, NWS confirms an EF-1 tornado tracked from four miles southwest of Squires to five miles northeast of Squires with wind gusts estimated at 107 mph.  The width of the tornado encompassed 200 yards, with a path length of nine miles.  Trees were damaged along the path, with significant damage to Star Chapel Church building, at the intersection of Hwys. 14 and VV.

An EF1 tornado is confirmed at Hunter Creek, with high winds of 100 mph.  Damage occurred along side Hunter Creek and north of the creek, with destruction to numerous large trees.  The total path length was three miles.

In Brushyknob, NWS reports an EF-0 tornado touched down damaging many large trees, with several snapped.  The length of the path was 2.86 miles, with peak wind speeds of 80 mph.

NWS confirms an EF-0 tornado in the Goodhope area, where several trees and homes were damaged.  The length of the path was 1.86 miles, with peak wind speeds of 80 mph.

In nearby Christian County, from Ozark to Rogersville, an EF-2 tornado tracked from two miles north of Ozark to five miles northwest of Rogersville.  Maximum wind gusts were estimated at 134 mph, with a path width of 400 yards and a path length of 10 miles.  According to the NWS report, the tornado started at 8:28 p.m. and lifted about 8:40 p.m., with total destruction to several homes, and heavy damage to other residences sitting in the path of the storm.  Outbuildings and trees were heavily damaged, many trees uprooted, and three injuries reported

Tornadoes have also been confirmed near Eudora, in Polk County, where an EF-1 touched down.  At Miller, moving from Lawrence Co. to Dade Co., an EF-1 was confirmed. A second tornado near Miller tracked from two miles southwest of Miller to two miles northeast.

In Barry County, five miles north of Purdy, an EF-0 tornado touched down for 10 minutes, destroying outbuildings and trees. At Wheaton, in McDonald and Barry counties, an EF-1 tracked for five miles, moving from Rocky Comfort to northeast of Wheaton.

EF-1 tornadoes have been confirmed as damaging areas north of Willard, and northeast of Willard, both in Greene County. EF-1s also hit Theodosia in Taney and Ozark counties, Stone and Christian counties, southeast of Macomb in Wright County, Phelps County, Dallas County, and several locations in Texas County.

The National Weather Service tornado reports may be found on their website: https://www.weather.gov/media/sgf/pdf/NWS1_SGF_Tornadoes_04302019.pdf