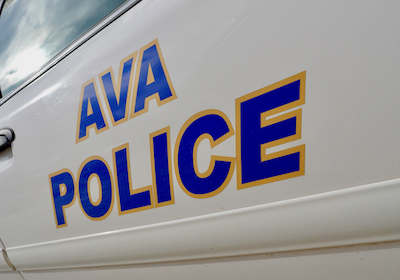 On April 1st, Ava Police performed a traffic stop on North Jefferson street. They arrested a passenger who had an outstanding warrant from the West Plains Police Department. The driver was given a warning for a registration related violation.

On April 3rd, Ava Police responded to a call from the Super 8 Motel on South Jefferson St. A male subject, believed to be intoxicated, was allegedly disturbing other guests. Ava Police advised him to stay in his room. On April 4th, Ava Police returned to the Super 8 after complaints about the same individual allegedly now screaming and swearing at the Super 8 clerk. The subject was arrested.

On April 4th, a black and white pit bull was the cause of multiple complaints in the area of Washington and Fleetwood streets. The dog attempted to bite a jogger, an officer, and others. The Ava Police responded and located the dog’s owner, who agreed to remove it from the city.

The Ava Police made 7 traffic stops for excessive speed.