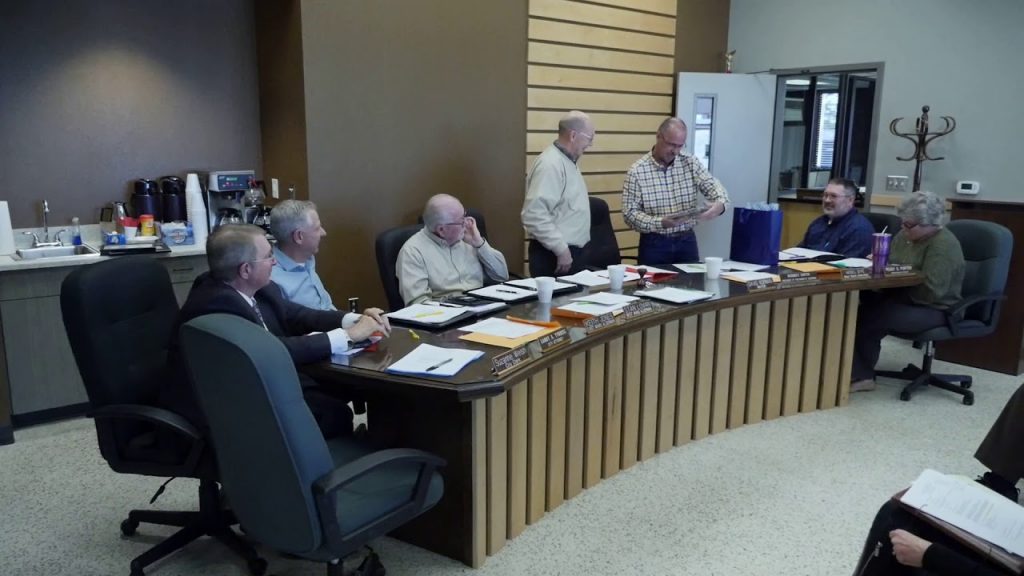 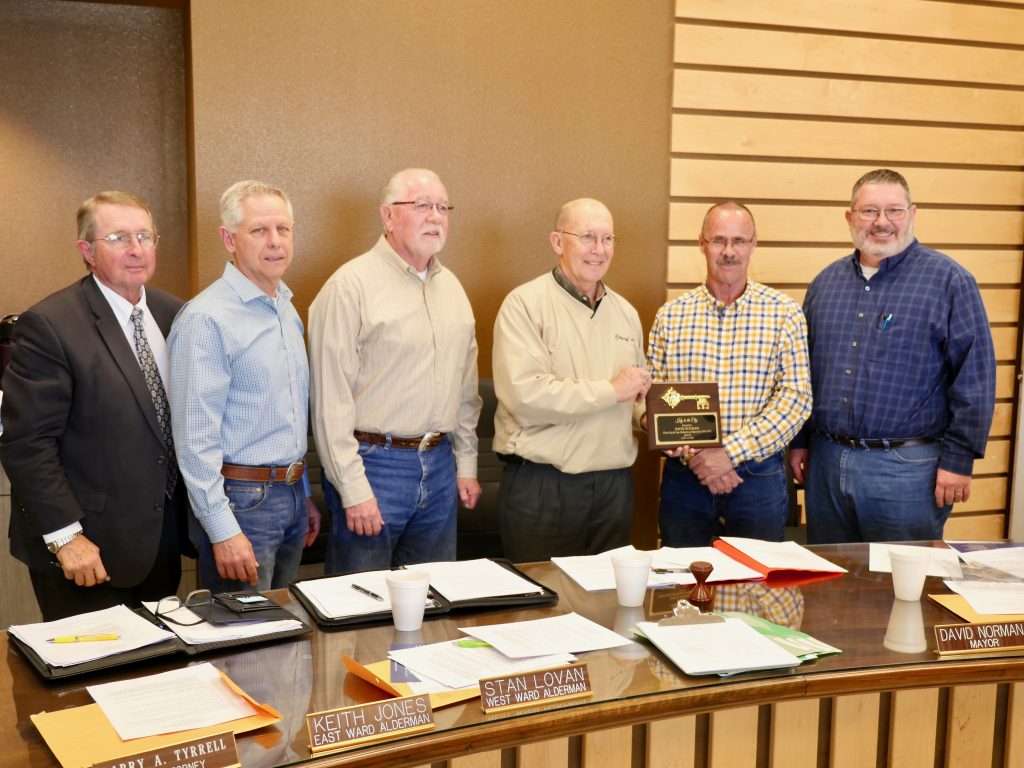 During council meeting on Tuesday, the Ava Board of Aldermen, along with city employees, presented outgoing Mayor David Norman with a Key to the City of Ava, a plaque recognizing his term in office and service to the community.  Shown above, from left, City Attorney Larry Tyrrell, East Ward Alderman Keith Jones, West Ward Alderman Stan Lovan, Norman, East Ward Alderman Burrely Loftin, and West Ward Alderman Noel Dye.  Since Norman did not file for re-election, this was his last official meeting as Mayor of Ava.

The Ava Board of Aldermen amended Ordinance No. 1046 which previously established how the municipal court  would transfer to the Douglas County Circuit Court on April 5.  In the revised document, Ordinance No. 1049, the minor adjustments noted amending the clerk fee amount, and how fines and court fees would be processed and distributed.  Changes made to meet state requirements, and the county fee structure.

The aldermen also authorized the mayor to sign a contract with QT Pod for the purchase of a new QT petroleum on demand M4000 digital card reader for the fuel system at the Ava Bill Martin Municipal Airport.  The cost of the new equipment includes support and a service agreement, for a cost of $14,295.  However, installation of the equipment will cost an additional $1500 to $3000, and requires the expertise of an electrician for hook-up.

According to Mayor David Norman, the City has the option to pay for the equipment in full, or make two payments, with the first in June, and the second in October.  By purchasing the equipment now, the City is able to take advantage of a $2,000 rebate offer.

Norman reported construction of the electric department building is now underway, as the trusses were installed on Tuesday.

Norman advised the City was recently contacted by Mike Gardner and Jerry Carter, withViacast WiFi, a company interested in installing an antennae on one or more water towers.  Norman said the company presently provides Internet in Ozark County and is looking to expand service.  He noted a quote of $125 per tower was given to the group.

In addition to recognition from aldermen and city employees, Norman was also recognized by Ava Country Club board members for assisting the golf course throughout the years, as well as providing extensive clean-up and electrical help last year following the storm damage that was highly destructive to the site.  Representing the Country Club board, Nate –––– and Lionel Daugherty expressed thanks to City of Ava crews for the prompt assistance and work ethic in cleaning up the mess and re-establishing electricity after the storm.

The Mayor was also recognized by the Lions Club for assisting them with various projects and providing community support to the group.

During the meeting, Norman thanked councilmen for working well together.  He said “a mayor has no authority, but it takes the four aldermen working together to make it work.”  He said his “four years have been good, with a good council.”  He admitted that taking care of an $11,000,000 budget isn’t always easy, but with the help of Treasurer Peggy Porter and City Clerk Suzanne Welsh, the City has been able to accomplish many projects.

The Board of Aldermen, along with a newly elected mayor, will reconvene on Tuesday, April 9, 5:00 p.m. at City Hall. Meetings are open to the public.