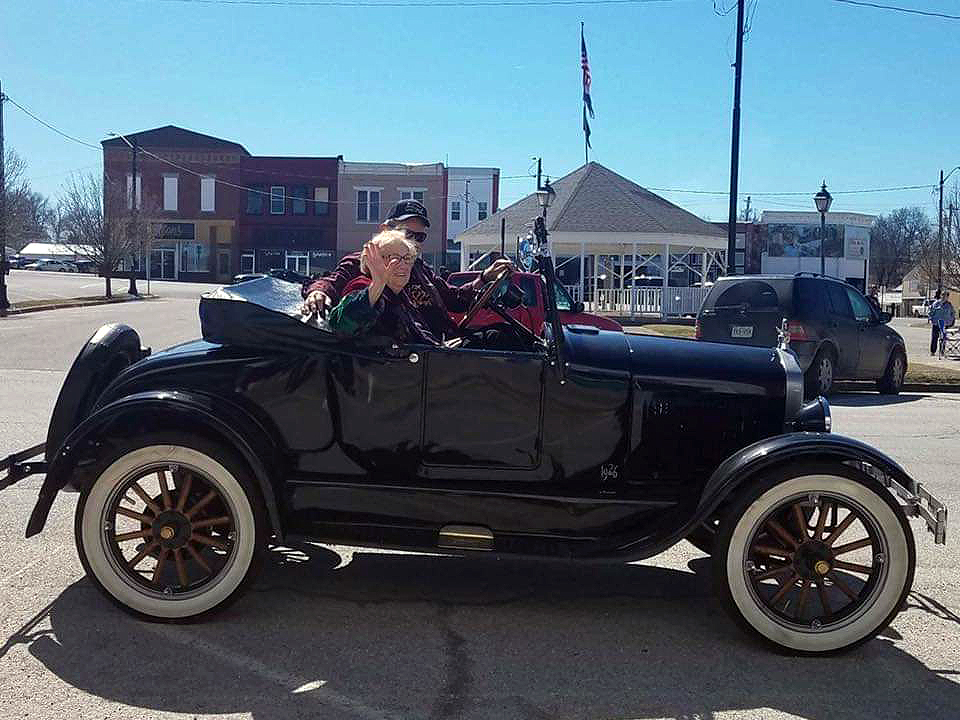 Photo by Kaylee Hall On Saturday, March 16th, 2019 Ava resident Cinita Brown got a ride around the Ava square with Tom Hicks, of Ozark, in his 1926 Ford Model T.

Tin Lizzie on the Square

The Springfield Regional Center recently opened an office in Ava and is now available to serve residents of the Douglas County Health Department, just south of the Ava square.

Sabrina Cox of rural Ava is a finalist for the state of Missouri in the Miss Pre-Teen of Missouri competition. 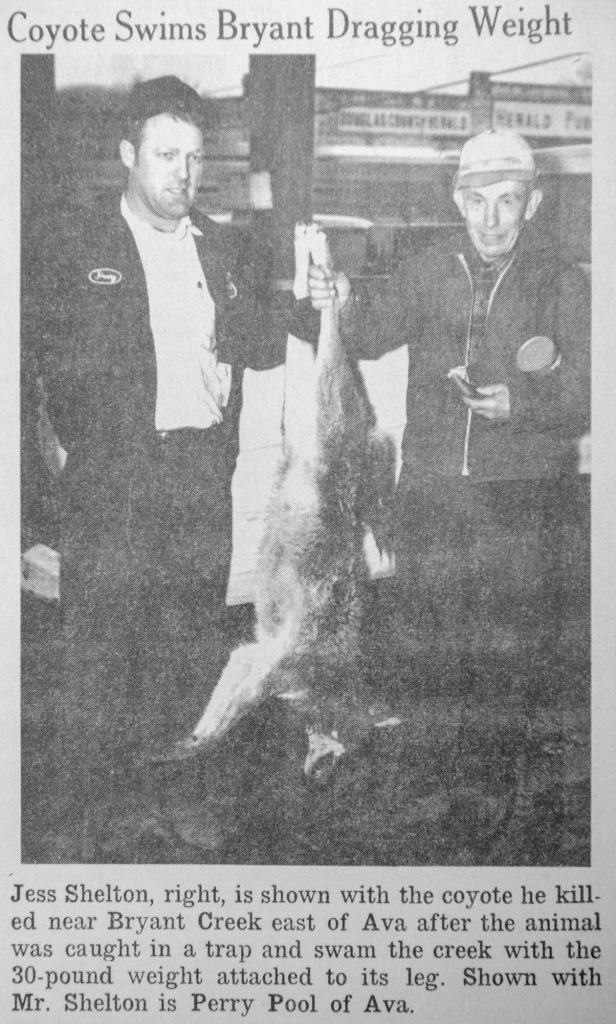 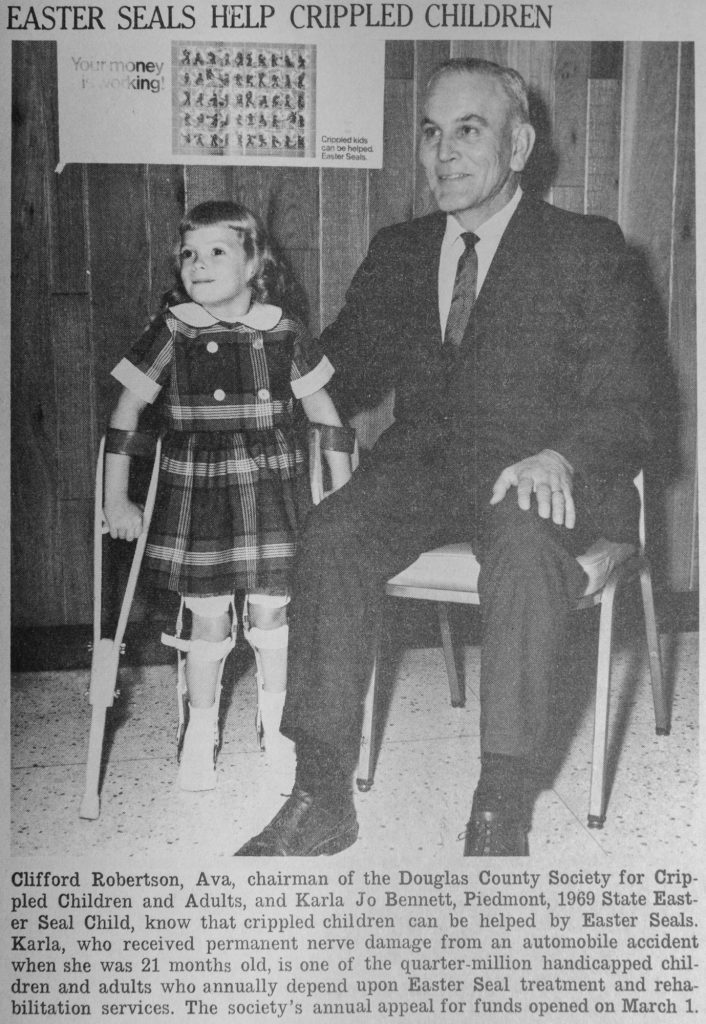 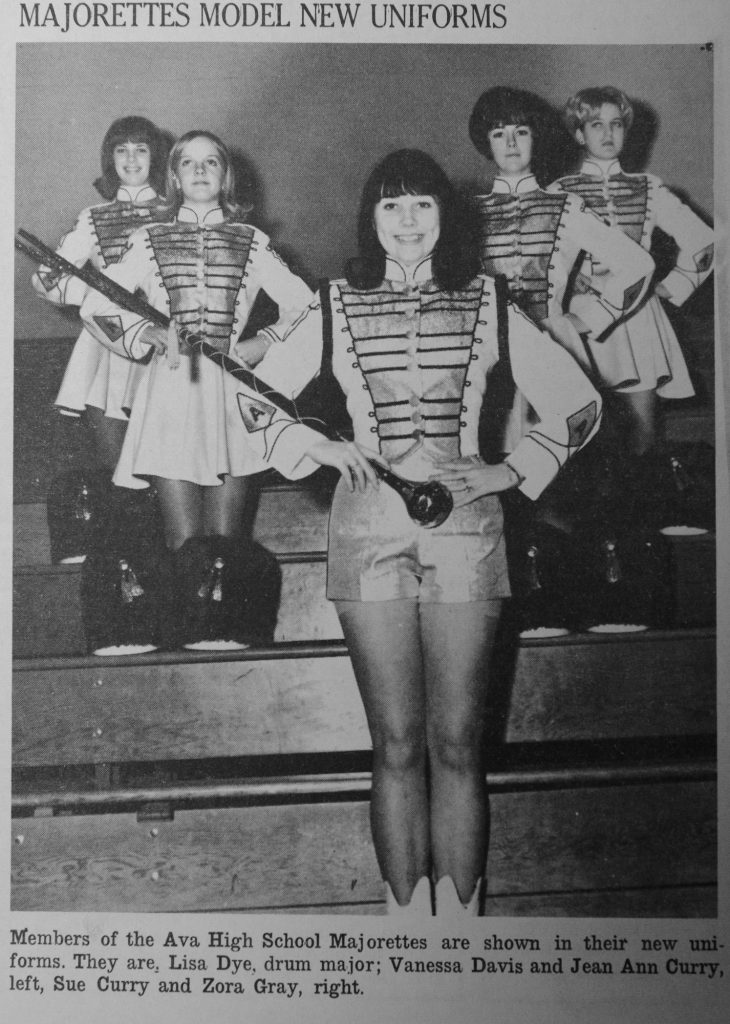 Because of several cases of rabies in animals in Ozark County all doges have been placed under quarantine, it was announced by Marcus E. Holman, area extension director.

Melvin Overcast, representative for the Douglas County Farm Bureau, announced this week the opening of an office at the junction of Highways 4-14 behind Hutch’s Country Inn.  Mr. Overcast will be in charge of the local Farm Bureau organization, Farm Bureau insurance and Blue Cross – Blue Shield insurance.

Samuel L. Heriford, son of the late Kenneth and Neva Hriford of Romance, recently graduated from a tool and die apprenticeship program in Springfield and is now entering the metal fabrications trade as a journeyman.

Attention Students:  In case of atomic attack, the U.S. Supreme Court’s ruling on prayer in schools will be immediately rescinded.

STRICTLY FRESH – A non- figure-conscious 36-22-36 secretary is much more attractive than the most sophisticated and accurate 12x10x12 desk-type computer.

Two Ava High cagemen have been named to this season’s South Central Association basketball all-star team. Gary Lafferty of Ava landed in the five-man first squad of the all stars.  Danny Silvey, also of Ava, is listed in the six-player second team.

EVANS –– Alfred Brown was bitten by a dog Sunday.

Larry Wayne Owens has just returned from Kansas City where he successfully completed the course in auctioneering and auction sales management at the Missouri Auction School.  He is married and the father of one daughter. He is a graduate of the Ava High School.

An open mouth can be the hallmark of a closed mind.

One of the things holding many marriages together is the high cost of divorce. 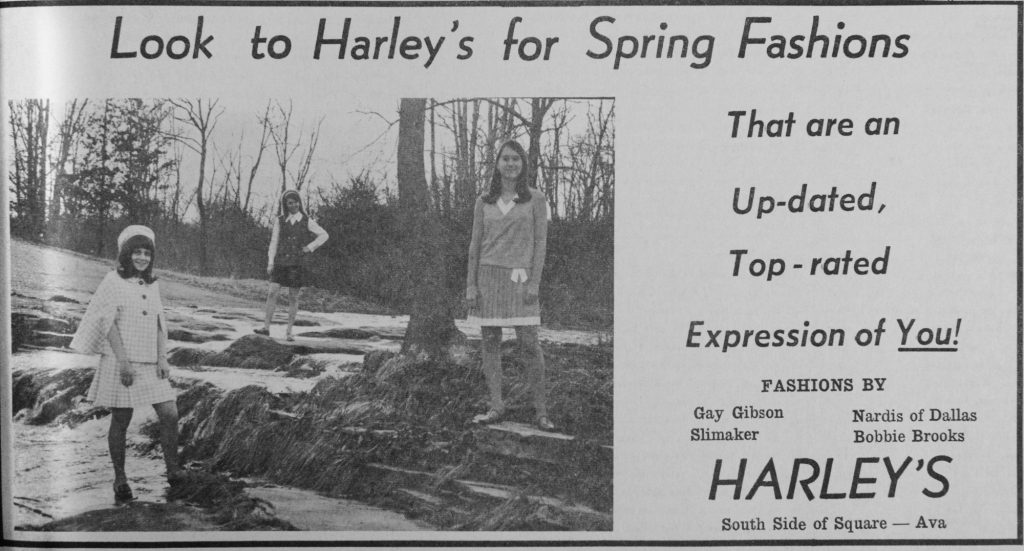 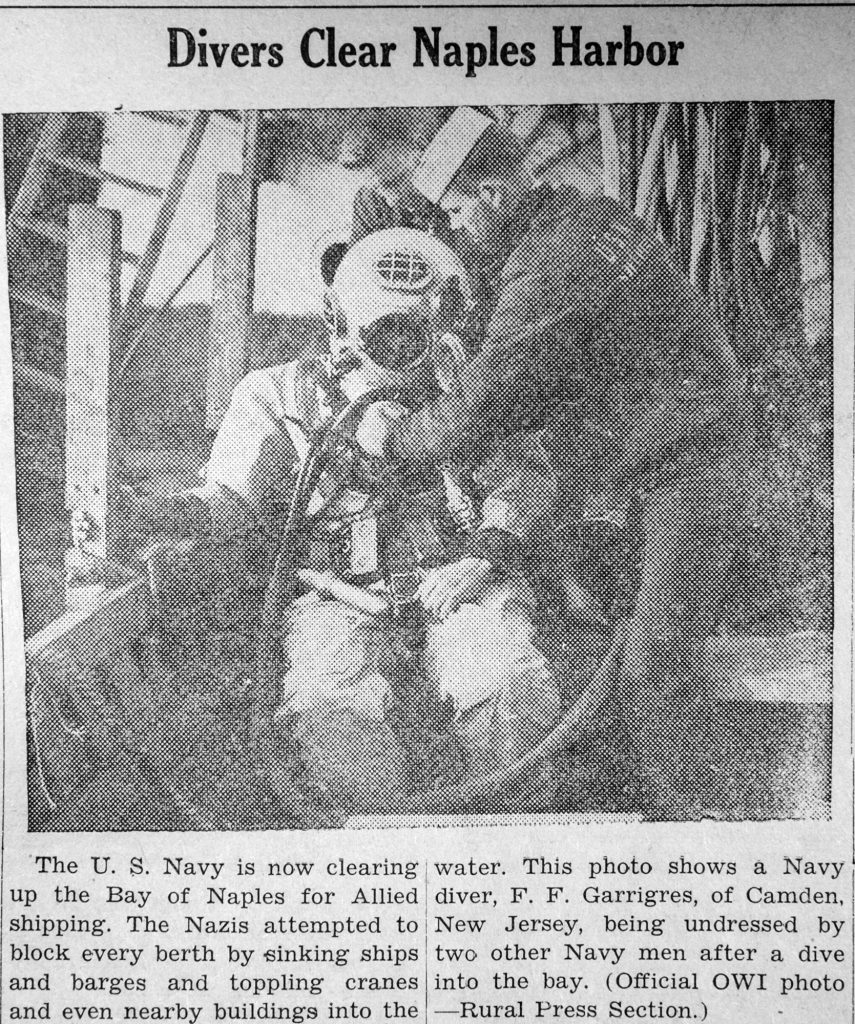 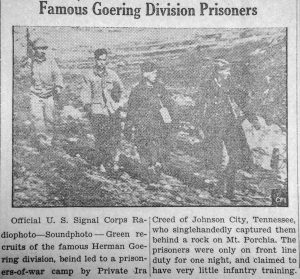 Germany, Tuesday, was in control of Hungary after a weekend coup in which the Nazis occupied the southeastern European satellite with a minimum of fighting.

William Carroll, about 68, was injured Friday shortly before noon in a freak accident in which he was struck by a run-away truck wheel.  Mr. Carroll had just emerged from the Norman-Gentry Drug Store and was standing by the store window when he was struck by the wheel. The wheel had come off of a pick-up milk truck that was approaching the square from the east. The driver, Bill Degase, said he saw the wheel, the outer one of a rear dual, roll past the truck as he passed the Ava Hotel.  He attempted to swerve the truck to stop the wheel and the inner wheel of the dual dropped off, stopping the truck.  The outer wheel rolled toward the drug store, hit the curb and bounded through the air, striking the man on the side of the head. Mr. Carroll said the force of the wheel spun him around about three times.  The drug store window was shattered. 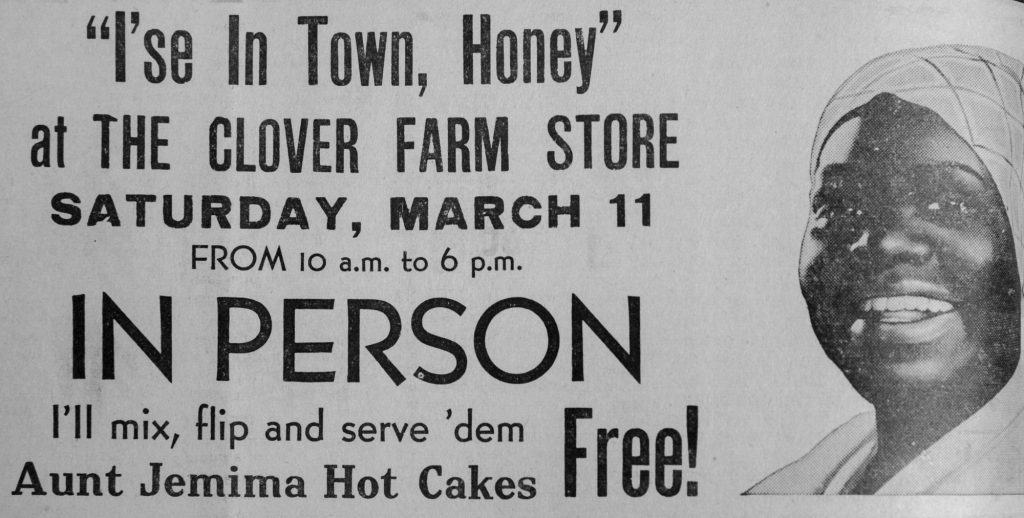 New postal rates established by the U.S. Post Office Department go into effect Sunday, March 26, Mrs. R.L. Ellis, postmaster, announced this week.  On first class mail the rate is three cents for each ounce for letters to be delivered anywhere outside the local post office.  Drop letters, mailed in the Ava Post Office and to be called for in the post office, as there is no letter carrier service in Ava, will be at the former rate of one cent an ounce.

More than 19,000 of the 112,000 people of Japanese ancestry evacuated to relocation centers from the west coast two years ago have been granted indefinite leave to establish homes outside the centers, the war relocation authority announced.

The March meeting of the Ava High School faculty and board was held Thursday  night last week in the clothing room of the high school.  The Rev. Howard Woodruff, pastor of the Ava Methodist Church, spoke on “Education for Race Relations.”

ROBERTSON –– Woodrow Gray has made three new ponds on his place.

An Ava High School basketball squad composed of freshmen and sophomores defeated a Mansfield team by one point Wednesday afternoon in the Ava gymnasium.

Seaman Harlan Sherrill, water tender 2-c in the U.S. Navy, left Monday for Brimington, Washington, to report for duty after spending a week visiting with  h is parents, Mr. and Mrs. John Sherrill and family of Wasola.

April 1st Uncle Sam’s New Tax Law goes into effect, and Pettiti’s Theatres will have a price change.  New admission prices will be: children under 12, 10¢ to any show.  Adutls as follows: matinee, 20¢; nights, 25¢.

WASOLA –– Fred Hicks and family left Tuesday for Bolivar where they are to operate the cafe he recently purchased.

MT. TABOr –– Farmers in this community fear for the fruit crop since the freezing rain and snow Sunday night. Some of the peach blooms were fully opened.

A light cyclone struck three miles west of Ava during the heavy rains and storm Saturday night of last week. A silo at the C.A. Harnden farm was demolished killing a yearling calf, a 90-foot chicken house was blown away and a cow shed demolished hurting three milk cows.  At the Stanford Privett farm, northeast from Harnden’s, a barn was blown down and a part of the roof taken from the residence. Several large trees were uprooted, haystacks blown away and fences damaged in the path of the cyclone.

Although 1919 is being heralded as a “locust year,” this insect plague is not expected to hatch in Missouri in large numbers this year except possibly in a few communities.  The “periodical circada” or so-called locust is not, in fact, a locust, yet the name has been so generally applied that its real name is seldom mentioned except in scientific publications.

Christian County votes to issue bonds for the construction of a new courthouse building at Ozark carries by a majority.

LOS ANGELES –– Further details of Henry Ford’s plan to build a new automobile at a less cost to the purchaser than any automobile now extensively sold, were published today.  His plans contemplate the early erection of a parent plant probably at Detroit or at some point in the central states where water power will be available.  The new company will be owned entirely by himself and his family.

Mr. and Mrs. George McFarlin have sold their store at Mt. Zion four miles north of Ava and now have charge of the Hailey Hotel in this city.  The hotel is being repaired this week, and the new proprietors inform us that a complete outfit of new furniture has been ordered.

R.H. Greer, Marshfield, Mo., is agent for canning plants of 600 to 10,000 cans daily capacity. Also for power capping machines for capping cans.  Write him at Marshfield R1 for further information.

There are still several cases of measles in the city.

Louis Brown drove a bunch of hogs up from Squires Monday of this week, selling them to W.J. Morrison.

We hear all discharged soldiers who were in service six months will get to keep their uniforms and get $60 in money.  Hurrah! for our boys we hope they do.

CHENEY –– Measles are the most popular thing in our community at present.

Weddings and measles are epidemic in Fulton, Mo.

The Baptist College in Farmington is to be rebuilt.

The largest stave factory in the world is in Poplar Bluff, Mo.

A Carthage lawyer who began by dabbling in hypnotism, is now hopelessly insane.

Missouri had more regiments of cavalry in the Union Army in the Civil War than any other state.

Township collectors are reporting collections of 97 percent and upwards of the taxes.

Isaac W. Talbot, of Buchanan County, resigned the office of constable after holding it 15 minutes.

There is a story that the Missouri River is diminishing, but it is still able to produce catfish weighing 105 pounds.

A short prayer will get to heaven quicker than a long one.

A close friend:  the one who never lends you anything.

The bee is an artistic upholsterer.  It lines its nest with the leaves of flowers, always choosing such as have bright colors.  They are invariably cut in circles so exact that no compass would make them more true.

The man who is “driven to drink” usually has to walk back.

Last night at Carl Junction, a block of business buildings, the largest in the town was destroyed to fire. The Carl Junction bank, the Standard and Allen & Stiers are the heaviest losers.  The losses will probably reach $10,000.

At Republic yesterday, J.M. Youngblood a leading merchant was horsewhipped by a A.D. Rose, who charged that Youngblood had insulted his wife.

It is generally “all up” with a man when he begins to go down hill.

All the Santa Fe taxes for 1893 due in Douglas County have been paid with the added penalty under protest. The county treasurer today received checks for the amount.

PITTSBURG, Pa., March 16 – The nuns have withdrawn from the Riverside Schools. This action was taken in view of the injunction proceedings entered by the junior order of American Mechanics and the refusal of the Central Board of Education to pay their warrants.  President Minnick of the Riverside School Board said that the withdrawal of the nuns was final, and no further attempt would be made to introduce them into the schools as teachers.