In an abrupt but resolute move last week, the Ava R-I School District abandoned the old brick high school building at the recommendation of engineers who had been monitoring the structure. The evacuation involves both three-story classroom section on the east end which was constructed in 1917 and the two-story gymnasium addition which was built in 1930.

Ava’s Mark Wendler was named coach of the year by his peers.  Wendler, in his first year of coaching the Ava girls, led the Lady Bears to the co-championship of the SCA with a record of 19-7.  On the boys’ side of the ledger, 6’5” sophomore Aaron Dalton received honorable mention.

The select choir from Mt. Zion Bible School will be involved in a spring tour which will take them to several churches across the local area and throughout the state in the coming weeks.

Marge Hazelton, Ava, whose Teeny Weeny Ranch is located west of Ava at Dogwood, was recently featured in the Springfield Art Museum newsletter.

Mark Stillings and Jolene Tate, both of Ava, were named to the dean’s list this spring a MidAmerica Nazarene College in Olathe, Kan.

Jarrett Dougherty, along with Jeff and Sheri Easter, will be in concert in Springfield on Friday, March 25.  The concert will be held at the Shrine Mosque auditorium.

Elona Levan celebrated her 85th birthday on the weekend of March 11-13.

Staff Sergeant Preston  Breshears and family recently spent a month at the home of his parents, Jack and Barbara Breshears.

BRADLEYVILLE –– Mother Nature has again reminded us that she is in control.  She dumped 21 inches of wet snow on us at home and the folks out Rueter and Cedar Creek way had closer to two feet. Power was out for some as long as 22 hours and the tree damage was tremendous.

Dr. Taylor Woods, local veterinarian, announced this week that he has moved his clinic into new quarters north of the Highway 5-14 junction.

Two young soldiers bound over for trial in Douglas County Circuit Court last week on charges of burglary and stealing, changed their pleas from innocent to guilty Wednesday and were sentenced by Circuit Judge Garner Moody to five years in the state penitentiary with the sentences suspended.  Judge Moody said he feels that the best interest of the state and the best interests of the boys would be served if they would return to the Army and honorably serve out their time.

“Out of This World” will be the theme of the second annual Spring Style Show scheduled Saturday evening, March 15.  The Spring Style Show, under the direction of the Ladies Activities Committee will be held in the all-purpose room of the elementary building, according to Mrs. Robert Turton, committee chairman.  Back this year by popular demand will be the Belle’s of Society formerly from Dogpatch USA appearing as maidens.

THE SNOOP by Charles Cagle- Freedom of the press suffered another staggering blow this week as the state’s senators voted to suppress information on police arrest records.  Our courts continue to uphold and increase the rights of criminals, rioters and militants, but leave the law-abiding citizens virtually unprotected.

Longtime Gainesville attorney and former Ozark County Prosecutor Paul Boone has been indicted by a federal grand jury on four counts of tax evasion.  From Gainesville Friday night Boone said he had heard of the indictment but knew no details.  “I have not been given any details,” Boone said, “but I certainly  have not done anything to justify an indictment.”

GENTRY –– Mr. and Mrs. Glen Dale Barcus and children moved from here into the Skyline School District Saturday and Sunday.  Mr. and Mrs. Carl Joslin were at their new residence to assist them in moving.

Wayne McCullough, 53-year-old Ava night watchman, was bound over to the April term of circuit court Friday in a preliminary hearing on two charges of selling liquor without a state license.  McCullough was arrested in a raid on his rooming house the night of Feb. 26.  Tuesday night last week the Ava City Council rescinded McCullough’s commission as deputy city marshal. Walter Bacorn, also arrested in the raid and charged with operating a gambling room, was fined $25 and costs after the charge against him was changed to gambling. He pleaded guilty to the gambling charge in the court of Justice of the Peace Reeves.

Loss of the American submarine Corvina was announced by the Navy in Washington Tuesday, bringing to 20 the number of subs lost by the United States since the war started.

While it is possible that by fall there will be sufficient rifle and shotgun ammunition for game shooting, the WPB said that for the time being none can be spared from supplies needed by farmers to protect crops and livestock. No ammunition will be made available for amusement purposes.

Mrs. Alex Crumley and son, Leslie, entertained with a family dinner Sunday in their home on Ozark Street.

Lawrence Tate, who had visited in Ava since Wednesday last week, left Sunday to return to Wichita, Kansas where he is employed in the Boeing Aircraft Company. While in Ava he visited with his parents, Mr. and Mrs. Steve Tate and family.

Mr. and Mrs. Elza Rowe who recently sold their suburban home east of Ava, have purchased the C.V. Bond residence on Spring Street and plan to move to the property April 1.  The Bonds will move to their country home south of town which they purchased last week from Mr. and Mrs. Arthur Singleton.

Mrs. Evert Porter closed a successful school term at Kolb Friday with an average attendance of 31.

CROSS ROADS –– A pie supper was held at Cross Roads Friday night for the benefit of the Red Cross.  Phyllis Pueppke received the chocolates for the prettiest girl.

Sergeant Glenn E. Harnden of Fort Wood spent Saturday night and Sunday with his wife in the home of her parents, Mr. and Mrs. Homer Hailey.

The Income Tax drive comes to a close on Saturday night, March 15.  All payments and returns due on that date under the provisions of the new Revenue Law must be in the hands of local Internal Revenue Collectors before their offices close that night.  The Income Tax is being collected to meet the war expenses.  Every person who shouted and tooted his horn on Armistice Day is now called upon to contribute his share of the cost of winning the war.  Women are subject to all the requirements of the Income Tax.

A tennis club was organized last week.  The following officers were elected:  President Leona Miller, Secretary Esther Fletcher, and Treasurer Lloyd Miller.  They are at now at work on the court and intend to start playing soon.

The Arno Mercantile Company composed of C.E. Yeoman, John T. Singleton and J.A.G. Reynolds, was sold this week to Robert Blair, formerly a farmer near Arno. Mr. Yeoman who had charge of the business will return to Ava.

Mr. and Mrs. A.I. Hartley of Kansas City, formerly of Arno this county, are moving on to their farm four miles east of Willow Springs.

Mrs. Salome Cairnes, Mr. and Mrs. Delbert Cairnes of two miles west of Ava departed this week for Independence, Missouri, where they expect to make their home.

The City Election for the election of two Aldermen, one from each ward, mayor, city marshal and collector, will be held on Tuesday 1st day of April 1919. The voting places are the Courthouse in Ward No. 1 and the Meeker building in Ward No. 2.

So far we have not heard of a single instance in which a returned soldier had any fault to find with his wife’s cooking.

Harley Roper arrived in Ava Sunday from Camp Dodge, Iowa, on the way to his home in Vera Cruz. Harley was with the expeditionary forces in France when the war ended.

OAK FOREST ITEMS – Mrs. Akers received a letter Monday from Homer Akers who has been a prisoner at Armstadt and Gelson, Germany.  He was back with his old Company.

ROCKBRIDGE –– Mr. and Mrs. Andy Alms and son spent the weekend at the home of Mrs. Alm’s parents, Mr. and Mrs. J.P. Edwards.

The twitter of the bluebird is heard in Springfield.

Missouri makes a specialty of turning out boy preachers.

A 260 pound black bear was recently killed in Butler County.

Jefferson City is going to work a chain gang on the streets.

Webster County has reduced the pay of road overseers to $1.50 a day.

There are serious complaints about the nature and habits of the Howell County poor farm.

Clyde Stanley, age 6, of Clinton, Mo., was bound to see a blaze and set fire to his father’s barn.

A mule of Lowry City has been operated on for cancer and did not die of heart failure either.

The DeSoto post office was entered by burglars, the safe blown open and $250 in money and $1,700 in stamps taken.

The Supreme Court of Colorado has denied the appeals for new trials of Thomas Jordan, William Nesbit and Santiao Torres, who were convicted of murder and sentenced to death.

Prisoners in jail at Hot Springs organized a “kangaroo” court, tried one of their number, found him guilty and gave him 175 lashes.

In this test of horse flesh Tuesday, Long Tom Davis’ horse, Fred, succeeded in lugging off the stake of $700 by 29 feet in 440 yards. There was considerable money changed hands and an unusual amount of interest taken in the race, but every thing passed off smoothly.  Races of this class will certainly tend to the improvement of our stock and should meet with the encouragement of all lovers of improved grade of horses.

There are a number of land buyers in town this week looking into the vicinity of Douglas County dirt. Coming from the north where there is 8 or ten inches of snow, they see in our green meadows and blooming flowers a whole bushel of good.

The students at the Normal organized a live literary society last Friday night, and one may expect to hear an abundance of Bavarian logic and Ciceronian eloquence in the sacred precincts of the Normal each Friday evening.

Jack Gilbert has filled his bond as U.S. gauger, and will soon take charge of the distillery at Bakersfield to look after Uncle Sam’s interest in the Johnny corn curing therefrom.

An old woman in a village near Salzburg recently died.  Her death gave great satisfaction to the other villagers, for she was looked upon as a witch and feared accordingly.

A man who drives away customers?  A cab man.

It is an undisputable fact that every man who wears his watch in his vest pocket is behind time.

Every man has a show in life, but few of them find it a circus.

The Georgia Thumper grasshopper has a wing spread equal to that of a robin. 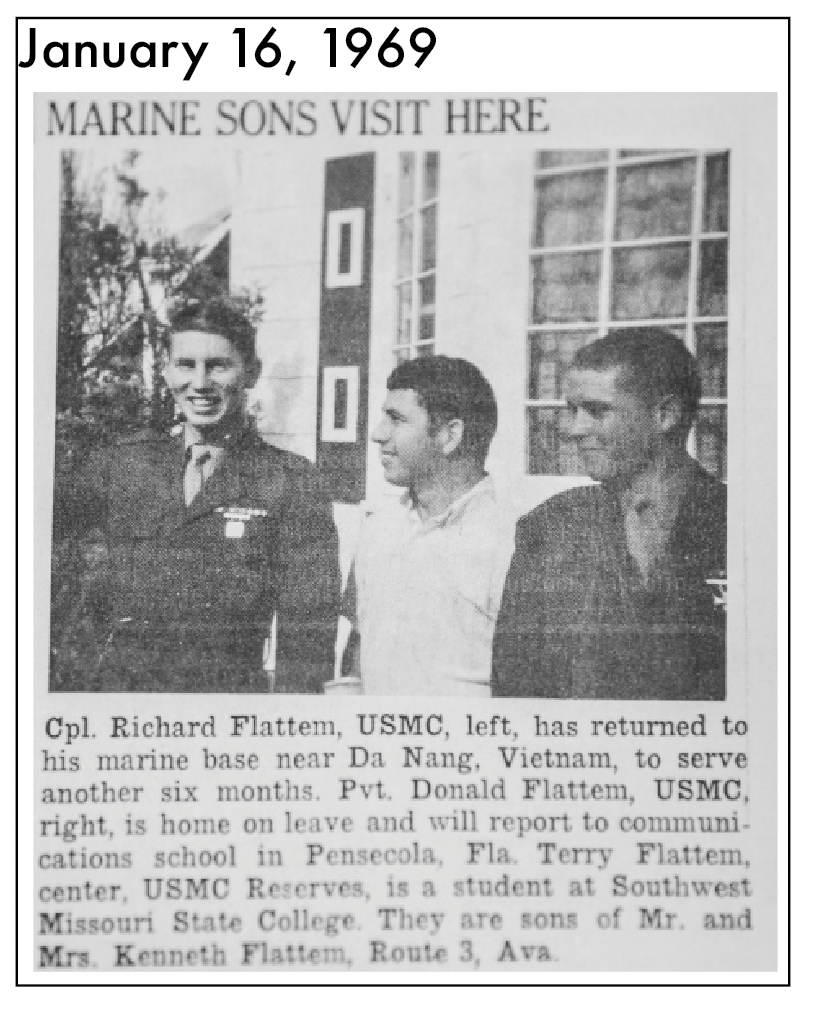