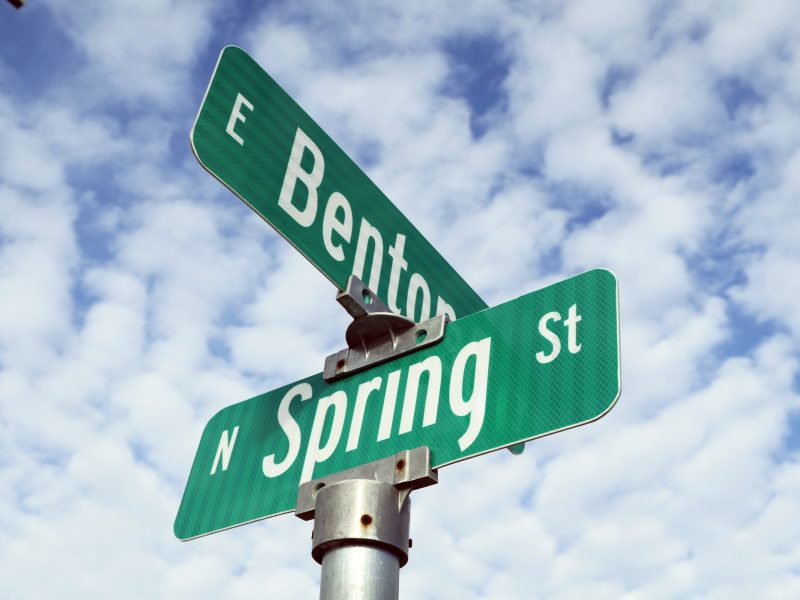 In 2017, the City of Ava changed most of its street names. Last week’s Douglas County Herald featured a survey that reported over 80% of residents were experiencing frustrations due to the change of street names.

Being inconvenienced running around town doing errands is one thing. How about people who have a job that involves finding addresses?

Sherri Doane, a real estate agent at Action Realty in Ava, said it’s just been a learning process. “We haven’t had many complaints,” she said. “We’ve gotten used to the new addresses.”

“I was initially resistant to the change because the new names had no rhyme or reason to them,” Action Realty broker John Sutton says. “But overall it hasn’t hurt our business one little bit. And in the long run the new names will be better.”

Kay Barnum, broker/owner at Barnum Realty in Ava has a printed street name cross-reference guide that has helped in her work. “Once I started using it I’ve only had one or two times where I got the addresses confused,” she said. “But I’d kinda like the addresses to be like they were.”

Lois Kilgore, realtor at Century 21 in Ava, has stronger feelings about the change. “It’s been havoc for us,” she said. “I don’t like it and would like to go back to the prior system of addresses.” For Lois, it’s more than just a preference. “It’s definitely cost me business,” she said. “People who want to move here and are shopping houses online can’t tell if they are real listings. When Google can’t place the house on a map they might think the listing is either fake or out of date.”

Rick DeGraffenreid, agent at Shelter Insurance in Ava, says the street name change has negatively impacted his business. The software that DeGreffenreid uses to create an insurance policy for a customer looks at where a property is located (and other factors) to determine the price of insurance. If the system sees the address as being in the city the cost of insurance would be cheaper than a similar property in the county. Mainly this is because the property would be closer to a fire hydrant and the fire station.

“I still have issues with certain addresses here in Ava,” he said. “I enter one, the system doesn’t recognize it, and it causes issues and headaches.”

Billing has also been an issue for Degraffenreid. “We still have some mail being sent to rural route addresses, and the post office isn’t delivering those,” he said. “If we send it to the new addresses, some gets through but it’s still iffy.”

For Kwincie Hannaford of American Family Insurance in Ava, the name change hasn’t been a significant problem. The new addresses can even be quicker to enter. “If customers know their new address, our system will pre-fill it,” she said. “The old addresses didn’t do that.” But they have had some hiccups in getting their incoming office mail. “FedEx doesn’t seem to know where Springfield Road is,” she said. “We still have to tell them it’s old Route 5.”

Speaking of delivery folks, how are they handling the street name change?

“We always work hard to provide excellent service,” said FedEx Communications Advisor Shannon Davis. “Although we are not aware of service issues for residents of Ava, we encourage any customer there with questions about their FedEx shipments or service to contact us at 1-800-Go-FedEx.  Customers can also check the status of their shipments at fedex.com.”

“It’s not an issue for us,” said UPS Spokesperson Matt O’Connor. “Our drivers use a proprietary mapping system that pulls address changes daily from the post office.” Each UPS truck is also collecting data that helps the system learn. “Each time you sign for a package on the driver’s gun,” says O’Connor, “the location is recorded along with the signature and package data. We then use that location for future deliveries to that address.”

Summit Gas Spokesman Dave Wilby says they’ve experienced issues, but they were temporary and not delivery-related. “Physically finding customers hasn’t been an issue for us,” he said. “Most of our drivers are local and familiar with the areas they are in. We did have some challenges with billing and paperwork getting returned in the mail, but that’s all died down.”

Finally, there are people that need to find addresses in a hurry. Police, ambulance, and fire crews don’t want to waste precious seconds finding a location when there are lives on the line. How are they coping since the street name changes?

The staff at CoxEMS Ava aren’t happy. “It’s a mess,” says CoxHealth EMS Supervisor Steve Wood. “The old system of streets and avenues wasn’t perfect, but we didn’t have any trouble finding addresses. It never cost us extra time. With the new system sometimes we have to compare an old city map to a new city map to figure out where we are going. That causes delays that we didn’t use to have.”

Ava’s Police Department has learned to deal with the new street names. “We’re used to it now,” said Ava Police Chief Reggie Johnson. “We use a cross-reference guide. I put one in each car and officers learned the new street names quickly.” Johnson also gave credit to the dispatchers. “They’ve been phenomenal. They’ll do the cross-reference for us and then give us and the fire crews both the old and new addresses. It’s not adding time to our responses.”

The Ava Fire Department is happy with the new street names. “Changing the names was the best thing the city ever did,” said Ava Fire Chief Tom Woods. “People forget that we were having a lot of trouble with the old system. In an emergency people forget where they live. They’d call in and say ‘I’m on ninth.” We’d ask Ninth street north? South? East? West? And all we’d get is ‘I’m on ninth.’”

It wasn’t just street numbers that were a problem. “We had both a mailing address and physical address,” said Woods. “They’d look at an envelope and give us a mailing address. We don’t want to mail you a letter, we want to find your house in an emergency.”

Overall? “It’s not causing a delay for us. Streets still go north and south. Avenues go east and west. House numbers zero out at the Square and get higher as you go further away from it. Basically people just don’t like change. But I’ve talked to bigger cities and they have the same problem – just on a bigger level.

And while a 911 system isn’t currently in the cards for Douglas County, Woods appreciates taking a step towards it.  “If nothing else,” he said, “at least we’re setting something up for the future.”

So – nearly two years later, Ava’s new street names face a mixed reception. Some residents have adapted, accommodated and moved on. Others hope for a return to the numbered grid of streets and avenues. Some business software systems know the new addresses and some do not.

We’ll look at those issues in upcoming articles.