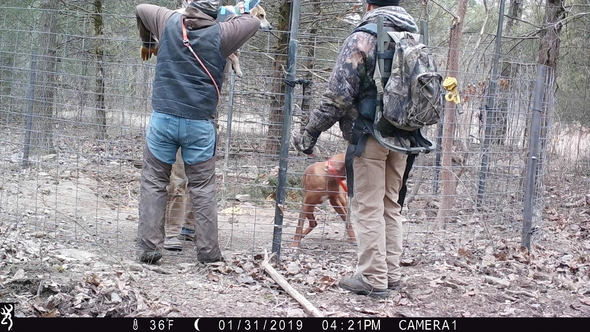 When hog hunters allow hunting dogs in and around feral hog traps it disturbs the trapping scene and causes feral hogs to leave the area. Consequently, the feral hog trapping team spends additional hours tracking the dispersed feral hogs and moving and resetting traps, sometimes to multiple locations. It can add months of work and expense to a trapping effort.

IRON COUNTY, Mo. – The Missouri Department of Conservation (MDC) and USDA Wildlife Services report government feral hog trappers experience difficulties with vandalism and trespassing at trapping sites. The public can help by educating others on feral hog damage, reporting feral hog sign, and reporting those who trespass with intent to hunt feral hogs or interfere with trapping sites.

“One of our Iron County trappers had interference from hog hunters on private properties on seven of 11 straight days he worked,” explained MDC Feral Hog Elimination Team Leader Mark McLain. “Another trapper in Reynolds County had six interferences with hog hunters and their dogs over the last three months while working on private land.”

In Missouri’s Ozark region, MDC and USDA feral hog trappers checked game cameras at a hog trapping site to find that, although the sounder of feral hogs had visited the trap on a regular basis, a feral hog hunter trespassed on the area and disturbed the trap. The disturbance delayed success of the trap for three months. In another incident, trappers visited a trap site to find someone’s dog tied to a tree within 100 yards of the trap while a man was trespassing on the private property and tracking the hogs with another dog. This type of disturbance can completely ruin a feral hog trapping effort.

“What people don’t realize is that feral hogs travel in groups of anywhere from 10 to as many as 60,” McLain said. “When someone trespasses onto an area where we’re trapping, and they chase the hogs, they may kill one or two from the group, but now they’ve scattered the rest of the group, sometimes for miles, impacting many new landowners.”

McLain explained that when feral hogs are scattered, they move into new areas, reproduce quickly (one sow can birth up to 18 young in a year) and with natural dispersal or human disturbance, they eventually return to the property they scattered from.

“The problem doesn’t just go away, it moves and multiplies and comes back,” he said. “This is why hog hunting won’t stop hog populations from growing and destroying more wildlife habitat, farms and fields.  Eliminating all feral hogs by trapping is the best way to stop feral hog damage.”

After decades of experience responding to feral hog damage across parts of southern Missouri, MDC and the USDA agree trapping is the most effective tool to combat the problem. Through trapping, whole sounders of feral hogs can be removed all at once without scattering them onto neighboring properties.

The trapping process involves a baited corral trap and then a multi-day wait for the sounder of feral hogs to develop a pattern of coming to the trap. Once the feral hogs develop a pattern, the trappers arm the trap to drop when the whole group is inside.

When trespassers disturb this process, it can cause the team to have to search for the scattered hogs and then move the trapping site, sometimes to multiple locations once the feral hogs have scattered. Feral hogs have been known to run many miles when chased. They can reach speeds up to 30 miles per hour and easily jump over low fences.

“This interference unnecessarily raises the costs of elimination efforts,” McLain said.He added that vandalism is common at the trapping sites and individuals have gone so far as to smash game cameras used by the team.

“Vandalism is documented and turned over to conservation agents for investigation,” said MDC Protection Chief Randy Doman. “People that vandalize and trespass aren’t usually the type to stop the behavior simply because you ask. This is criminal behavior and when caught, it can be costly.”

Members of the public can help, he said, by reporting trespassing activities.

“The cost of hog trapping is necessary because of the damage and expense they cause to the land, wildlife, landowners, and farmers,” Doman said. “MDC works with landowners and other agency partners to help eliminate feral hogs. Vandalizing traps only exacerbates the problem for landowners.”

MDC maintains feral hogs are not wildlife. They’re an invasive species. The department’s goal is complete elimination of feral hogs from Missouri. Though hunting is used to manage populations of native wildlife, since the goal is elimination of feral hogs, hunting is not an efficient means toward the goal. Other states that have allowed feral hog hunting, only saw populations grow. This is because allowing hog hunting inspires individuals to spread hogs across the landscape to create more “hunting” opportunities. This also increases feral hog damage to land and wildlife.

“Missouri allowed the take of feral hogs on public land for decades, only to watch our wildlife habitat be decimated in many areas and see our neighbor’s crops be rooted up, costing private landowners thousands in damages,” McLain said. “It’s time for neighbors to work together to trap and eliminate this invasive species.”

MDC encourages the public to contact local law enforcement to report trespassing. To report illegal releases of feral hogs or interference with feral hog trapping sites, report it to your local conservation agent or MDC’s Operation Game Thief hotline at 1-800-392-1111. Callers may remain anonymous and may ask to be considered for a reward. To report feral hog sightings or damage, go online to mdc.mo.gov/feralhogs.