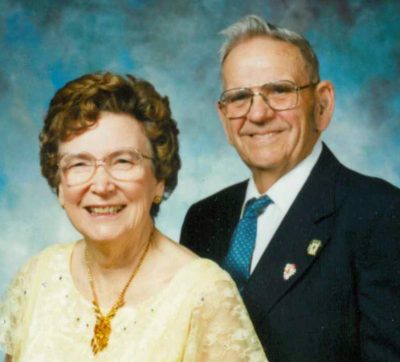 Betty Bell Weldon was finally able to join her husband, George, baby boy David, mom, dad, sisters, brothers and Jesus in Heaven at 1am on Monday, February 25, 2019 in her home with the love and support of two of her three daughters Ellen Jackson and Georgia Cain. Her other daughter, Susan McCabe was unable to be present as she lives out of state. Betty and George had lives that should truly be celebrated since they devoted their time in loving service of God and to others in the communities where they lived and worked.

George was a farm boy who survived the Great Depression then joined the CCC created by the Roosevelt Administration.  After leaving the program he became a lumberjack until he joined the Navy during World War II.  After returning from the war as a Warrant Officer, he and Betty returned home for a time before moving to California where he served as a State Park Ranger where he remained for over 32 years.  George left this world for Heaven on July 4, 2006 in order to ensure Betty’s eternal home was perfect.

Betty was also a child of the Great Depression who lost her mother when she was 12.  She met every difficulty she encountered as a child simply as a new challenge to be overcome.  She had married early in life and had a son, David, who she lost when he was only 10 months old.  She worked in various occupations during her youth before becoming a crane operator in the shipyards of Oakland, California during World War II.  She was considered one of the first “Rosie the Riveters.”

Betty met George’s mother at the shipyard where they both worked.  She was convinced to become a pen pal to the new sailor who was extremely lonely.  When his ship was due for refitting in San Diego, Betty and a girlfriend met the ship.  Prior to her arrival, however, he sold dates to other members of the crew.  After meeting her, however, he gave all the money back and married her three days later on November 24, 1942 in a little chapel in San Francisco.

Betty and George had 3 daughters.  She returned to school when her daughters were young to finish high school and earned degrees in teaching, as a reading specialist and as a school superintendent.  She worked in schools throughout California wherever George was transferred for work as well as teaching in Junior College, the Maritime Academy and the prison system.  In addition, Betty tutored and taught English to children in Mexico by hauling loads of primers in the back of her station wagon.  During her summer months she devoted her time going into the fields of California where migrants worked in order to teach their children how to speak English and read.  She continued to work for others throughout her life even creating internet articles about DIY projects until shortly before her death.  She and her daughters, Ellen and Georgia, moved to Ava several years after her husband’s death where they established Sisters Heritage Farm.

Betty and George loved each other with a passion and courage that surpasses time. They were both active members in the Odd Fellows and Rebekah Lodges as well as their local Grange while living on a small ranch in Oregon.  Through these organizations they were able to continue their work serving God and their communities especially focusing on providing for the needs of the elderly as well as economically and physically challenged.  They both loved life, loved others, loved God and spent a lifetime ensuring that their time on Earth was meaningful.  Now they are able to look forward to a new adventure together in Heaven.

Betty and George Weldon are survived by their three daughters, Ellen Jackson, Georgia Cain and Susan McCabe, 8 grandchildren, 14 great grandchildren and 1 great-great grandchild which is due in September.  They will be missed by all who had the honor to know and love them.  A Celebration of Life potluck dinner will be held following the ceremony for George and Betty at the Girdner Church Friday, March 1, at 6:30 p.m.  Cremation services are being conducted by Clinkingbeard funeral home, Ava, MO.