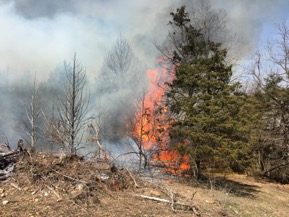 Prescribed fire or control burns, if used properly can serve as an effective management tool for maintaining land. A Prescribed Burn Workshop is scheduled for Saturday, Feb. 16, 2019, at the MSU Mtn Grove Campus, beginning at 10:00 am. The session is free, please call 417-686-5043 to register.

Humans seem to have a natural attraction to fire. People can sit around a camp fire and stare into the flames for hours watching the fire leap and dance, while enjoying the fire’s warm glow. Our ancestors probably spent many hours doing just that on long, cold winter nights. Fire in one form or another works for us every day. Whether it is used to create electricity in a coal fired power plant, a gas furnace that heats our home, water heater or a crackling fire in the fire place. But the fire I am talking about today is a different form.

There are two basic causes of fire. One is natural, and the other is human caused. Controlled burns have a long history in wildland management. Pre-agricultural societies used fire to regulate both plant and animal life. Fire history studies have documented periodic wildland fires ignited by indigenous peoples. Studies also show that fires, both naturally caused and prescribed, were once part of natural landscapes in most of Missouri.

Prescribed fire or control burns, if used properly can serve as an effective management tool for maintaining our land.

Wildlife species such as bobwhite quail thrive in landscapes that are exposed to fire. Tim Russell, MDC SW Regional Wildlife Supervisor stated that the Osage Indians who lived in Southern Missouri had a name for bobwhite quail that translated into English as “fire bird”.  Research on the Journagan Ranch shows a relationship between where prescribed fire has been applied to the land and a concentration of bobwhite quail recorded in the fall covey count surveys. Areas that have no quail before a control burn have quail afterwards.

Fire used properly can be a very effective land management tool, used unwisely can be very dangerous. It is important to have well-constructed fire breaks or burn lines in place before a control burn. Weather conditions in Missouri can change very quickly and have the greatest effect on fire behavior. Temperature, relative humidity and wind are all very Important to fire behavior. Time since last precipitation and what type of precipitation are also important factors to consider. Much of my career has been spent as a wildland fire fighter, my experience has shown me that fire burns much more intensely after a recent snow fall has melted away. I have been given several reasons for this phenomenon, but what I know is, this situation creates very unexpected fire behavior. Enough so that land managers need to take recent weather events into account when planning a prescribed fire. 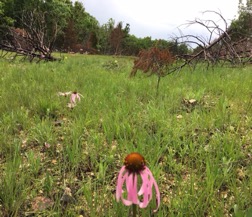 After prescribed fire, there was a huge increase in growth of the native warm season grasses and wildflowers a flush of native prairie/glade flowers and forbs. 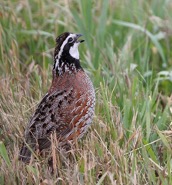 Many of the plant and animal communities natural to Missouri developed with frequent fires. For this reason, many of our native plants respond positively to fire. On Journagan Ranch after we removed eastern red cedar from the glades followed by a prescribed fire, we started seeing a huge increase in growth of the native warm season grasses and wildflowers. Areas where there had been bare ground covered with shed cedar needles were instantly full of native grasses. These plants are also ideal livestock forage. The other noticeable response was a flush of native prairie/glade flowers and forbs. These plants were on-site but had not had the opportunity to flourish due the shading from the cedars and the lack of fire. These prairie/glade flowers and forbs are also known to be important for our native pollinators.

The workshop will spend approximately 2 hours in the classroom discussing fire preparation and burn plan development. After lunch if the weather is permitting, we will travel to Journagan Ranch and conduct a prescribed fire on one of our designated locations.

If you have any interest in using prescribed fire on your property as a management tool, I highly advise you to attend this free workshop. For more information, please contact Clint Dalbom, Conservation Project Coordinator, Missouri State University, 573-247-0430.