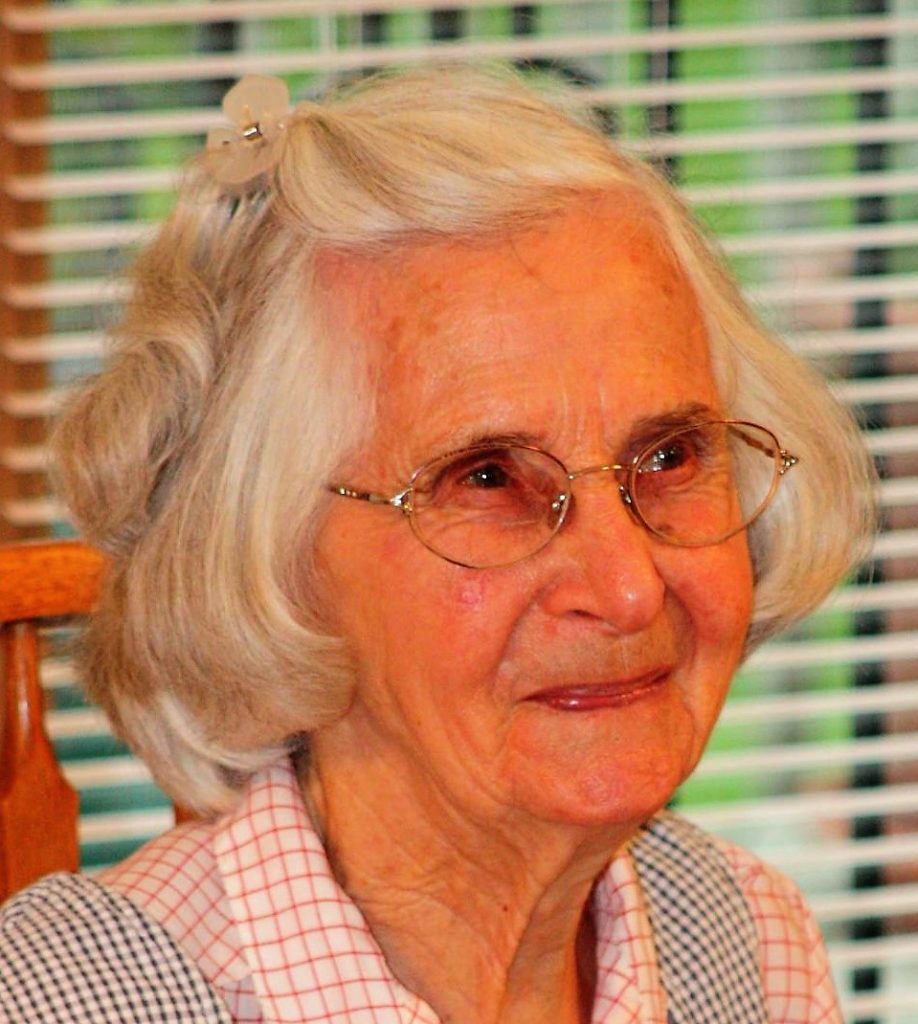 Margaret Elaine “Peggy” Tucker, 98, of Pleasant Hill, Missouri, was born June 20, 1920, in Independence, Missouri, the daughter of Walter and Emma (Pooler) Bullard.  She departed this life, Saturday, December 15, 2018, at her daughter’s home in Belton, Missouri, surrounded with love and family.

Margaret was baptized at the age of eight in the Reorganized Church of Jesus Christ of Latter Day Saints and was a lifelong member of that church.

In 1933, when she was 13, the family moved to the Missouri Ozarks and lived near Ava. She graduated from Ava High School in 1937 and attended Graceland College in Lamoni, Iowa.

On July 2, 1939 Margaret was united in marriage to Keith Douglas Tucker in Ava; they made their home in Pleasant Hill. Their household included Keith’s 2½ year old twin boys and his mother, Nina, who had moved in to care for the babies.  Keith and Margaret’s marriage produced 5 more children. Keith worked at the American Scale and Vise Company and became the superintendent; Margaret was the homemaker. They were members of the Pleasant Hill Congregation of the Reorganized Church of Jesus Christ of Latter Day Saints.   Their children attended Prairie Dell Country School and all graduated from Pleasant Hill High School.

Margaret was an avid gardener and raised much of what the family ate.  From an early age she was interested in photography and preserved many memories that her family now enjoys.  Another special interest was identifying and harvesting wild mushrooms.  At church over the years she served in many areas, including local women’s leader, stake women’s leader, and as teacher of classes for both children and adults.  She had a talent for writing poems, short stories, family histories, and published three books; To Everything There Is a Season, a Natural Food Guide; Trek of Faith; and Biography of Richard Bullard.

With the untimely death of her husband Keith on February 5, 1975, and one son still at home, she needed a source of income.  After working a couple of jobs, she opened The Little Red Hen Shop, the first wholegrain bakery in the Kansas City area.  The shop opened in 1981 in her home and later moved to Pleasant Hill and expanded to include a lunch room.  This gave her an opportunity to use her passion for promoting healthy eating.  She sold the business in 1993 at the age of 73.  Pleasant Hill was her home from 1939 to 2014 when she moved to her daughter and son-in-law’s home in Belton.

Perhaps her greatest legacy is being the loving matriarch of her big family.  She has gathered them over the years, fed them, taught them, sometimes prodded them, and always encouraged them to follow Jesus Christ.

Funeral services will be held 1:00 p.m. Thursday, December 20, 2018, at the Pleasant Hill Community of Christ Church, 1007 Timber St. & 7 Hwy.  Interment will be in the Mound Grove Cemetery, Independence.

Visitation will be held 12:00 p.m. until service time at the church on Thursday. Memorial contributions are suggested to Pleasant Hill Community of Christ Church and may be sent in care of the funeral home.

Online condolences may be sent to the family at www.stanleydickeyfuneralhome.com