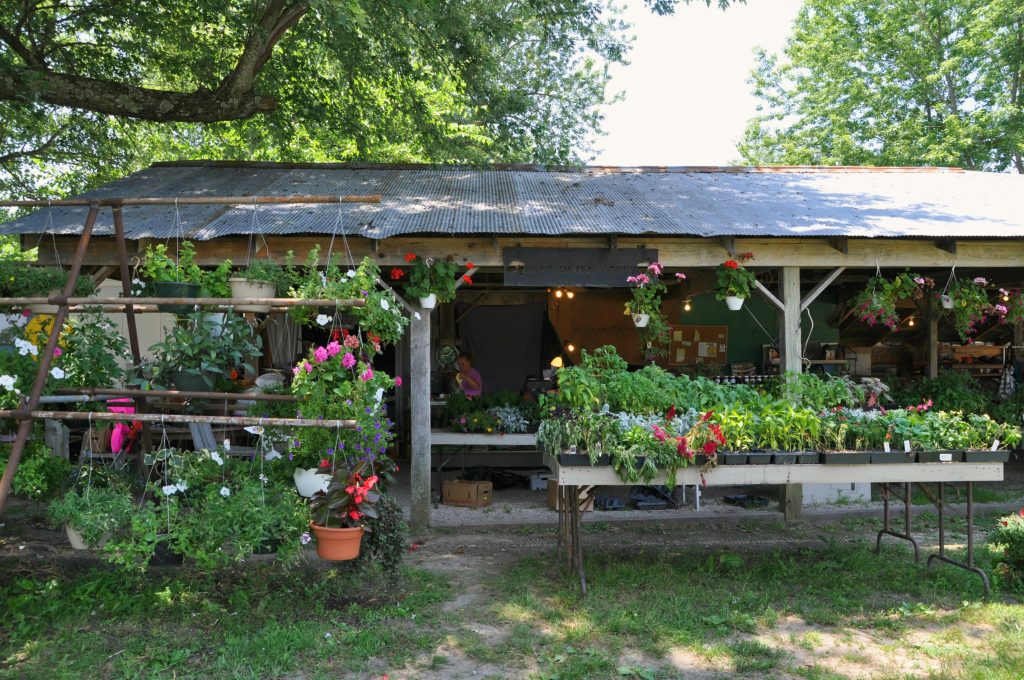 GOODHOPE – Miles-from-town Ozarks backcountry might seem like an unlikely place for a roadside produce stand — or perhaps a perfect one. 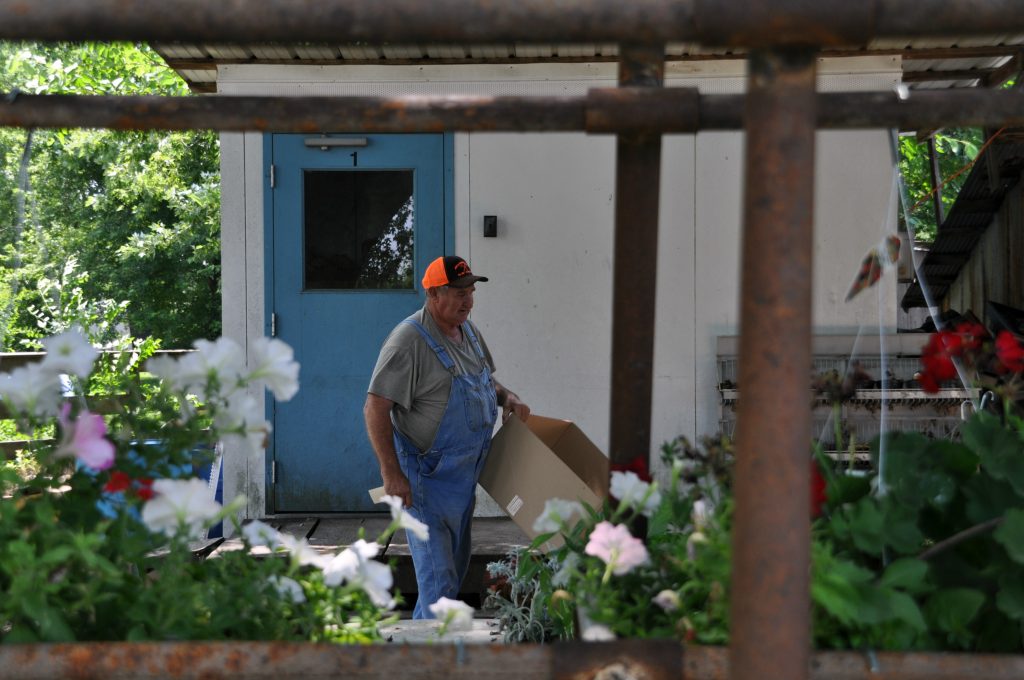 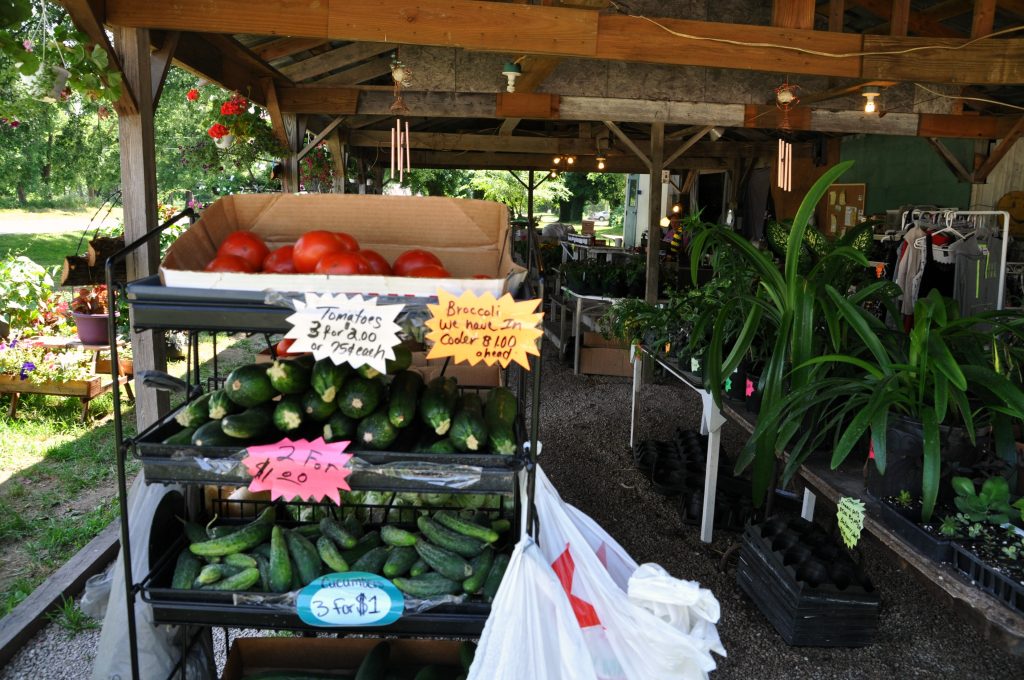 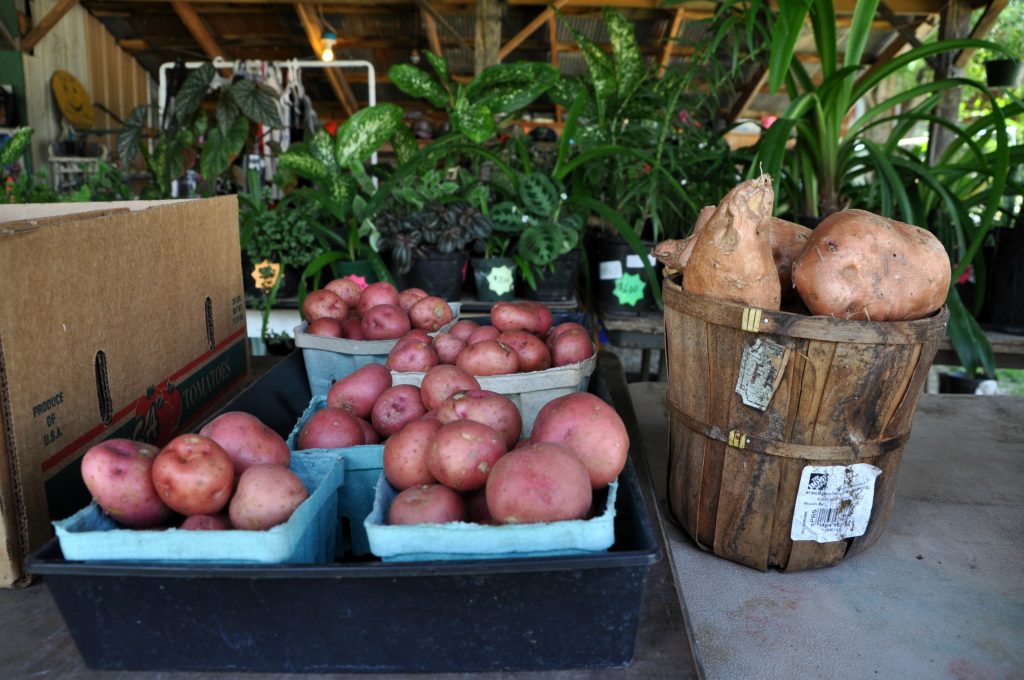 The latter seems to be true for Goodhope Produce, an open-air stand at the crossroads of Routes O and T in western Douglas County. Owned and operated by daughter-and-father duo Belinda Moore and Charlie Herrell, the roadside stand has sold locally-sourced fresh vegetables, plants and hanging baskets for around seven years.

Open every day during much of the year, the stand saves folks a trip to town. It also helps preserve the Goodhope community, which has nearly disappeared in recent years. A love of fresh produce led to the stand’s start, but its owners didn’t plan on making a business from it.

“We started going to buy for ourselves, but you had to buy a bunch of boxes at once,” says Moore, of trips to local Amish produce auctions. That fact worked out well, since neighbors started asking them to bring back extra produce.

“So we started buying for everybody,” she says. Eventually, the duo officially set up a stand near their homes, which has expanded over time to meet the growing need.

The products vary with the season: In spring and early summer, colorful hanging baskets sway gently in the breeze, waiting to be sold.

“We have a girl who comes down all the way from Willard,” says Moore, of a shopper who regularly makes the nearly 60-mile trek for their hanging baskets.

Watermelons and corn headline summer, and pumpkins and mums make appearances for fall.

Plants are also big sellers; several tables are laden heavily with them on a recent Saturday. Of course, other seasonal gems show up throughout the year, including green beans, potatoes, tomatoes, sweet potatoes, broccoli, peppers, cucumbers and squash.

“We change constantly,” says Moore of their selection.

While most of the products are still found at local Amish auctions — at which Moore and Herrell shop twice a week — others come from different sources.

Some are grown by local FFA students in Seymour and Ava. Occasionally, a neighbor with a bumper crop will offer excess veggies to be sold at the stand.

Others come to the stand to trade. “We do have some neighbors who barter with us,” says Moore, giving an example: A neighbor who makes fried hand pies for the nearby general store will come trade them at the produce stand.

Additionally, under the stand’s tin roof are knick-knacks, hats and few clothing items.

“We do sell a lot of the hats, purses and ‘piddly’ stuff, I call it,” says Moore.

The stand has helped revive Goodhope, which is smaller today than it was in the past.

The duo speaks of when things were different in the little community. Of days before life left town. Of when a drive-in movie theater (connected with the Owen family, who long operated namesake theaters in Seymour) fronted the stand. Of when the town had a store, located across the road.

But while life has slowed in Goodhope, the people are largely the same who have lived thereabouts since Moore and Herrell came to the area more than 40 years ago.

“A lot of the neighbors are still the same neighbors,” says Moore.

That community feel lends to a honor-system type existence for the stand. Although Moore and Herrell are open seven days a week for most of the year, they often make sales even when they’re not open.

“We get notes that say, ‘We took six tomatoes,’ and they left money,” says Moore. “I’ve found (money) in the freezer a few times.”

“We’ve got some older people, and some who can’t get around really well,” says Moore, who will get what items they need for them. “They’ll pull in and honk.”

In addition to individuals, the stand also sells to nearby general stores including Redbank Grocery, The Feed Bag and The Fillin’ Station, whose owners purchase produce for their made-to-order sandwiches.

And those sales help keep a sense of community.

“We just have tons of neighbors who say, ‘We’re glad you’re here,’” says Moore. “(They say), ‘You made the community so much better because we can buy fresh stuff.’”