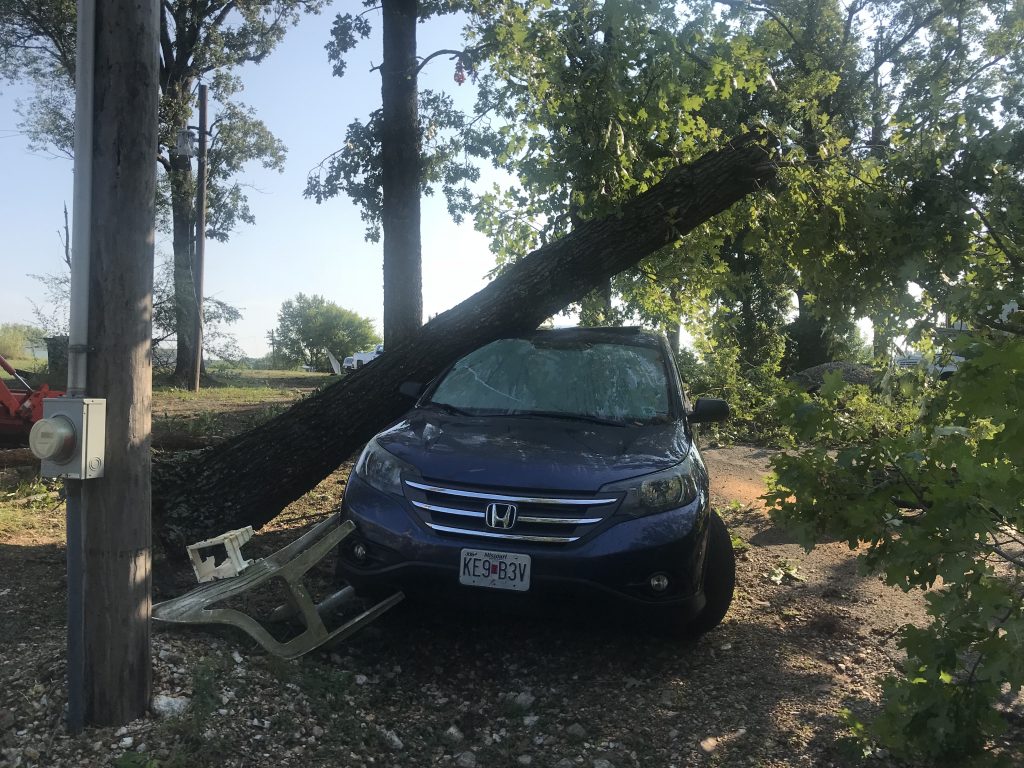 Destructive winds hit the Ava Country Club August 10, totaling four or five cars and causing extensive damage to the area.  Approximately 35 people were in the clubhouse when the storm struck. 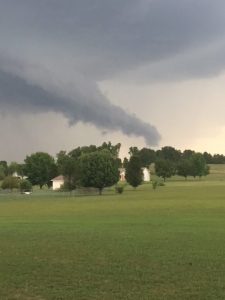 This image of the thunderstorm was taken just before the force of the storm hit the Ava Country Club on Friday, August 10.

(AVA-Mo)– High winds and rain targeted certain areas of Ava and Douglas County last week on Friday, August 10, when a storm passed over the area, leaving a path of destruction on Y Highway, as well as damage at several isolated locations in town.

Most of the heavy storm damage occurred west of Ava, in an area near or close to the Ava Country Club.  The storm and high winds hit the golf course about the time a dinner party being held at the clubhouse was concluding and approximately 35 people began to move toward the door.  However, once the storm hit with such force and a torrential downpour of rain, no one left the building.

After about 10-15 minutes, the rains began to subside and a path of destruction was evident.

At least eight trees were uprooted or broken apart by the storm, and approximately 13 golf sheds had been picked up and splintered down the hillside.  Two golf carts were sitting on top of the rubble, but the remaining 10 or 12 carts were unharmed, unmoved, and sitting as though still covered by a shed.

In the cul-de-sac parking area in front of the clubhouse, at least five cars were crushed under fallen trees, and at least five more vehicles were dented by debris and fallen limbs.

In other areas around the course, several more golf shed locations were crushed by fallen trees and carts inside damaged.

Debris, limbs and uprooted trees also  littered the golf course, but only on holes located near the clubhouse.

In town, winds uprooted several trees in residential yards, and at the Ava High School, a gum tree was uprooted leaving the tree leaning on the school building’s roof and gutters.  In several neighborhoods, high winds also damaged roof lines and siding.

To date, the severe thunderstorm has not been classified, but it has been suggested the damage near Country Club was caused by a microburst, or by tornadic activity. Microbursts are dangerous and severe weather phenomenons that can cause great damage with little or no warning.  A microburst event  is defined as an intense downdraft of horizontal winds that hit the ground with so much force it causes extensive damage.

Club members worked well into the night on Friday to help release crushed vehicles and make certain items were secure and safe before leaving.  The clean-up effort on Saturday was non-stop as residents, club members, the City of Ava electrical department, and many others pitched in to help. Many forfeited the entire day to assist in the storm clean-up.  Assistance was also provided by several high school groups, including the cross country team, football team members, and the girls’ softball team. 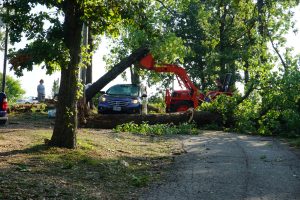 Keith Jones is shown above positioning the tractor bucket to hoist a tree off of a vehicle at the Country Club on Saturday.  The car above is just one of several crushed by uprooted trees.  Jones, Lionel Daugherty, Fred Bacorn and Mark Wendler all used tractors to move debris and tree limbs from the site. 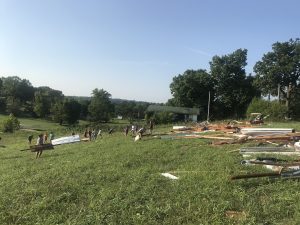 Student members of several Ava R-I sports programs assisted in the clean-up at the Ava Country Club on Saturday. The high school girls shown above helped clean up golf cart shed debris that was scattered across the hill during the storm.